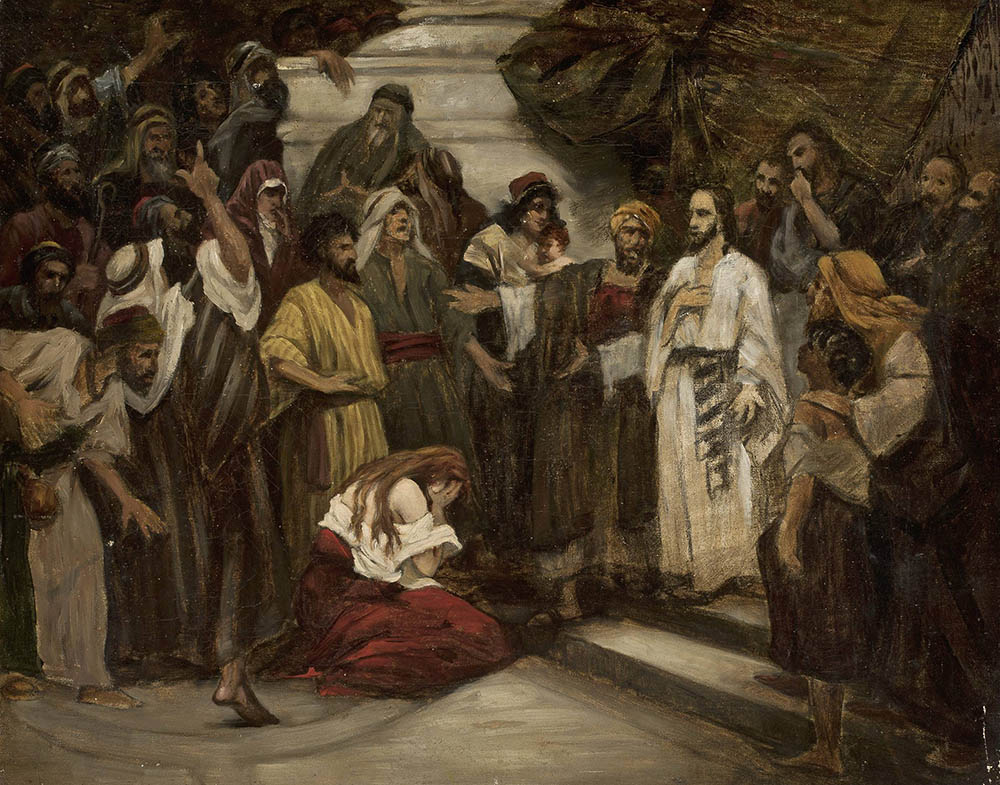 Today, in a story unusual for the Gospel of John, we meet an unnamed woman famous because Jesus saved her from a crowd who were out to get him.

Picture today’s passion-filled Gospel scene. It opens when a group of meticulously righteous prigs interrupt Jesus as he is teaching near the Temple. They incorporate Jesus in the periphery of the circle they form around a helpless, probably angry and disheveled woman. It’s all a setup for them to demand that he pronounce his opinion about how to respond to adultery.

They think they have designed the perfect no-win situation: Jesus has to choose between contradicting God’s law and being an accomplice to stoning their prey, a woman about whom they care no more than fishermen care about the worms they secure to their hooks.

The opening line of today’s first reading from Isaiah describes God as the one who “opens a way in the sea and a path in the mighty waters.” It goes on to quote God as saying, “Remember not the events of the past ... see, I am doing something new.”

When that crowd of bullies set their stage, they weren’t counting on Jesus to represent the God Isaiah described. The gang who shamed the woman — who was probably not standing there in anything akin to meek silence — amassed a crowd of onlookers and created a tumult comparable to a stormy sea as they misquoted chapter and verse about the punishment she deserved. (The law of Moses is not as specific as they say about stoning, and generally includes the man in the punishment. See Deuteronomy 22 and Leviticus 20.)

How to respond to the mob? Jesus chose gesture and silence. He bent down and using just one finger, he wrote in the dust. What was he teaching with his silent sign? Was it a reminder that the law came from the finger of God (Exodus 31:18)? Might it have been a citation of Ezekiel 16:36-40 in which God accuses unfaithful Israel of adultery? Perhaps he simply wrote the name of Hosea, the prophet whose life mirrored God’s own as the betrayed spouse of the chosen people.

Whatever Jesus wrote, it indicted every person in the crowd, dousing their pretentiousness in a cold bath of self-recognition. With all their bravado, no one had another word to say when Jesus invited the sinless one to cast the first stone.

When all was said and done, in the words of St. Augustine, "the two of them alone remained: mercy with misery.”

We know the name of the one Augustine called mercy. In honor of her newly recovered dignity, let us call the other Kalena, a Greek name with roots in words for both beloved and tortured.

The twist in the story is that the bullies unwittingly cemented a unique communion between Jesus and Kalena. Bringing them together as objects of their manipulation, they gave Jesus free rein to do what he did best: invite another into new life. Those who scorned him for consorting with sinners threw him together with someone who needed his kind of freeing love.

Just as had happened for the Israelite slaves in Egypt, oppression and hatred became the occasion to bring this victim more deeply into contact with her God.

The scene we contemplate today has delicious irony. In effect, the crowd who brings the woman to Jesus has acted like the people who carried their sick to be healed; in the attempt to damn her, they introduced her into the realm of grace. Instead of trapping Jesus, they were forced to judge themselves by the implications of their cherished law.

In the end, Kalena is the one who could say with Paul, “I have indeed been taken possession of by Jesus Christ.”

Today, we are invited to contemplate Jesus as the embodiment and sign of God who is ever bringing about something new. As we come to appreciate his ways, as Isaiah promises, we will be formed by God. According to Isaiah, we will be drawn to stop dwelling on the past in order to see what grace makes possible.

A version of this story appeared in the March 18-31, 2022 print issue under the headline: Invited into new life.