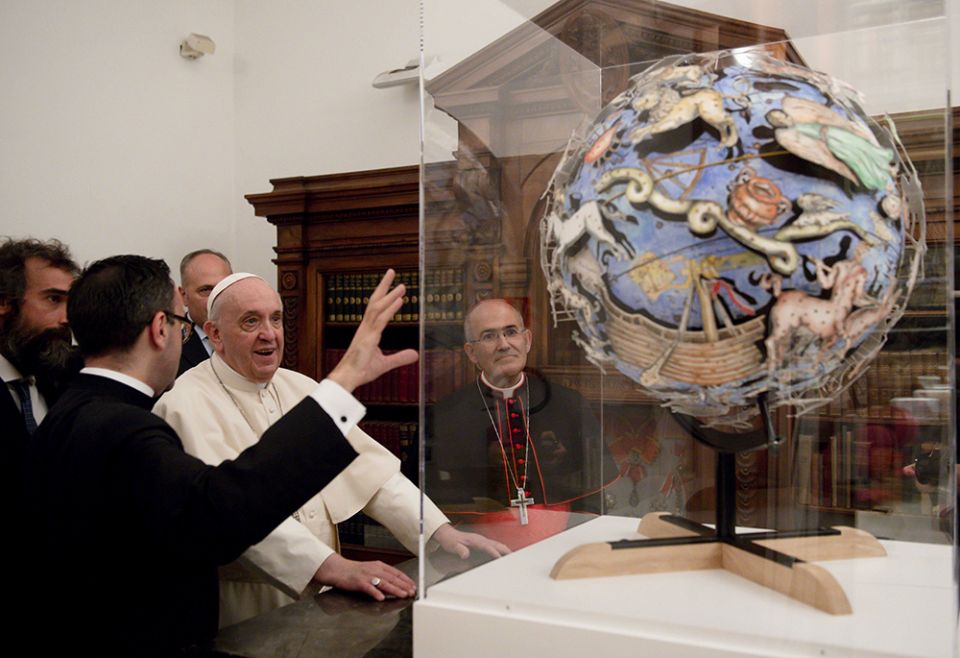 Pope Francis looks at a globe as he inaugurates a new permanent exhibition space in the Vatican Library Nov. 5, 2021. The first exhibit, "Tutti. Humanity on the Way," references the pope's call for people to focus not on borders but on what makes them brothers and sisters. Also pictured is Cardinal Jose Tolentino Calaca de Mendonca, Vatican archivist and librarian. (CNS/Vatican Media)

The historical sections of the Hebrew Scriptures sometimes read like PG-rated dramas seasoned with a measure of bawdy humor. Today's story from 1 Samuel recounts the second time David refused to assassinate Saul, the manic king of Israel. In the first story (1 Samuel 24:1-16), David caught Saul in a very embarrassing and vulnerable position. In both incidents, David refused to murder the man who alternately would either try to kill him or refer to him as his own son. Although David spared Saul's life out of respect for his divinely appointed office, he was not fool enough to accept Saul's invitation to join his camp. David became king only after Saul was killed in battle by another enemy.

This tale about David and Saul creates a backdrop for Jesus' teaching about love of the enemy. Both Luke and Matthew record this sermon — Matthew situates it on a mountain, Luke on a plain — and each approaches it differently. Matthew continually connects Jesus' teaching to Israel's traditions; Luke seems to focus more on relationships and the world they create. (Remember, Luke is the evangelist who records stories like the good Samaritan and the prodigal son.)

What we could easily miss in this section of the Sermon on the Plain is Jesus' backdoor critique of what we might call "good communities." Jesus' words here might be aimed directly at those of us who are members of a great parish with nourishing worship and generous social services. Today, Jesus looks at us and says, "What credit do you expect for loving those who are good to you? The Mafia is famous for doing that much — in fact, they may well outdo you in caring for their own!"

Jesus suggests that we lend to those from whom we don't expect repayment. That might be charitable, but think about the other side: receiving without a way of repaying seems demeaning, downright embarrassing, even un-American! We want things to be fair. By that we usually mean equal: you lend me $50, I agree to repay $50. You are kind and I am just. Our system presumes that "equality" keeps us parallel, as if on a precarious teeter-totter. Striving for that goal, we end up paying so much attention to the balancing act that we can hardly attend to anything else. On the other hand, lending without expecting repayment probably means we are lending to those who need it most.

This is where Jesus is leading us. He bases his advice on the belief that humanity will be happiest living as a family that shares a common home. He knows that one who lends without expecting anything back believes that the goods of this earth are for the common good. Following that logic, those who have more at their disposal can and should exercise the freedom to dispose of their goods with the understanding that people in need have a basic human right to the surplus of the wealthy. (That's not communist, it's the teaching of St. John Chrysostom among others.)

If this is not challenging enough, Jesus doubles down on the topic of loving our enemies. In our first reading, David rejected his chance to murder Saul out of respect for God who anointed Saul to be king. Jesus asks for more than that when he says, "Do good to your enemies." This leads into what Pope Francis calls the hard work and craftsmanship of building peace (Fratelli Tutti, Paragraph 217).

According to Francis, peace among those who have been enemies, be they the perpetrators or the victims, "is a patient effort to seek truth and justice, to honor the memory of victims and to open the way, step by step, to a shared hope stronger than the desire for vengeance" (Fratelli Tutti, Paragraph 226). Francis gives us details that concretize Jesus' call in the Sermon on the Plain.

There is no getting around it: Jesus demands a great deal of those who would be his blessed, happy disciples. Most of us in the U.S. have what we need and more. All of us have known some kind of PG-13 drama in life. Today's Gospel interrogates our conscience. Which is harder to give up, our excess goods or our resentments? Do we care enough about the poor to forfeit some comfort? Are we willing to try to understand people with whom we strongly disagree?

The challenge of today's Gospel is to believe that the alternative Jesus offers is possible. Francis suggests that the way into that possibility is to cultivate shared hope. That implies that we contemplate Jesus enough to begin to share his vision of the world, a vision he described as the reign of God.

This story appeared in the Feb 4-17, 2022 print issue under the headline: We must believe in Jesus' vision .

Column | Seventh Sunday in Ordinary Time: We must believe in Jesus' vision

Pope’s quotes: The Gospel of the marginalized