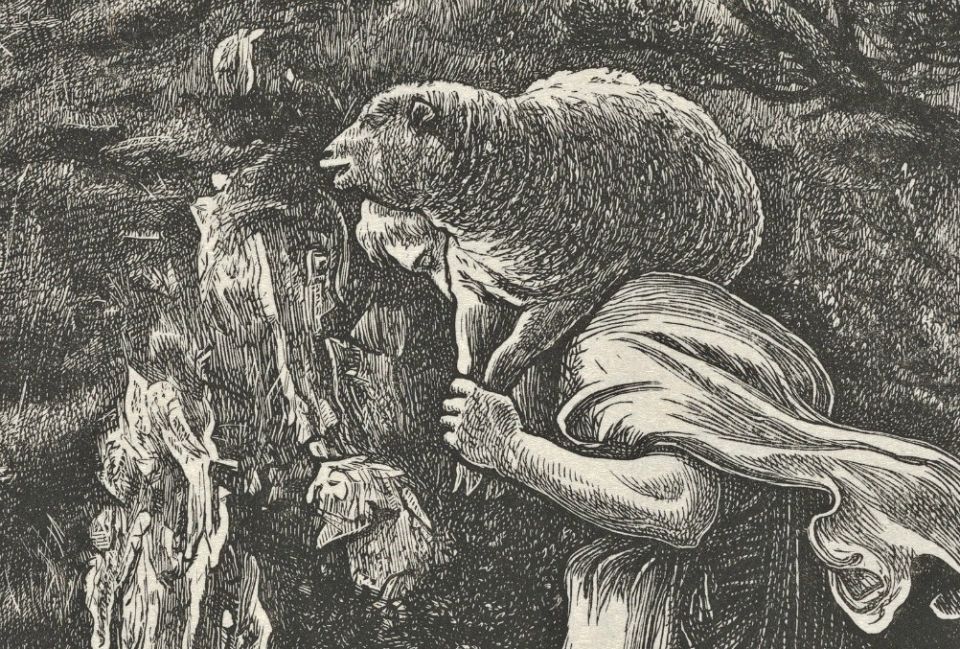 Detail from "The Lost Sheep (The Parables of Our Lord and Savior Jesus Christ)," an 1864 engraving by the Dalziel Brothers, after Sir John Everett Millais (Wikimedia Commons/Metropolitan Museum of Art)

"A clean heart create for me, O God, and a steadfast spirit renew in me." This line from today's Psalm is one of the prayers that ought to come with a warning label. The side effects of praying like this are unpredictable and often uncomfortable. If it works, you will never be the same.

Look at Moses. In today's first reading, God offered Moses the chance to ditch the chosen people and replace them with his own clan. But Moses had already given his heart to the Israelites — they were as much his own as were his closest relatives. That's what a clean heart can do to you — you might look privilege in the eye and say no.

There's a subversive dynamic embedded in this psalm. In prayer, we usually ask God for favors that will change our circumstances or those of others. In Psalm 51, we begin by admitting that what we want changed is ourselves: our way of being, of acting, and of seeing things.

We can't ask for a clean heart without admitting that the one we have — and probably cling to — is less than what we want it to be. In terms that Ignatius of Loyola might use, Psalm 51 asks God to transform our very desires so that our hearts may become larger and filled with integrity.

Paul is on the same track in today's second reading. He admits the horrendous errors of his past, only to rejoice in God's mercy. We hear contemporary echoes of Paul in people who participate in 12-step meetings. They cultivate gratitude for where God's grace has brought them.

Today's Gospel reorients what we may have gleaned from the other readings. Those were variations on the call to repentance. The Gospel diverts our gaze from self-absorbed sorrow for sin to the humbling joy of being forgiven.

Jesus addresses his three-part parable discourse to devout people who complain that he gives religion a bad name by hanging out with and even eating with delinquents. To understand this in context, we need to remember that for the Jewish people of Jesus' day, sharing a meal was what we would call sacramental; eating with people was the equivalent of sharing Communion with them.

In response to his critics, Jesus doesn't criticize anybody. He starts by talking about a shepherd — one of Israel's favorite images of God. The trouble is that this shepherd seems extravagantly, even foolishly, attached to one of his sheep. In the absence of a corral or well-trained dogs, sheep have the tendency to scatter; they'll wander after one another and even follow a lousy leader right into the heart of danger.

Jesus asks the group, "What one among you would not leave 99 and go after one stray?" The sane answer to his question is, "None of us would do that! Why risk 99 the sake of one?"

The next example sounds just as capricious. A woman has 10 drachmae, coins of relatively small value. Upon losing just one, she becomes a whirlwind of housecleaning, making the dust fly until she recovers it. Then she throws party to show the neighborhood that nothing gets lost under her watch.

Obviously, the irrational shepherd and the zealous homemaker represent God. Referring to the shepherd and his stray, Jesus proclaims that heaven will rejoice more over their reunion than over 99 who simply graze in place. Holding up the woman as a symbol of God, Jesus declares that the angels themselves will rejoice with her when she finds what had been lost.

Finally, we come to Jesus' most popular parable: the prodigal family. To Hebrew ears, this parable summarized much of salvation history.

Jesus describes a father who wanted only to give his sons everything he had. One son wasted it on high living, and the other squandered it by thinking of himself as a slave, never taking advantage of what his dad offered. The father had to lure them through rebellion and righteousness before their hearts were ready to enjoy their inheritance.

Today, as we pray for a clean heart, Luke teaches us that sharing God's heart will catapult us into prodigal freedom. God's first concern is always for the lost. That includes us, whether we have brought it on ourselves by straying or through the self-righteousness of thinking we can and should earn what God offers for free.

To pray for a clean heart is to risk a conversion like that of the wild, wandering son or St. Paul, the self-righteous zealot. Their hearts changed when they realized that God delights in them, not because they never strayed, but because they got on the road toward home.

Column | Twenty-Fourth Sunday in Ordinary Time: Rejoice to find what was lost