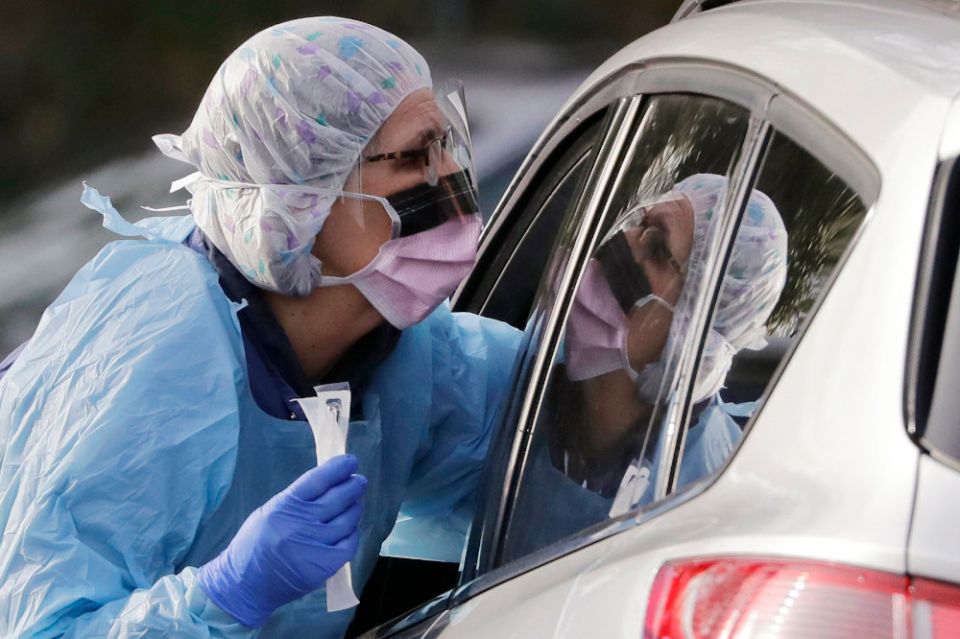 Laurie Kuypers, a registered nurse, reaches into a car to take a nasopharyngeal swab from a patient at a drive-through COVID-19 coronavirus testing station for University of Washington Medicine patients Tuesday, March 17, 2020, in Seattle. The appointment-only drive-through clinic began a day earlier. Health authorities in Washington reported more COVID19 deaths in the state that has been hardest hit by the outbreak. (AP/Elaine Thompson)

The time is already past to admit that the coronavirus pandemic in the United States is a moral crisis, not simply a public health and economic crisis.

While a certain amount of confusion back in February at the beginning of the crisis is understandable, today it is unforgivable. Bad leadership has cost thousands of lives and millions of jobs.

A large part of the failure has been in separating the economic crisis from the public health crisis when in fact they are intimately related. Until consumers and workers feel safe, the economy cannot revive. Nor should we take the stock market as the key measure of the country's health, rather than the lives of ordinary people.

It can be difficult to see this as a moral crisis because what is needed is not heroic action, but simple acts that everyone must do. People simply need to wear masks, keep social distance and wash their hands. Employers need to provide working conditions where that is possible.

These are practices that public health experts have taught for decades. Too many in the United States have ignored them. Warnings about masks, for example, have been ignored.

For its part, government needs to enforce these measures, expand testing on a massive scale, do contact tracing and help people isolate themselves if they test positive. Instead, government, especially at the federal level, has failed. Businesses, especially bars, restaurants and entertainment venues, have remained open or been reopened too soon.

That it is possible to do the right thing and control the virus is obvious from the examples of South Korea, Thailand, New Zealand, China, Vietnam, most of Europe, New York, Massachusetts and Connecticut.

There is also the sin of presumption of those who trust in God to protect them from the virus while doing nothing themselves. Those who left it to the Lord forgot that "God helps those who help themselves." There is also an arrogance in seeing ourselves as different from other mortals like us. Areas where people insisted they were somehow immune to this "blue" big-city virus have now been hit with comparable or worse infection rates.

The U.S.' failed response to the coronavirus has made us the laughingstock of the world. We have done so badly that Europe does not want visitors from the U.S. Even Italy, whose people commonly ignore rules and are not famous for efficiency, has done better than we have.

The countries that responded swiftly and effectively to the virus are now beginning to restore their economies. Many U.S. states that reopened too soon are now facing the need to close again.

We can and should do better.

We can do better by continuing to soften the economic fallout from the coronavirus. At the end of this month, the extra $600-a-month payment in federal unemployment benefits mandated by Congress in the Cares Act will expire.

Republicans complain that, under this program, some receiving expanded benefits will not return to work because they are getting more money than they did when they were employed.

Given the few jobs available, this is a silly argument. In addition, it shows how poorly paid these workers were in the first place. As an emergency measure, this payment must be extended lest these unemployed workers be cast into dire poverty. Then Congress should see to it that essential workers who have put their lives and their families at risk to keep the economy going are paid at least $15 an hour.

Another provision of the Cares Act expiring at the end of the month is protection from eviction for renters and homeowners who cannot keep up with payments to their landlords and banks because they got sick or lost their jobs.

The last thing we need during the pandemic is a flood of evictions putting more people on the streets. Small landlords who have lost rental income need compensatory protection from banks to whom they owe interest payments on loans.

If the Federal Reserve Board rescues banks, it would be criminal for it not to require these banks to provide relief to small businesses. Otherwise, the economic crisis will result in the failure of many small businesses and the further concentration of wealth in the hands of a few.

Large companies, who have access to bank loans, will benefit as the deepening depression puts smaller competitors out of business. They will also be able to buy up smaller businesses at fire-sale prices.

When the recession is over, we will see fewer family-owned businesses like farms, restaurants and stores. They will be replaced by large corporations operating through franchises and chains. That some of these large corporations got government money meant for small businesses is a scandal.

The stock market is doing fine. The government does not need to bail out large firms listed on the stock exchanges. It must focus on saving workers and small businesses.

It is criminal that the Cares Act also included million-dollar bailouts for billionaire real estate investors. Senators who hid this bailout for their donors in the Cares Act should be ashamed. This must be repealed.

In addition, there is no reason the new Cares Act should not have a tax increase on the wealthy who are doing fine during the recession.

Morality is not just about sex and family values. It is about how we treat one another. Today, it is especially about how we respond to the COVID-19 pandemic and the economic crisis caused by the virus. To put a person's life at risk by not wearing a mask is not freedom, it is recklessness. Not to help those who are sick and unemployed is not frugality, it is selfishness.

Column | COVID-19 is more than a public health challenge: It's a moral test

The church after coronavirus: How our communities are changing