Signs of the Times 2.jpg 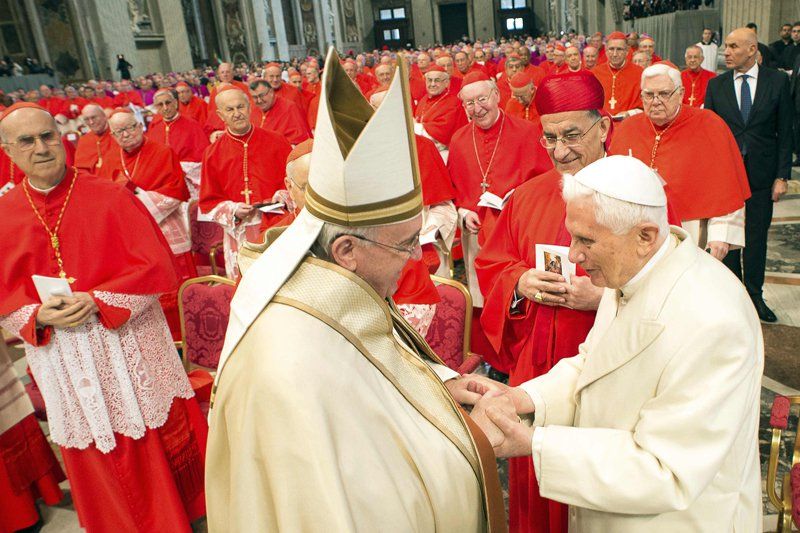 Pope Francis, left, greets Emeritus Pope Benedict XVI during a Mass to create 20 new cardinals during a ceremony in St. Peter’s Basilica at the Vatican on Feb. 14, 2015. (Courtesy Osservatore Romano)

Pope Francis continues to remake the College of Cardinals so that almost half of the men who will pick his successor have been chosen by him. He will create 14 new cardinals on June 29, 11 of whom are under 80 years of age and therefore able to vote in a papal conclave.

These 11 new cardinals are added to the 48 electors already appointed by Francis to make 47 percent of the cardinal electors who will choose the next pope. Remaining among the 125 electors are 47 appointed by Pope Benedict XVI and 19 appointed by St. John Paul II.

Next year, another 10 cardinals will turn 80 years of age and become ineligible to vote in a conclave, allowing Francis to make more appointments.

Francis continues to break tradition by passing over the archbishops of large European and American archdioceses who have usually been made cardinals. Rather, he picked bishops from Iraq, Pakistan, Japan, Peru, Madagascar and L’Aquila, a small city in southern Italy that suffered from a major earthquake in 2009.

None of the new cardinals is from the United States, which currently has 10 cardinal electors.

As a result of his appointments, Francis has reduced the Italian faction among the electors to 18 percent, down from 24 percent when he was elected in 2013. This number is still 1 percentage point higher than when Benedict was elected in 2005. The Italians are simply back to their traditional quota under John Paul before Benedict increased their numbers.

Eastern Europeans have also continued to lose their percentage of the college, as they did under Benedict. They are now down to 7 percent of the electors from a high of 13 percent under John Paul, who increased their number significantly at the expense of Italy. Western Europe (minus Italy) has continued fairly steady for decades, now at 18 percent.

The real winners under Francis have been Asia and Africa, now 14 percent and 13 percent respectively. These are the highest percentages that they have ever had. At the conclave that elected Francis, they each had 9 percent of the electors.

Surprisingly, unlike John Paul, Francis has not significantly increased the percentage of the college from his part of the world, Latin America. After June, Latin America will have only 18 percent of the electors, less than 2 percentage points higher than when he was elected. Latin America actually had more cardinals (27) back in 2001.

Francis has also significantly reduced the Roman Curia’s hold over the electoral college. They will be 26 percent of the college, down from 35 percent when he was elected. But again, this is not revolutionary. The Curia’s control of the college was only 24 percent at the election of Benedict.

When it comes to Italy and the Roman Curia in the College of Cardinals, Francis is not revolutionary. He is just getting back to the numbers under John Paul after Benedict knocked them out of whack.

And while Francis has been more generous with Asia and Africa, they are still dwarfed by Europe, which has 42 percent of the electors. In fact, Europe has almost as many cardinal electors as Asia, Africa and Latin America combined.

Change comes very slowly in the Catholic Church, even under Pope Francis.

Australian court to say if it will hear Cardinal Pell's appeal