'I have made serious mistakes,' says pope. 'I ask forgiveness.' 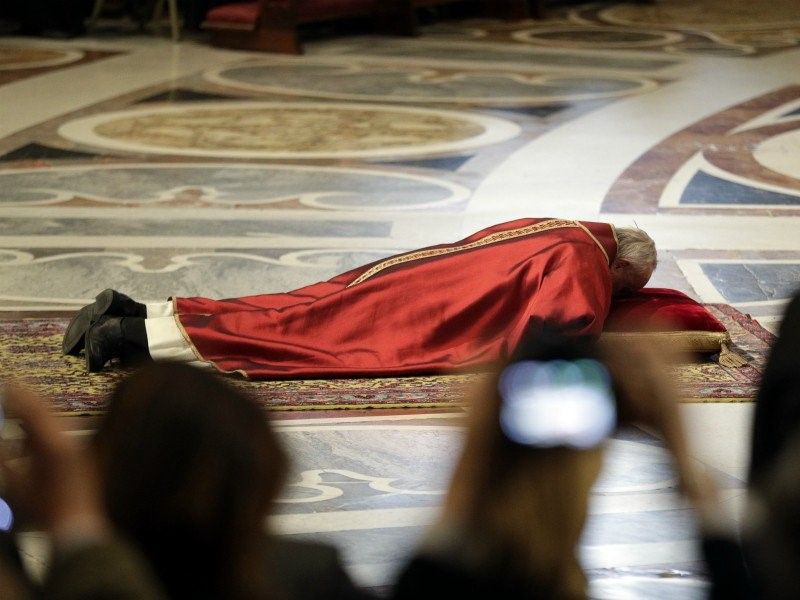 Pope Francis lies down in prayer during the Good Friday Passion of Christ Mass inside St. Peter's Basilica at the Vatican on March 30, 2018. (AP/Andrew Medichini)

The catchphrase "Love means never having to say you're sorry" was more memorable than the film "Love Story," where it was uttered twice. At first the words sounded nice, but on reflection they made no sense at all, especially to a Christian.

What could be more loving?

Lawyers often tell their clients never to say they are sorry lest it be taken as an acknowledgment of guilt and liability. During the sexual abuse crisis, Catholic bishops who followed this legal advice got in lots of trouble.

Authority figures often fear admitting mistakes to avoid undermining their credibility. This is why many in the Roman Curia thought Pope John Paul II was crazy when, as part of the celebration of two millennia of Christianity, he decided not only to celebrate the achievements of 2,000 years of Christianity but also to ask for forgiveness for the sins of the church during the same period. Such an admission, they thought, would weaken the authority of the church. After all, if the church made mistakes in the past, it could make mistakes in the future, so why should people follow it?

Of course, the opposite happened. John Paul gained credibility and respect for his honesty.

In his recent letter to Chilean bishops, Pope Francis has admitted he made "grave errors" in judgment in dealing with the sexual abuse crisis there. He had defended Bishop Juan Barros, who was accused of knowing about the abuse done by the Rev. Fernando Karadima but doing nothing about it. Francis said there was no proof. He even accused the bishop's accusers of "calumny."

Eventually, Francis did the right thing and sent Maltese Archbishop Charles Scicluna to investigate. Scicluna has a reputation for being a dogged investigator who follows the evidence. He is the one who got the goods on the Rev. Marcial Maciel, a sexual predator and founder of the Legionaries of Christ.

Scicluna is one of the few clerics trusted by survivors of sexual abuse. His 2,300-page report based on 64 interviews forced the pope to acknowledge with "pain and shame" the "many crucified lives" of those who were victims of abuse.

The pope admitted he was wrong and apologized. This was not a "non-apology apology," but a full-throated admission that he had messed up.

"I have made serious mistakes in the assessment and perception of the situation," he wrote. He said this was due to a "lack of truthful and balanced information," but it was still his mistake.

"I ask forgiveness from all those I offended," he said, "and I hope to be able to do so personally, in the coming weeks, in the meetings I will have with representatives of the people who were interviewed."

The pope has asked the Chilean bishops to come to Rome to assist him "in discerning the short, mid- and long-term measures that must be adopted to re-establish ecclesial communion in Chile, with the goal of repairing as much as possible the scandal and re-establishing justice."

Popes are not supposed to make mistakes. And if they do, the church tends to wait decades — if not centuries — before admitting it. But Francis from the beginning of his papacy has admitted that he is a sinner like every other Christian. He made a mistake, corrected it, asked for forgiveness. That is what it means to be a Christian.

Catholics should remember that priests and their congregations begin every Eucharist with an admission of sins: "I confess to almighty God, and to you my brothers and sisters, that I have greatly sinned in my thoughts and in my words, in what I have done and in what I have failed to do."

In the Catholic Church, love means always having to say you're sorry.

Column | 'I have made serious mistakes,' says pope. 'I ask forgiveness.'