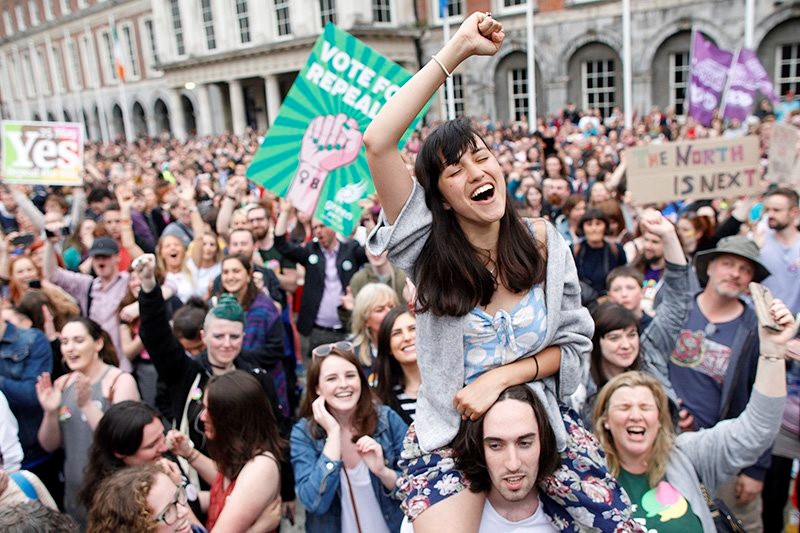 People from the “Yes” campaign react after the final result was announced in the Irish referendum on the 8th Amendment of the Irish Constitution at Dublin Castle, in Dublin, Ireland, on May 26, 2018. Ireland appeared to move away from its conservative Roman Catholic roots and embrace a more liberal view as voters repealed a constitutional ban on abortion. (AP/Peter Morrison)

The overwhelming vote in Ireland in favor of allowing access to abortion shows that the pro-life movement needs a new strategy. Trying to preserve anti-abortion laws or trying to reverse the legalization of abortion is simply not working.

In almost every country where abortion has been on the ballot, abortion has won. Rarely have pro-choice laws been reversed. This trend is not going to change. To think otherwise is simply ignoring reality.

The American pro-life movement still holds out hope that the U.S. Supreme Court will reverse Roe v. Wade, but even if that does happen, most Americans will still live in states where abortion is legal. Those who don't will be able to travel to a state where it is, just as Irish women have long traveled to Britain.

The reality is that most Americans think that abortion should be legal even if they think it is immoral. There is no indication that this thinking will change. In fact, opinion is moving in the opposite direction, thanks to the attitudes of younger generations. The Pew Research Center shows Americans under 50 are more likely than their elders to support abortion in all or most cases. Likewise, in Ireland, younger people voted more strongly to change the law. Time is on the side of the pro-choice movement.

If making abortion illegal is an impossible goal, what should be the pro-life strategy for the foreseeable future?

The answer is simple and obvious: work to reduce the number of abortions.

When women are asked why they are having an abortion, the main reasons given are that having a baby would interfere with their education, their work or their ability to care for the children they are already raising, or that they simply cannot afford another child at the time.

Pro-life activists must take these reasons into consideration when developing a new strategy.

Read this next: We must keep fighting to outlaw abortion: A response to Thomas Reese

Pro-life advocates should strongly support programs that give women a real choice — increasing the minimum wage, free or affordable daycare for working and student moms, free or affordable healthcare for mothers and their children, parental leave programs, education and job-training programs, income and food supplements, etc.

In short, the pro-life movement must support any program that lessens the burden on mothers and their children.

No longer should Republicans be allowed to call themselves pro-life if they vote down programs that would help mothers and their children. In the early 1990s, Republicans in the New Jersey legislature voted not to increase benefits for women on welfare if they have additional children. Thus, a mother with two children would have to take care of three with no increase in support. The consequences were quick and predictable: an increase in the number of abortions among women on welfare.

If abortion is never going to be illegal, pro-lifers must consider voting for candidates, even pro-choice Democrats, who will reduce the number of abortions by supporting programs that help mothers and their children. It is no accident that the number of abortions went down during the two most recent Democratic administrations, according to the CDC. (Clinton: 1,330,414 abortions in 1993 to 857,457 in 2000; Obama: 789,217 in 2009 to 652,639 in 2014).

Pro-life voters must choose between Republican rhetoric and Democratic results.

Churches must also step up. In today's world, an unwed woman willing to give birth should be treated as a hero, not a whore. She is not the only unmarried woman in her age group who got pregnant, let alone the only person having sex. Yet, she is the one brave enough to choose life. Shame on the Pharisees who try to shame her.

Schools, too, must do more to help these women. Universities today talk much about diversity, but one of the most underrepresented groups on campuses is single mothers. Universities, especially Catholic universities, must design programs and housing to meet their needs. Such programs would benefit not only the mothers and their children but also other students. Perhaps they'd learn that "It takes a dorm to raise a child."

Those who consider artificial contraception to be wrong must also recognize that abortion is a greater evil. When forced to choose, one must choose the lesser of two evils.

The contraceptive mandate of the Obama Administration will do more to reduce the number of abortions than all of the legislative gimmicks of Republican legislators. If European Catholic institutions can pay money into national health programs that perform abortions, then American Catholic employers can pay for insurance programs that pay for birth control.

And while I would be happy to see Planned Parenthood put out of business, closing clinics that provide healthcare and birth control to women before replacements are up and running is irresponsible and counterproductive.

The goal of supporting mothers and children and decreasing the number of unplanned pregnancies should receive bipartisan support. While many people doubtless support these programs as ends in themselves, there is no reason the pro-life movement should not support them as means of reducing abortions.

The number of abortions in the United States peaked in 1990 at 1,429,247. Working together, we could reasonably get abortions down to under 100,000 per year — far too many, but an achievable goal and better than where we are today.

A version of this story appeared in the June 15-28, 2018 print issue under the headline: Irish vote shows need for new pro-life strategy.