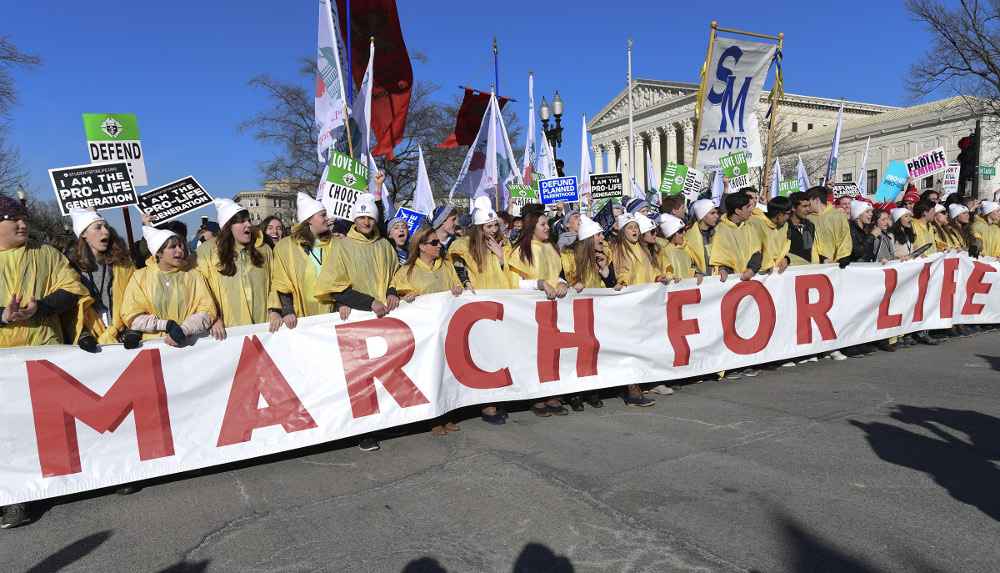 People participate in the March for Life near the Supreme Court in Washington, on Jan. 19, 2018. (AP/Susan Walsh)

The Rev. Thomas J. Reese recently suggested that the pro-life movement should accept the sad fact of legalized abortion, and now simply work to reduce the number of pre-born babies whose lives are brutally ended. While appreciating any thoughtful conversation and counsel on this pivotal issue, and agreeing with some of his suggestions for reducing abortions, as chairman of the U.S. Conference of Catholic Bishops Committee on Pro-Life Activities, I want to indicate my serious reservations about Reese’s strategy, considering it a capitulation to the abortion culture, and a grave weakening of the powerful pro-life witness.

His main assertion — that we give up all efforts to legally protect unborn human life, and work only to reduce the number of abortions — is an unnecessary dichotomy. Catholic tradition and basic human rights teach us that every human being has an inalienable right to life that must be recognized and protected in law. While the law is not the only means of protecting life, it plays a key and decisive role in affecting both human behavior and thinking. We cannot give up!

At the same time, he is right: We must offer loving support to meet the needs of women experiencing an unplanned pregnancy. The pro-life movement has a long history of such dedication to this united mission through the formation, funding and staffing of thousands of pregnancy resource centers. The movement has advocated for public policies that seek to ensure that pregnant mothers are never abandoned to the violence of abortion and that mothers and babies receive the support and protection society can offer.

He also has a point that some polls do show a diminishing support for restrictive abortion laws. Not all do, with other research indicating that more and more Americans want more rigorous limits on abortion.

However, Reese would rightly be disappointed, as would I, if pro-immigration reformers were to give up because polls discourage them. We would lament if anti-capital punishment advocates in some states were to surrender because of polls showing their fellow citizens were not on their side. I expect he would laudably urge them to persevere. Why not pro-lifers?

One of Reese’s most troubling assertions is that contraception should be used to reduce abortions. In addition to rejecting the church’s teaching that contraception is itself morally flawed, and the fact that it can be medically harmful to women, his reasoning is questionable.

In reality, more than half of women seeking abortion were actually using contraception during the month they became pregnant, and studies have shown that once contraception is more widely available, abortion rates may actually rise!

Another reality is that some contraceptive drugs and devices may work by preventing the newly conceived embryo from implanting in the womb and surviving. It is difficult to claim that we can reduce abortions by promoting drugs that may sometimes induce an early abortion.

Reese’s strategy reminds me of those in the mid-19th century who proposed amelioration as a way to reduce slavery in our country. The ameliorists argued that, sure, slavery was awful, but, really it was here to stay. So, we should acknowledge that it is constitutionally protected, and simply work to lessen the number of slaves. Thank God, those who believed that slavery was a moral horror, a cancer on our country, and contrary to the higher values of a lawful republic, could never accept this capitulation.

Abortion is a grave injustice. We must do everything in our power to legally protect babies and to provide for the needs of mothers. While Reese believes that an end to abortion is impossible, we serve a God through whom all things are possible. May we never give in to the culture of death or lose faith in our efforts to build a culture of life in our world.

[Cardinal Timothy Dolan is the Roman Catholic archbishop of New York and chairman of the Committee on Pro-Life Activities for the U.S. Conference of Catholic Bishops.]