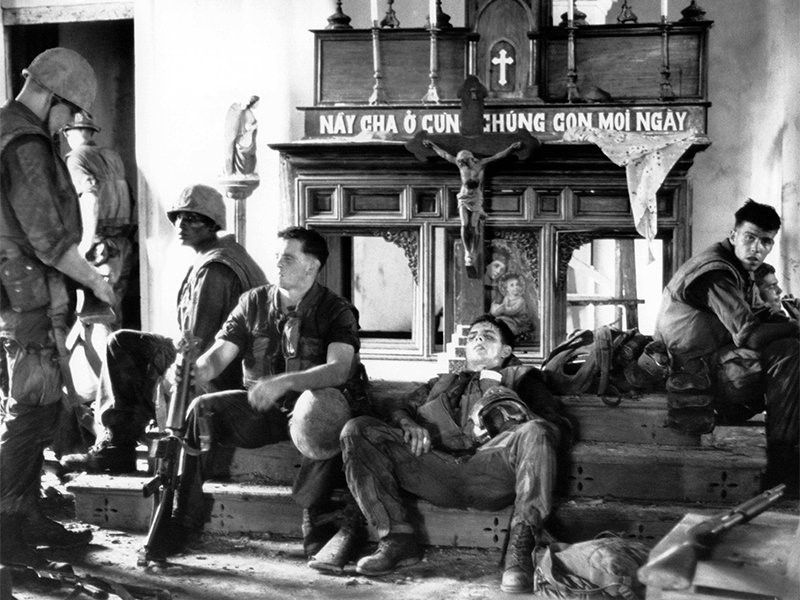 U.S. Marines, weary from battling North Vietnamese, rest at the altar of an abandoned Roman Catholic church south of Con Thien in South Vietnam on May 16, 1967. (AP)

When PBS’ documentary “The Vietnam War” first broadcast back in September, I did not want to watch it. I had lived through the war and did not have the stomach to revisit it in a 10-part, 18-hour film, even if it was by the award-winning documentarian Ken Burns and Lynn Novick*, who had done a similar series on the Civil War.

I finally got the courage to binge-watch the series on Good Friday and Holy Saturday. It seemed an appropriate time for mourning one of the great tragedies of my generation.

I was an early supporter of the war. I knew what communism had done in Russia, Eastern Europe and China. Communist leaders were ruthless in dealing with their political opponents and religious believers. I also believed the domino theory; if Vietnam fell, so would the rest of Southeast Asia. They needed to be stopped. If they were not, there would be a bloodbath in Vietnam, with Catholics on the chopping block.

Despite my interest in politics while in high school, I was not all that well-informed. My source of news was U.S. News and World Report, a weekly magazine with a conservative bent. Once I entered the Jesuit novitiate in 1962, I was cut off from all news because at that time religious formation involved removing a novice from the “world” so that he could focus on spiritual things.

After a four-year news blackout, I arrived at St. Louis University in the summer of 1966, when all hell was breaking loose in both the world and the church. Over the next two years, I watched English enter the liturgy, the escalation of the Vietnam War, the civil rights movement, the assassinations of Martin Luther King Jr. and Robert Kennedy, the Chicago convention riots and the election of Richard Nixon, the sexual revolution, Humanae Vitae and more.

Shortly after arriving in St. Louis, I remember looking at the front page of the Post-Dispatch and thinking, “I am going to ignore stories about Vietnam because by the time I am teaching, it will be ancient history.” I was taking 21 hours a semester and couldn’t do everything.

Looking back, I feel guilty for being so stupid and burying myself in books rather than being part of the historic events of my time. I felt it was better to stay focused on getting through my studies as quickly as possible so I could get to work.

But there was something else holding me back. I was frankly confused. I did not know what side I should be on in the debate about the war. I worried about Catholics in Vietnam, and I thought our military and political leaders must know what they were doing.

Ultimately, like other Americans, I turned against the war but shamefully late in the game. The turning point was reading “Vietnam: A Dragon Embattled” by Joseph Buttinger, an account of the French Indochina war. It became clear to me that we were making all the same mistakes the French did. It was clear that our military leaders did not know what they were doing.

But what makes me angrier is that our political leaders were lying to us. This is clearly documented by the PBS documentary. We hear actual recordings of John F. Kennedy, Lyndon B. Johnson and Nixon secretly expressing their doubts about the war while publicly saying that we were winning and that with just a few thousand more troops victory would be ours. Meanwhile, the outcome of American elections would determine how many more lives would be lost.

When we finally did pull out, the predicted bloodbath did not take place. The communists curtailed religious freedom and human rights, but their goal was political control, not the suppression of religion. When I visited Vietnam as a member of the U.S. Commission on International Religious Freedom, I found Catholic churches full but restricted in their freedom. One government official with whom we met pointed to a Catholic on his staff and bragged that his son went to Loyola University Chicago.

Rather than being part of an international conspiracy with China and Russia against the United States, the Vietnamese see America as a trading partner and a vital ally in their conflicts with China. The domino theory proved false.

Because of Vietnam, many of my generation will never trust our government or military leaders again, and rightly so. Former President George W. Bush took us into another disastrous war in Iraq based on false intelligence. I confess that I hesitated to condemn his war when I was editor of America magazine. What if there really were weapons of mass destruction in Iraq? But thankfully my colleagues were unanimous against it and so was then-Pope John Paul II. I figured, if I was going to be wrong, I would rather be wrong with the pope. He was not wrong.

Former President Barack Obama gave us great hope, but even Obama escalated the failed war in Afghanistan and threw Libya into chaos by overthrowing Moammar Gadhafi without having a credible leader to replace him.

Watching “The Vietnam War” is enough to make you weep, not just for the tragedy that was the war but also for our nation that continues making the same mistakes. The United States has not won a war since 1945, the year I was born, yet we still believe our politicians when they say there is a military solution to a foreign policy crisis. And we believe our military leaders when they say they can win a war if we only give them more time and money and troops. We continue to worry about losing credibility if we withdraw.

No president wants to admit that we have wasted lives and treasure in Iraq and Afghanistan to no purpose. Nixon got us out of Vietnam by lying to us, by telling us that the South Vietnamese were ready to defend themselves. Eventually another president, perhaps Donald Trump, will have to do the same in the Middle East. Meanwhile, we continue to muddle along.

Why are we incapable as a nation of learning from our history and our mistakes?

*This article has been updated to add that Lynn Novick was the co-creator of the "The Vietnam War."

After 50 years, draft board protesters insist what they did was right