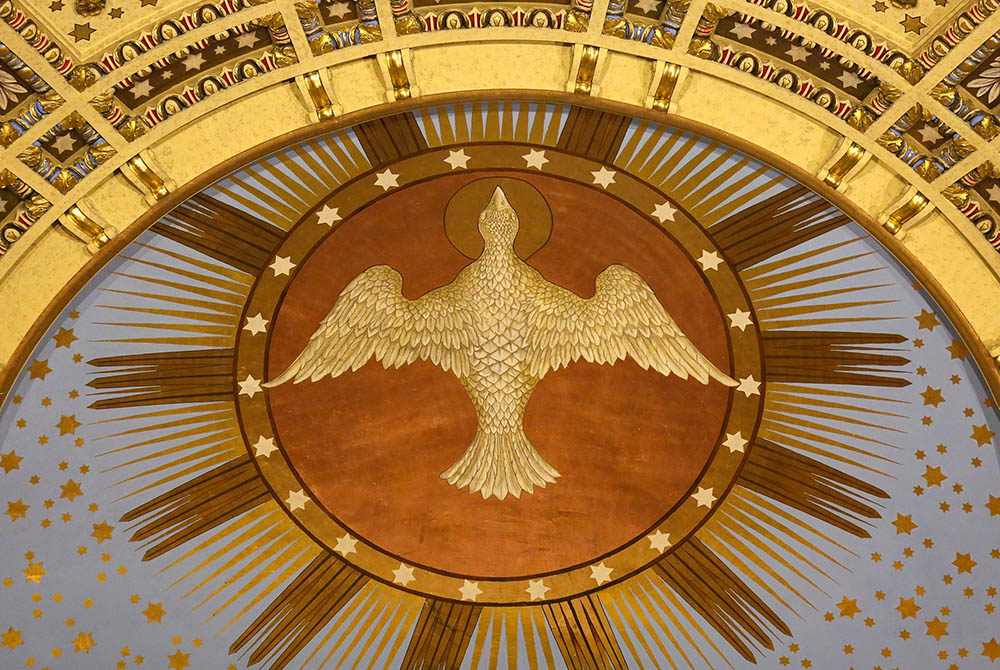 A likeness of the Holy Spirit is seen at the Cathedral of St. Paul in St. Paul, Minnesota. Pentecost invites us to celebrate the birthday of the church and meditate upon the Holy Spirit's role in our individual lives. (CNS/Dave Hrbacek, The Catholic Spirit)

I can be pretty cynical at times. Perhaps it comes with being on the senior side of life. I have lived through a lot of dark stuff including assassinations, clergy sexual abuse cover-ups, financial corruption in the Vatican as well as on Wall Street, the wholesale closing of vital parishes rather than opening ordination, Richard Nixon's Watergate, not to mention assorted vicious wars from Vietnam, Afghanistan, Iraq, and now the tragic bombings and violence in Palestine and Israel.

And that's not even getting to systematized violence against Black and brown people (from the police and otherwise), the COVID-19 pandemic, income inequality, Donald Trump's chronic lies, the Capitol insurrection, and the venality of a certain political party hell-bent on removing any truth-telling politician that challenges the big lie that the 2020 election was stolen.

Constant exposure to a 24/7 news media that loves to hype conflict and division doesn't help. Occasionally I even reflect that I won't be too sad when it's my time to die because this earth is so screwed up. Yikes.

Yes, I can be pretty cynical at times.

If indulged long enough, my cynicism can lead to an even worse mental state called acedia. Once listed among the deadly sins, acedia derives from a Greek word meaning indifference or lack of care. It has been described as "a state of spiritual listlessness" or "torpor." Thomas Aquinas identified acedia with "the sorrow of the world" that "worketh death."

This pretty much fits my experience. One of my biggest temptations is that the world and the institutional church are so hopelessly screwed up, it is pointless to even care. This fits with another of Aquinas' trenchant observations about acedia as a "sluggishness" of the mind and will "which neglects to begin good" (Summa Theologica, Question 35).

Uh, yeah, been there.

Benedictine oblate and author Kathleen Norris once wrote a whole book — Acedia and Me — about her 20-year struggle with this affliction. She explains the difference between acedia and depression: "While depression is an illness treatable by counseling and medication, acedia is a vice that is best countered by spiritual practice and the discipline of prayer."

This is where our Advocate-Spirit comes in.

I love the lectionary readings leading up to Pentecost. Last week (as I was busily denying feeling cynical), I read this passage: "When the Advocate comes whom I will send you from the Father, the Spirit of Truth who proceeds from the Father, will testify to me. And you also will testify" (John 15: 26). And again, "But I tell you the truth, it is better for you that I go. For if I do not go, the Advocate will not come to you. But if I go, I will send [her] to you. And when [s/he] comes [s/he] will convict the world in regard to sin and righteousness … because the ruler of this world has been condemned" (John 16: 7-8,11).

The Advocate. The Holy Spirit is our Advocate.

Perhaps because I am deep into writing a book about Sr. Kate Kuenstler — the pioneering canonical advocate for the laity — the meaning of this title for the Holy Spirit hit me in a new and different way. The word advocate is associated with the Latin advocatus and the Greek parakletos (paraclete). According to biblical scholar Jesuit Fr. John L. McKenzie, both can connote "one called to the side of one needing assistance, particularly legal assistance."

Our world and our church are mired in so many great evils that in the courtroom of cosmic justice we can hardly avoid condemnation. We desperately need the assistance of an Advocate-Spirit.

As I ponder what it means that Jesus sends an Advocate to this benighted planet, I slowly recognize the sinister, slimy nature of acedia. Acedia says the world and our church are beyond the power of God to save. Acedia says forget about finding goodness. You are wasting your time. Acedia denies the truth that God will never give up on us no matter how venal, selfish, violent, greedy and cynical we have become. In the courtroom of cosmic justice, the Advocate-Spirit defends our poor guilty humanity and shows us the way to a new, forgiven and powerful life in Christ. Then the same Advocate-Spirit helps us turn away from cynicism and toward that power and grace through which we bring Christ's healing justice to a suffering world.

No wonder acedia was once called a "noonday devil." When Norris told an Anglican nun she was writing a book about acedia, the nun replied, "That's like taking on the devil himself."

Personified evil would like nothing better than to paralyze those whose essential orientation is to love God and work for the good.

If God does not give up on this messy human enterprise, then neither must we.

To avoid feeding my cynicism-prone self, I resolve to fast from too much exposure to the always-click-hungry news media. I will also remember that every time I see a discouraging news story, there is more to the story. There is also a story of hidden grace always at work but usually beyond our knowing. Last, since I am still here on this broken earth, it must be because God wants me here. For as long as I am given, I will witness and work that God's great love will prevail on earth as it is in heaven.

This Pentecost we must renew our trust in the truth to which Jesus' Advocate-Spirit testifies: "The ruler of this world has been condemned."