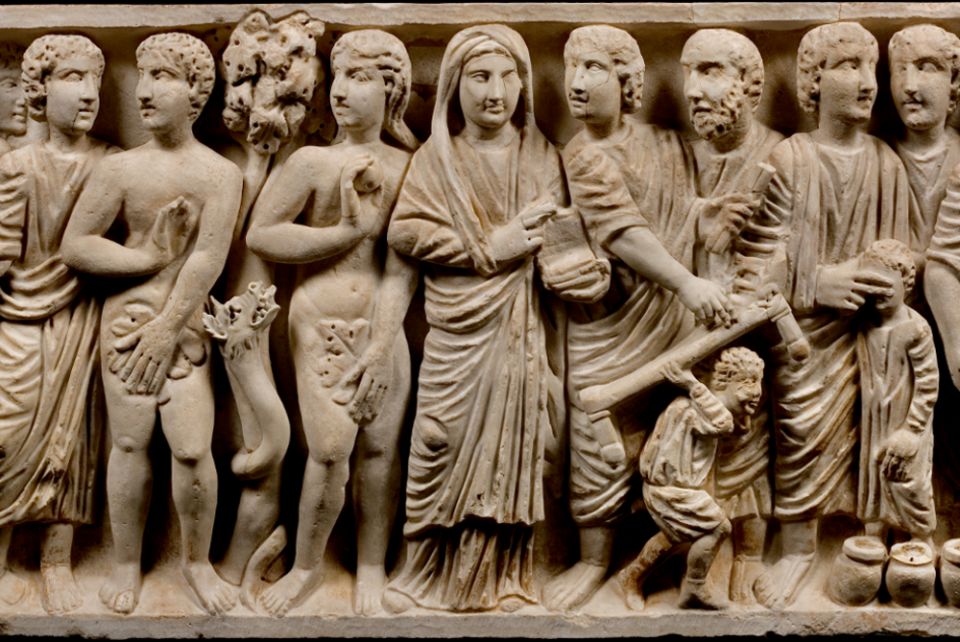 I just returned from a terrific 10-day pilgrimage to Rome and Naples, viewing funerary frescos and sarcophagus friezes of faith-filled fourth-century Christian women.

Some pretty amazing, 21st century women and men joined me in cherishing these oft-hidden women whose tomb motifs depict them in authoritative ecclesial postures, teaching and preaching the good news of Jesus Christ.

Since most of history (not only Christian history) was written by men, about the concerns of men, the history of early Christian women is barely discernible.

Important exceptions are first-century Christian texts, where we discover that women exercised significant leadership roles in the earliest churches.

Yet after the first century, Christian writings grow silent, mentioning women mainly in a context of prescribing (or more often proscribing) what they may or may not do. The public witness of Christian women was unsettling (not to say challenging) to mainstream Greco-Roman culture.

In succeeding centuries, official church documents justified curtailing female authority by repeatedly citing 1 Timothy's admonishment forbidding women to teach or have authority over men and requiring them to be silent in the assembly (1 Timothy 2:12).

It is nothing short of amazing then, to view Christian funerary art from the late third until the early fifth centuries depicting women teaching and preaching the good news despite being told they should do neither.

The Rome segment of our pilgrimage included a visit to the Pio Cristiano Museum, one of the Vatican Museums, which contains many sarcophagus friezes of deceased women in shown in authoritative postures. That is, they hold scrolls or codices with hands in a speech gesture, surrounded by biblical stories, preaching, or teaching about stories from the scriptures and Jesus' life, death and resurrection.

I first viewed these tombs in 2006 and was deeply moved by the thought that Christian women wanted their faith and ecclesial leadership to be remembered at a time when male leaders were silencing them.

Umberto Utro and Rosanna DiPinto of the Pio Cristiano Museum greeted our pilgrim band. They had kindly supported my research into iconic authoritative motifs on Christian portrait tombs. Utro's warm praise of my recent book, Crispina and Her Sisters: Women and Authority in Early Christianity, was especially meaningful, coming as it did from an expert in the field.

Another was that over twice as many individual female portraits had in-facing "apostle" iconography (often Peter and Paul) compared to male portraits, suggesting that women used this motif to validate their authority. Who better to affirm their ministry within their Christian communities than the heroic leaders of the Roman church?

Both findings concur with theories from literary scholars, such as Sacred Heart Sr. Carolyn Osiek and Peter Lampe, that women were far more influential in the spread of early Christianity than commonly recognized.

But the most meaningful part of the Pio Cristiano visit was that I had yet another opportunity to reflect on what these deceased ecclesial women might have to say to me — indeed to each of us — about life and death and resurrection.

It was a great preparation for Holy Week.

Please join me and take a moment to meditate on one deceased woman's sarcophagus — we'll call her Junia — and consider what she may have wished share with us from beyond the grave. 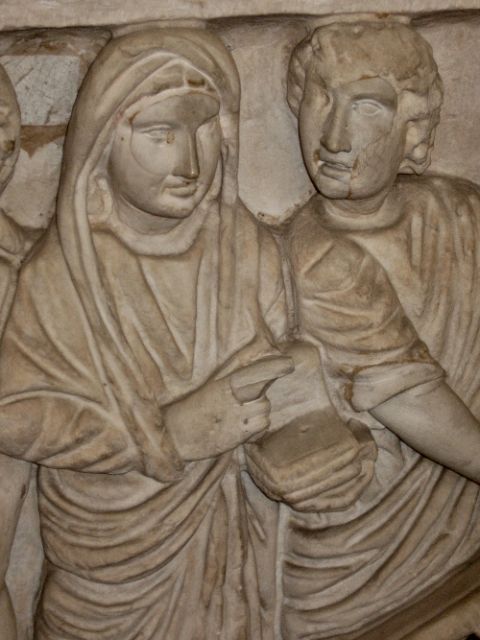 Detail of deceased woman with codex and speech gesture while Christ leans in as if to speak to her. The deceased and/or her family memorialized her as one who ministered with the authority of Christ. (NCR photo/Christine Schenk)

Junia is shown with a codex and is making a speech gesture and surrounded by biblical figures. On the viewer's left, God the Father speaks with Cain and Abel followed by Christ shown with Adam and Eve. On the right, we find the healing of the paralytic, the healing of the man born blind, the miracle at Cana, and the raising of Lazarus.

In the last vignette, Lazarus' sister Mary is shown upright at Jesus' feet, with her face looking outward rather than prone as it more commonly appears in Lazarus reliefs. This may be an embedded portrait of Junia herself.

Ancient funerary art is performative in nature and is meant to draw the viewer in as a participant. As her loved ones mourned her, Junia wished them to enter into a liminal space and experience Christ's power over death. He is depicted as reversing the effects of the fall from paradise by healing the blind and lame, providing an abundance of wine in the new reign of God, and raising Lazarus (and Junia) from the dead.

Junia's mourners commune not only with the departed Junia, but also with Christ who heals and raises up through the meaning evoked and "performed" by the art on her sarcophagus.

She exhorts the living to embrace the Christ who authorized her ministry and to whom she witnesses from beyond the grave.

And what of us?

This week of death and resurrection is a good time to reflect on what our own lives are all about.

Where do we stand on behalf of the values of Jesus in challenging our own 21st-century culture?

What would we want our funerary fresco or sarcophagus relief to say about us?

What shall we do with our one wild and precious life?

A version of this story appeared in the June 28-July 11, 2019 print issue under the headline: Foremothers minister from beyond the grave .

Column | Church's foremothers proclaim Jesus from beyond the grave