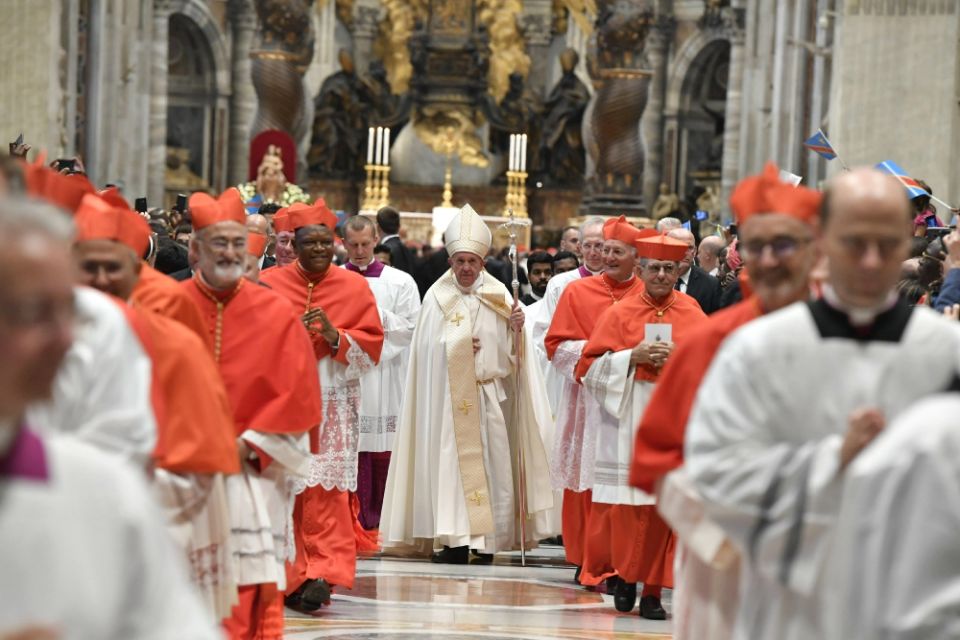 Pope Francis walks in procession with new cardinals during the consistory in St. Peter's Basilica at the Vatican Oct. 5. (CNS/Vatican Media)

On Nov. 7, I attended a thought-provoking presentation by veteran Vatican journalist Robert Mickens, who spoke in Cleveland on the topic of "The Francis Reforms: Too Little, Too Late?" at FutureChurch's annual event.

I first met Mickens when he telephoned prior to the 2008 Synod of Bishops on the Word of God. I enjoyed reading his "Letter from Rome" column in the British journal The Tablet and envisioned a proper English journalist. So, I was surprised to hear a decidedly Midwestern accent on the other end of my cellphone. My "proper Brit" journalist actually hailed from Toledo, Ohio, my home diocese.

Mickens has covered the Vatican for more than three decades. After studying theology at Rome's Pontifical Gregorian University, he accepted a position as a journalist and producer at Vatican Radio, where he served for 11 years, before becoming The Tablet's Rome correspondent. Currently an editor at LaCroix International, his famed "Letter from Rome" continues to enlighten and to educate.

An unabashed Pope Francis fan, Mickens is a well-positioned insider and shrewd interpreter of Vatican politics. He suggested Francis' decision to live at Casa Santa Marta was one of the most important reforms of his papacy. It allowed him to avoid being controlled by churchmen who wished to preserve Pope Benedict XVI's legacy, which, for Mickens, constituted "the last breath, the last gasp of upholding this unseen regime, Eurocentric Catholicism." 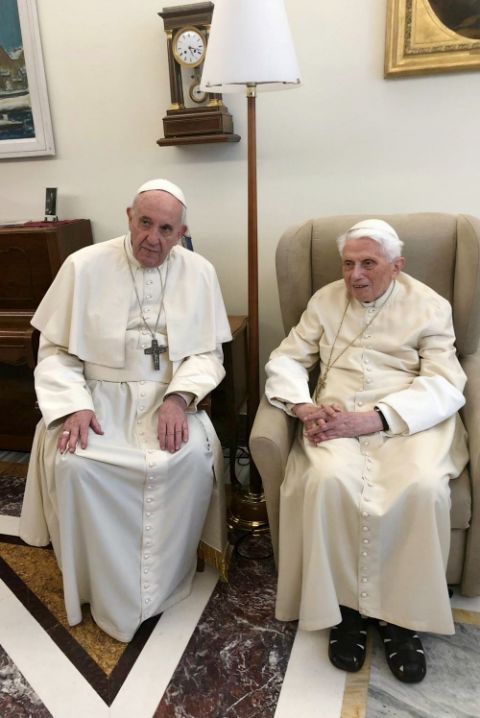 Well before announcing his resignation, Benedict made two important appointments. He chose then-Bishop Gerhard Müller — the editor of the complete works of Joseph Ratzinger — to succeed Cardinal William Levada at the Congregation for the Doctrine of the Faith, even though Levada was just 76 and could easily have served until the new pope named a successor.

Benedict also appointed his personal secretary — Msgr. Georg Gänswein — as archbishop and head of the papal household. In this position, Gänswein would oversee the new pope's appointment calendar even as he continued serving as Pope Emeritus Benedict's secretary. Mickens believes there was an expectation that "one of the Ratzinger disciples" would be elected pope, and Gänswein "would be the Robespierre going back and forth between the two."

Francis' decision to live at Casa Santa Marta was motivated not only by his expressed desire to live in community, but also to avoid being controlled by entrenched interests. Hence, in Mickens' opinion, the new arrangement was "certainly one of the most important reforms [Francis] has undertaken."

Even though his powerful predecessor lived next door, Francis began to reform the papacy and the universal church. "A lesser man could not have done that without criticizing Benedict," noted Mickens, who said Francis "has been brilliant in including the people that he inherited, the Roman Curia."

Yet Francis has "shaken the foundations of the Roman Curia ... because he does not follow the Eurocentric protocols. ... He is more concerned about 'what would Jesus do' than what does canon law say."

Francis' reforms rely on what Mickens dubs an "attitude adjustment," seen in his inaugural encyclical, Evangelii Gaudium, in which Francis expresses his desire for a church that welcomes, rather than judges people:

I dream of a "missionary option", that is, a missionary impulse capable of transforming everything, so that the Church's customs, ways of doing things, times and schedules, language and structures can be suitably channeled for the evangelization of today's world rather than for her self-preservation.

Francis eschews titles, preferring to call himself "father" rather than "your holiness." From the opening moments of his papacy, he made clear that in the church of Rome, bishop and people are together in taking up a "journey of fraternity, of love, of trust among us."

Mickens repeatedly asked the Cleveland gathering of progressive Catholics to have patience with the slow pace of reform. He observed that Francis has opened up processes for broader participation and pointed to the unprecedented widespread grassroots input that shaped the recent synod for the Amazon.

Three "modest" synod proposals that Mickens believes will be taken seriously by the pope include ordaining married deacons; a studied consideration of women deacons; and, "perhaps the most significant," the elaboration of an Amazonian liturgical rite. In the words of the proposal, that rite would express "the liturgical, theological, disciplinary and spiritual patrimony of the Amazon," similar to rites of the Eastern Catholic churches.

As for the future of Francis' reforms, Mickens suggests archconservative elements have resigned themselves to what is being called the "biological solution," or awaiting the pope's death. Yet Francis has named 53% of the 124 electors in the College of Cardinals. While acknowledging that not all new electors agree with the pope, Mickens observes that many current cardinals continue to support him.

Francis has also appointed more cardinals from the Global South, although Europe, the U.S., Canada and Australia still make up 53% of electors, a percentage markedly lower than in the past, however.

For Mickens, as well as other analysts, the biggest Francis reform is the shift from a Eurocentric church to a universal church: "Pope Francis talks about unity in plurality. We can worship God in different ways, according to our different cultures. ... We don't all have to be Latins or Greeks. We don't all have to filter the Gospel through Plato or Aristotle as we have done in the West," Mickens said.

This "watershed moment" requires support from progressive and other Catholics, whom he begs "to push and support the pope," even if they are disappointed by slow movement on certain issues, such as women deacons.

"We trust in the working of the Holy Spirit," Mickens said in closing before asking those present to "be very generous" in answering the request Francis makes every time he speaks to people: "Don't forget to pray for me."