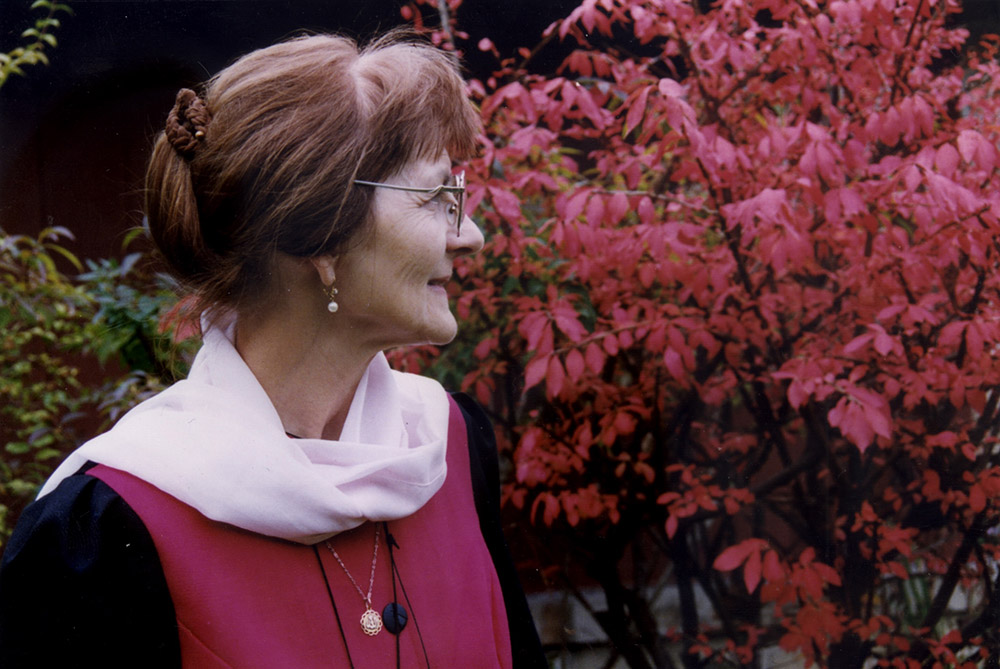 Just hours after Pope Francis addressed Catholics in Slovakia, more than 420 Catholics from all over the world gathered in an online event to celebrate Ludmila Javorova, the first publicly known woman priest ordained in the modern era. In 1970, Bishop Felix Maria Davidek ordained her to serve the underground church in Czechoslovakia, where communist leaders were killing and imprisoning priests, nuns and lay leaders.

Javorova's biographer, Medical Mission Sr. Miriam Therese Winter, spoke to an appreciative international crowd brought together through the wonders of cyberspace by FutureChurch and the Women's Ordination Conference.

Winter's four trips to the Czech Republic over a three-year period yielded multiple oral interviews and a deep friendship between the two women. In her award-winning 2001 book Out of the Depths, Winter chronicled Javorova's courageous spiritual odyssey and Davidek's far-seeing ecclesial vision. (Except where indicated, details about Javorova's story in this column are taken from Winter's book.)

Francis' words at the Sept. 14 Slovakia Mass seem particularly apropos to these two leaders of the Czech underground church: "Witnesses generate other witnesses, because they are givers of life," the pope said. "That is how the faith is spread: not with worldly power but with the wisdom of the cross; not with structures but with witness."

Davidek and Javorova would suffer, witness and bring to life a new model of church community for the persecuted people of God in Czechoslovakia. Through a series of Spirit-led happenings, their witness continues to bring life to Catholics today. (The remarkable story of how Winter and enterprising U.S. women reformers uncovered Javorova's courageous but hidden ministry is wonderfully told in this 2001 article by NCR's Arthur Jones.)

Fr. Felix Davidek spent more than 14 harrowing years in a Czech prison where he and his brother priests surreptitiously celebrated Mass using bread and fermented raisin juice (raisins were brought in by family members). But he was anguished when he saw the many imprisoned women and women religious who had no access to the sacraments in a time of great spiritual need.

A seed was planted in Davidek's priestly soul that would one day yield a rich harvest.

After his release, Davidek sought out Javorova — a trusted family friend with prodigious organizational skills — and the two worked to create the clandestine Koinotes community. At first, Koinotes functioned as a kind of university to recruit and educate male seminarians who would be ordained to serve underground Catholics.

With the knowledge of Pope Paul VI, Czech scientist Jan Blaha was consecrated as a bishop for the beleaguered underground church. Blaha then secretly consecrated Davidek to serve as bishop of Koinotes and its offshoots.

Javorova worked tirelessly — and at no small risk to herself — in every aspect of Koinotes' functioning. Davidek went on to consecrate 17 bishops and ordain approximately 68 priests. He also appointed Javorova to serve as his vicar general. In this capacity, she attended every ordination.

As Winter explained to the Sept. 14 gathering:

And the rules were, they could write nothing down. Even the names — she had to memorize them. At the end, she had witnessed to over 545 ordinations ... and the rules were if you were ordained, you could not tell anyone, not even your wife, your mother, your father, no one.

Koinotes quickly grew to include scores of hidden communities throughout Czechoslovakia. Along with Davidek and Blaha, Javorova knew the identities of all the priest and lay leaders of the burgeoning underground church.

Davidek's vision of church arose from the Second Vatican Council. In Out of the Depths, Javorova recalled his description of church: "We are people of God. We are church in the midst of God's world, channels of grace in every situation, and when necessary, agents of the change that is inherent in the Gospels." 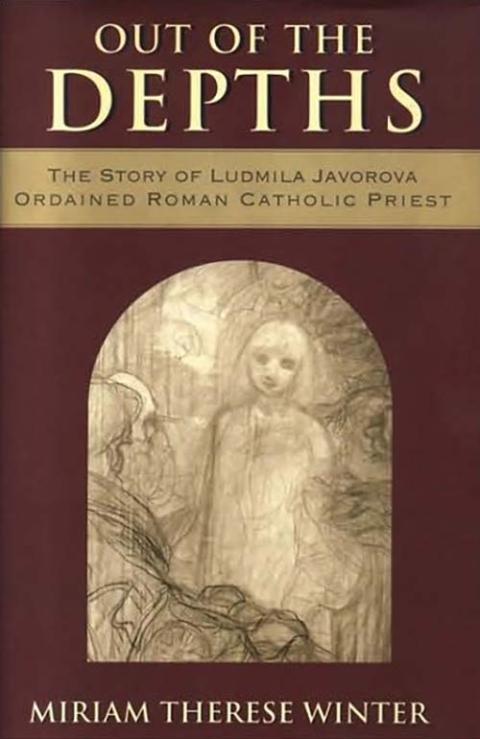 Cover of "Out of the Depths: The Story of Ludmila Javorova, Ordained Roman Catholic Priest" by Medical Mission Sr. Miriam Therese Winter

Reading Out of the Depths, one senses that Davidek was a bishop after Francis' own heart. And if our pope ever took time away to read about the incredible depth of Javorova's spirituality, she would win him over as well.

In September 1970, Davidek announced his intent to convene a "Council of the People of God" that would include women and men, lay and clerical representatives from the Czech communities and all the other areas in which Koinotes had communities in Slovakia, Moravia, Romania and Bohemia. Everyone had to abide by strict secrecy rules.

He proposed discussing (among other things) the changing roles of women in culture and society and the New Testament and canonical implications for ordaining women. The plan was approved by Koinotes leaders — including other bishops — and, with Javorova's organizational and administrative help, a comprehensive preparatory process began.

On Dec. 25-26, Koinotes representatives met in a secret council to discuss the possibility of ordaining women. Several bishops immediately tried to derail the proceedings, objecting to discussing women's ordination, even though they had previously approved it for the planned agenda.

After hours of heated argument, a vote was taken. The council split evenly on the issue. Both Davidek and Javorova were blindsided by the evident duplicity of some attendees and the intensity of their opposition. Davidek realized that as things stood, he would not be able to publicly ordain women anytime soon. He decided to ask Javorova if she would accept a secret ordination.

In Out of the Depths, Winter quotes her reaction:

It was so unexpected. I did not anticipate being ordained. I accepted it as God's gift. God gives gifts for no reason at all, so I will never find an answer to the question, "Why me?" although I have asked many times. ... How can a human being who is so small and so limited give a gift back to God? ... God will do whatever God wishes whenever God wants to do it, and it will be when we least expect it.

At 10 p.m. on Dec. 28, using the Rite of Ordination according to the Roman Pontifical, and with Davidek's brother Leo as a witness, Javorova was ordained first a deacon and then a priest in the Roman Catholic Church.

Following her ordination, Winter writes, "Ludmila celebrated her first Mass — simply, quietly, together with Felix and Leo Davidek, Mary the Mother of Jesus, and all the angels and saints of God."

For the rest of her life, Javorova would be obliged to exercise her priestly ministry in secret. Even so, she ministered to many people who inexplicably "came from nowhere" to pour out their hearts and receive a consoling word about God's great love for them.

"So she did a priestly ministry with no credit, no recognition," said Winter. "And some of the suffering that she suffered physically, psychically was very, very deep and painful." 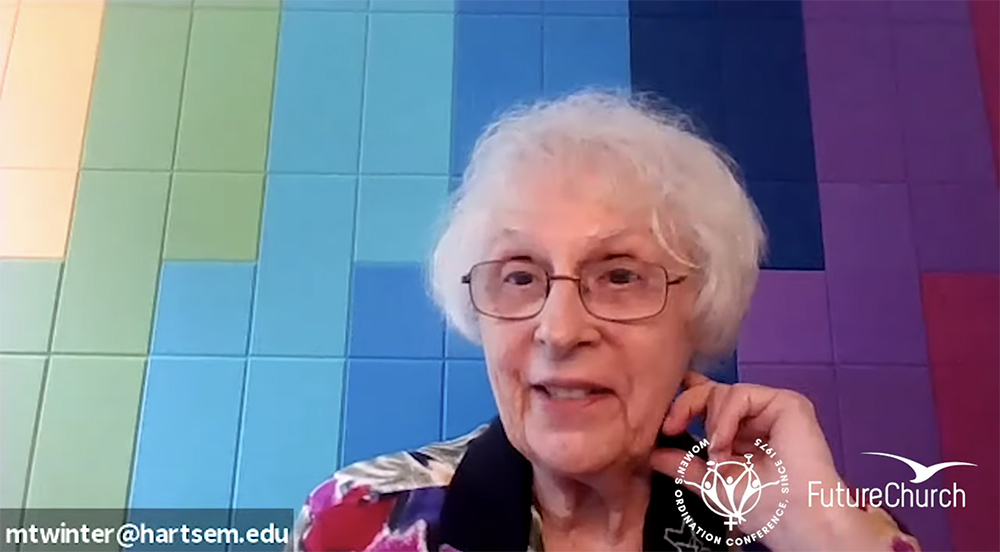 After the breakup of the Soviet Union, the Vatican sought to regularize the underground ordinations — including those of married men who had been given bi-ritual rights to administer sacraments in both the Roman and Byzantine traditions. Priests who had been Javorova's friends now distanced themselves, especially after Pope John Paul II's Ordinatio Sacerdotalis sought to shut down all discussion of women's ordination.

The Vatican banned Koinotes married priests in the Czech Roman rite, permitting them to minister only in Byzantine communities. In 1996, Rome explicitly prohibited Javorova from exercising any priestly ministry whatsoever and instructed her to tell no one about the prohibition.

But as the saying goes, "Well-behaved women rarely make history."

In her Sept. 14 introduction, the director of the Women's Ordination Conference, Kate McElwee, assured us that Javorova's contribution to history will never be lost: "We know the danger of women's witnesses, leadership and ministry being erased. And we will not let that happen. Her living witness, a woman priest of our time, forever changed the women's ordination movement."

Winter's presentation further suggested that Javorova's work with the Koinotes community reveals something about the birthing pains so plainly evident in the church today:

[Koinotes] was like an organism that connected everything to everything. And it was alive. I am dying to yesterday. I am entering today. And then tomorrow. That's how a new tradition gets born. What happens in our spiritual life is also true with our everyday life. The fact that life can change. I leave certain things behind, and I start something new that is needed. So while we stick to tradition at the same time, there has to be a new tradition being formed as well in the church.

As for the now 89-years-young Javorova, Winter captured well the power that anchors her priesthood: "[Ludmila] said, 'The work of the Holy Spirit means you are left with something you have to do. And you will know that you have to do it.' "

In a column titled "Simply Spirit," it is only fair to give the last word to Javorova herself. In her biography's acknowledgements, she issued a mighty challenge to today's Catholic Church:

"The book outlines the fact that the charism of priesthood for women does exist. It also introduces the question of whether the Spirit of God in ministerial service is being systematically extinguished through juridical decision-making."