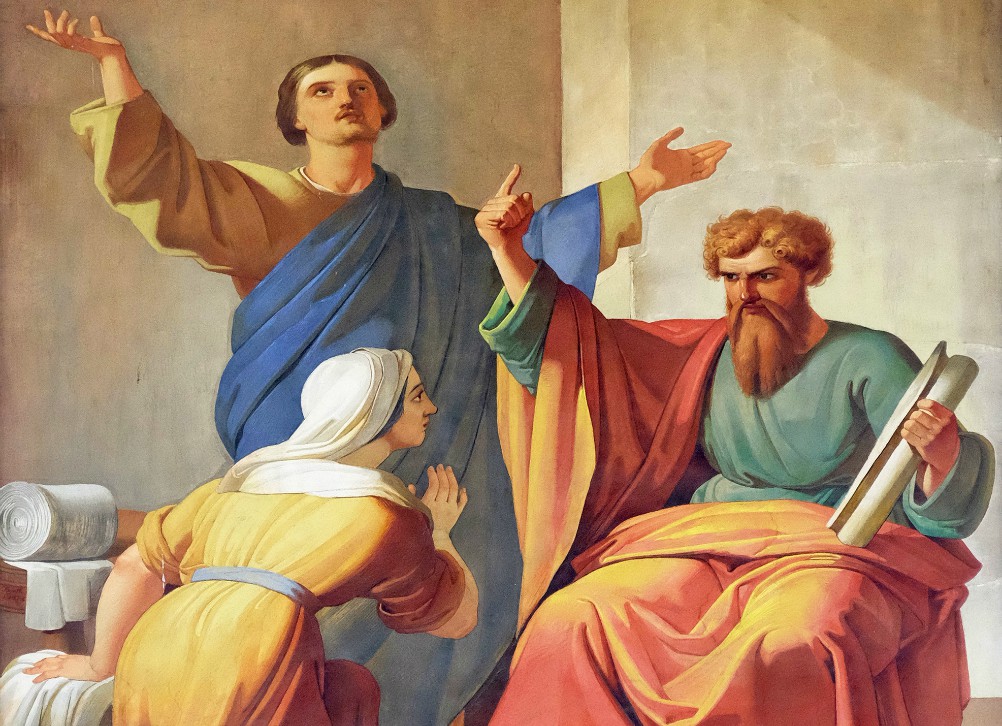 St. Paul at the home of Aquila and Prisca, depicted in a fresco at the Basilica of St. Paul Outside the Walls in Rome (Dreamstime/Zatletic)

I am frustrated by the Vatican's recent instruction on "The pastoral conversion of the parish community in the service of the evangelizing mission of the church," issued on July 20.

At first, the document evokes an expansive vision of parish transformation by citing Pope Francis' call for "creativity" in "seeking how best to proclaim the Gospel" and that "the Church, and also the Code of Canon Law, gives us innumerable possibilities, much freedom to seek these things."

Then the instruction tantalizes reform-minded Catholics by saying, "Parish communities will find herein a call to go out of themselves, offering instruments of reform, even structural, in a spirit of communion and collaboration … for the proclamation of the Gospel."

But I find no structural instruments of reform here.

With one notable exception, the instruction is essentially "all hat and no cattle" as my Texas friends like to say.

The Congregation for the Clergy's instruction restates (somewhat defensively) long-standing church rules that mandate a male-celibate-priest-centric and priest-controlled vision of parish community.

This vision is already moribund in both the global north and the global south because — news flash — there are too few priests to serve the world's expanding Catholic population.

In Germany, the instruction was interpreted as an effort to stop moves by German bishops to encourage both priest and lay leadership in consolidating parishes and providing pastoral care. One German canon lawyer succinctly said the instruction "answers today's questions with yesterday's answers."

In a pastoral letter to his Magdeburg Diocese, German Bishop Gerhard Feige wrote, "I won't let myself be paralyzed and blocked by their restrictive orders, since much in it is quite unrealistic — especially with regard to our extreme diaspora situation, which they evidently cannot imagine — and since no positive solutions are indicated in view of the mounting lack of priests."

Feige also fears Rome's instruction will turn lay Catholics away from working for the church at all.

His concern was echoed by German Cardinal Walter Kasper, who, while defending the instruction, also said it would have benefited from "more positive, encouraging and appreciative language" about lay leadership. Kasper tactfully suggested the world's bishops' conferences should have been consulted before the document was issued.

The prefect of the Congregation for the Clergy, Cardinal Beniamino Stella, has invited German bishops to Rome to discuss the issues. I hope our German brothers can get through to presumably well-intentioned Vatican officials who seem to have little understanding of the realities of parish life in a time of fewer priests.

A caveat — there is one big positive in this document: It gives laypeople significantly more leverage in canonical appeals to preserve their parish communities.

For 14 years, I have worked closely with FutureChurch's Save Our Parish Community initiative to support countless ordinary Catholics accessing their canonical right to appeal the closure (and eventual sale) of their vital, solvent parishes and churches.

Too many bishops were (and are to this day) treating parish communities like Starbucks franchises, rather than the body of Christ that they are called to shepherd — not to sell.

When the project began, there were no canonical guidelines for this important work. But the late Sr. Kate Kuenstler was a gifted canon lawyer whose religious community — the Poor Handmaids of Jesus Christ — supported her work on behalf of the canonical rights and responsibilities of laypeople. Sister Kate worked with hundreds of parishioners until her untimely death last October.

Her pioneering canonical expertise helped develop the new jurisprudence in canon law which is now reflected in the instruction.

In the process, Catholics began to win their appeals and to counter misguided diocesan decisions that scattered their parish communities with the goal of closing and selling their churches, in many cases to shore up diocesan finances.

An important operating principle for the Save Our Parish Community initiative was (and is) the belief that destroying parish communities is not the way to solve the male-celibate-priest crisis.

The new Vatican instruction seems to agree, insofar as it specifically says a bishop should not merge a parish or sell a church because of "the lack of clergy, demographic decline or the grave financial state of the diocese."

Yet "the lack of clergy [and] demographic decline" are the exact reasons given by most — if not all — U.S. bishops seeking to consolidate parishes.

Detailed canonical procedures for merging a parish and closing and selling the church were first issued in 2013 when the Congregation for the Clergy issued procedural guidelines for the modification of parishes. These pointed to the need for two separate canonical decrees, one for suppressing and merging a parish and another for closing its church in preparation for sale.

The 2013 procedures said a bishop should not close and sell a church because of "the lack of clergy, demographic decline or the grave financial state of the diocese." It did not apply these same criteria to parish suppressions and mergers. But the new 2020 instruction says these criteria now apply to parish mergers as well.

Are bishops being held to a stricter standard before they can merge parish communities?

Yet these rather esoteric canonical distinctions may amount to little more than "rearranging the deck chairs on the Titanic," as a retired seminary rector once opined when I asked his views on Vatican efforts to address the priest shortage.

We do know at least one promising solution to the priest shortage: We could open ordination rather than close parishes!

The church's hierarchy has yet to agree, although the people of God in Latin America, as well as in the United States, support both married and women priests in significant numbers, according to a 2019 Pew Research article.

By far the most ironic and frustrating part of the July instruction is that it has the temerity to cite St. Paul's letters referring to house churches as "a foretaste of the birth of the first 'Parishes.' "

What the instruction conveniently fails to mention is that these house churches were founded by a married couple — Prisca and Aquila — whom Paul calls his "co-workers in Christ Jesus"  (Romans 16:3-5; 1 Corinthians 16:19-20). This couple founded house churches (aka proto-parishes) in Corinth, Ephesus and Rome. With Aquila, Prisca probably presided at early eucharistic celebrations held at their house church.

Equally ironic, given the instruction's dim view of giving laypeople titles such as "coordinator," "parish manager" or "chaplain," is the fact that the U.S. Conference of Catholic Bishops used this Pauline title in its groundbreaking 2005 document on lay ecclesial ministry, "Co-Workers in the Vineyard of the Lord."

So, I suggest using the title "co-worker" for laypeople who exercise parish leadership.