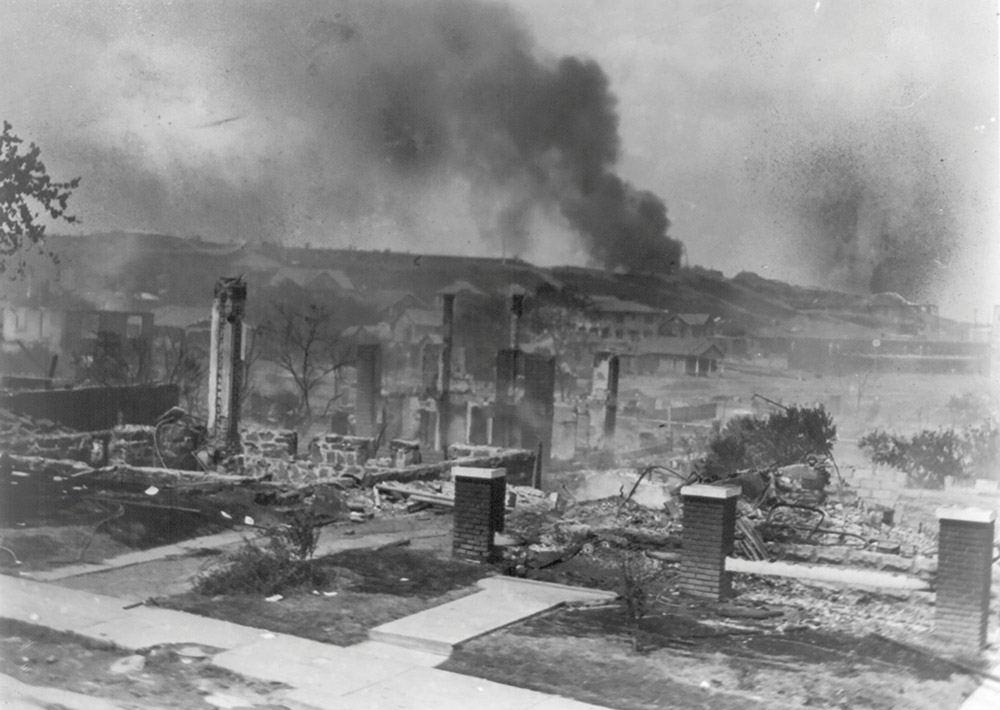 Smoke rises from the ruins of African Americans' homes following the 1921 race massacre in Tulsa, Oklahoma. (CNS/Library of Congress, Handout via Reuters/National Association for the Advancement of Colored People Records/Alvin C. Krupnick Co.)

Editor's note: The original version of this column drew upon, among other things, the research of historian Shannen Dee Williams and has been updated to add citations and links to her work. NCR apologizes for this initial omission.

President Joe Biden recently visited Tulsa, Oklahoma to commemorate the 100th anniversary of the May 31-June 1, 1921, massacre of an estimated 300 Black people at the hands of a white mob. After 24 hours of brutal mayhem, the white rioters departed leaving 35 charred city blocks in their wake. Black citizens and their businesses were destroyed, apparently for building "Black Wall Street," the lucrative Black financial district that brought security and wealth to its people. No government entity intervened to stop the violence, nor has anyone ever been prosecuted for the horrific massacre.

Like most white people, I had never heard of the Tulsa massacre. Nor had I ever heard of Juneteenth — the upcoming June 19 celebration of the end of slavery in the U.S. Turns out there is a lot of Black history — including Black Catholic history — that I have never heard about.

For example, I never learned that in 1452 Pope Nicholas V morally sanctioned the trans-Atlantic slave trade by issuing the papal bull Dum Diversas, which permitted the kings of Spain and Portugal to buy and sell Africans.

Today, our nation's violent legacy of chattel slavery is seen in the horrific murder of George Floyd, the ongoing senseless deaths of Black citizens at the hands of trigger-happy police, disproportionate Black incarcerations, inferior access to health care, and escalating Black income inequality. All testify to the soul-killing racism that is endemic to and, I would argue, in danger of destroying our society.

Yet the problem of racism — and its solutions — do not lie with Black people. They lie with those of us who are white. A year ago, in an article written for NCR, Fordham professor Fr. Bryan Massingale wrote, "If it were up to people of color, racism would have been resolved, over and done, a long time ago. The only reason for racism's persistence is that white people continue to benefit from it."

Racism and white supremacy are killing our Black and brown sisters and brothers. We white people — especially white Catholics — are being called to do something about it. But what must we do?

Well, I've been doing a lot of reading. Isabel Wilkerson's fine book Caste is helping me see that I was born and socialized into a hidden, heretofore-unnamed U.S. caste structure that became a cornerstone of the U.S. social, political and economic system.

Robin DiAngelo's book White Fragility is helping me recognize that while "most of us would not choose to be socialized into racism and white supremacy," we did not, in fact, have that choice. As a white person my psychosocial development is inevitably "inculcated in a culture in which I am in the superior group."

In other words, many of my culturally ingrained white behaviors consciously or unconsciously reinforce structures of white oppression in the racist caste system that is U.S. society. Gulp.

If we wish to heal a grievously wounded U.S. society that believes brown and Black people are of lesser value than white people, we whites must own that we are part of the problem. But what can white Catholics do? Learning about the painful history of violence against Black people — including Tulsa and the nearly 5,000 public lynchings that occurred between 1882 and 1968 — can sensitize us to the agonizing history of Black Americans and help us understand why Black folk have precious few reasons to trust a criminal justice system that is not only unjust but perceived as out to get them.

An excellent education/advocacy resource particularly useful for Catholic organizations — especially parishes and schools — is the Women Witnesses for Racial Justice initiative from FutureChurch. Well-researched historical essays, prayers and advocacy suggestions accompany regularly scheduled and recorded Zoom webinars. All are available for viewing and free download at the FutureChurch website.

The project was first conceived in 2017 when FutureChurch co-director Deb Rose-Milavec heard Massingale's keynote address at the Association of U.S. Catholic Priests conference. "Without apology he challenged all white Catholics, but especially white Catholic priests to use their pulpits and their pastoral authority to consistently speak out against the sin of racism," she remembers.

As she watched Massingale encourage the hundreds of priests and progressive Catholics in attendance to be courageous and confront racism wherever it is found, Rose-Milavec became convinced that "white Catholics have to lead the way to end white supremacy."

Rose-Milavec and FutureChurch's other co-director, Russ Petrus — who is a pastoral musician and gifted liturgist — designed the Women Witnesses for Racial Justice initiative to help white Catholics learn about Black Catholic history and begin the uncomfortable but critical conversations we need to have about racism in the church and in ourselves. (Full disclosure — I am the retired co-founder of FutureChurch.)

According to the FutureChurch website, the extraordinary journey of the nation's Black Catholic sisters and their foundational understanding that racism and exclusion have no place within the Catholic church provide a uniquely creative way for white people to learn about Black history.* Graced with beautiful art by Cleveland artist Chloe Becker, the initiative is especially designed to help Catholics — especially white Catholics — reflect, pray and act for racial justice. 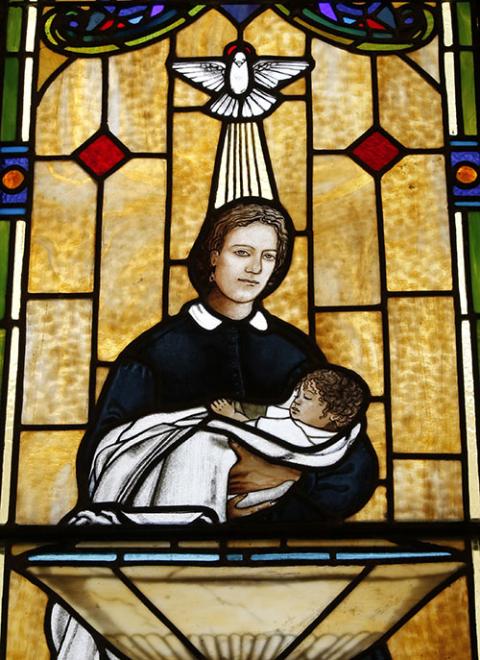 Venerable Henriette Delille, who founded the Sisters of the Holy Family in New Orleans in 1842, is depicted in a stained-glass window at St. Louis Cathedral in New Orleans. (CNS/Gregory A. Shemitz)

Franciscan Sr. Antona Ebo, Mother Mary Lange of the Oblate Sisters of Providence, Franciscan Sr. Thea Bowman and Venerable Henriette Delille of the Sisters of the Holy Family are among the project's 12 featured Black women — each targeted in different ways by white supremacists who viewed them and the institutions they founded as threats to the racial and sexual status quo.

On March 21, 1965, Ebo risked her life as the only Black nun to march with Dr. Martin Luther King in Selma, Alabama, just two weeks after Bloody Sunday.

After recognizing that poor Black children in Baltimore had no one to teach them, Elizabeth (Mother Mary) Lange founded the first religious order for Black Catholic women in the United States, the Oblate Sisters of Providence. In the face of repeated white redlining, by the 20th century, her Oblates had successfully opened schools for children of color in 16 states.

Bowman — the "sister of everybody" — inspired her listeners with the spiritual power of Black sacred songs evoking a God who "lifts up the lowly." At one of her last public appearances, at the 1989 summer meeting of the U.S. bishops' conference, she sang, "Sometimes I feel Like a Motherless Child" as a prophetic challenge to the question, "What does it mean to be Black and Catholic?" (She also convinced the bishops to dance for the first and probably last time in their history.)

In New Orleans, Delille founded the Sisters of the Holy Family, a community dedicated to serving slaves. Historian Onita Estes Hickes wrote that by recruiting her early followers "from among the quadroons slated for concubinage, Henriette made a bold frontal attack on the sexual prerogatives and privileges of white male society, transforming their sassy sirens into sacred sisters."

In her exhaustive research into the lives of Black Catholic sisters, historian Shannen Dee Williams has often reflected that “Black nuns pushed the Catholic Church to be truly Catholic” and to practice what it preaches.*

It is time for white Catholics to follow in their footsteps.

Admit your ignorance about Black experience and Black history. Then do something about it.

Confront your racism. Sit with the discomfort. There is no way to tell the truth about race in this country without white people becoming uncomfortable.

Confront racism elsewhere courageously, with your family, friends and colleagues. Do not be silent. Until white people call out white people, there will always be safe places for racial ugliness.

Demand that your parish and diocese sponsor a series on race. Tell your priests, religious educators and ministers of the word to make anti-racism a regular feature of their homilies and religious formation.

Contact your bishop and ask how anti-racism is part of your church leaders' formation for ministry. Ask him to require the teaching of Black and brown Catholic history in every Catholic educational institution.

Work for reparative justice. Work to stop the closings of active African American parishes. Reinvest in and expand the Black Catholic educational system.

Work in your community to protect Black lives, eliminate racism in our systems, end mass incarceration, and secure police reform and accountability.

*This story has been updated to clarify attribution and add additional links and citations.