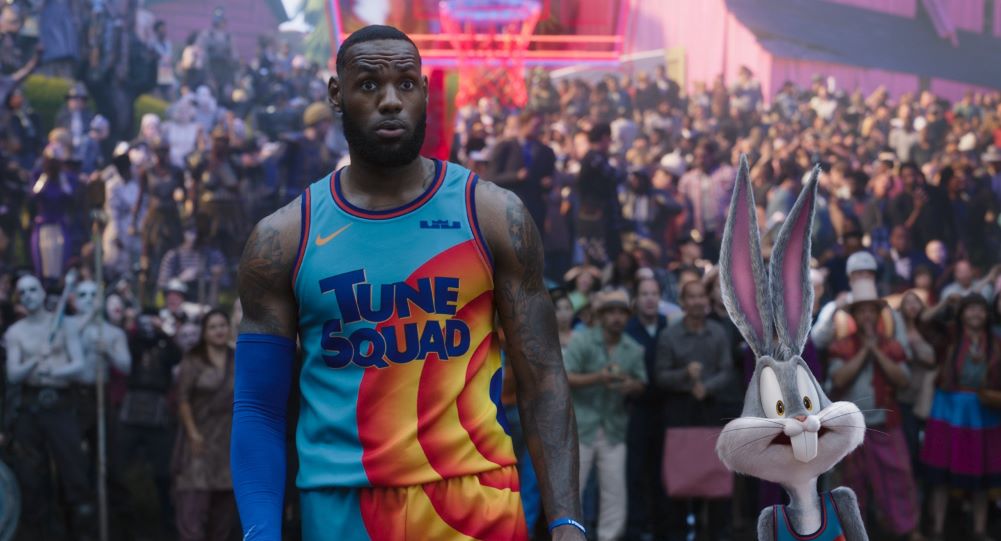 "No one knows who I am or what I do," laments Don Cheadle's Al G. Rhythm in the new film, "Space Jam: A New Legacy."

We first meet Al G. Rhythm (the algorithm — get it?) dressed in black and standing in what looks to be an off-brand "Matrix" set, complaining about the lack of respect he's been shown. He, despite being the apparent god of the so-called Warner 3000 Serververse, wants more fame, glory, respect.

Al is determined to increase his status by leveraging the fame and glory of NBA all-star LeBron James, whose social media influence alone catches the attention of the concerningly sentient algorithm.

Why does an algorithm want to be respected? What exactly does a partnership between this Warner 3000 tech and LeBron James produce, aside from 3D renderings of James fighting Batman? And is anyone concerned that this algorithm and/or artificial intelligence is able to send emails without any apparent input from real, flesh-and-blood executives?

"No one knows who I am or what I do," says the algorithm. And the latest installment in the "Space Jam" franchise relies prettily heavily on this to be true not only of the characters but of the viewers, as well.

To be honest, it went better than expected. James is a far better actor than his "Space Jam" predecessor, that other NBA legend, Michael Jordan, and the movie is fun — so long as you temper your expectations.

After all, you signed up to watch a movie about LeBron James playing basketball with cartoon characters.

After rejecting Al's offer, James and his fictional son and aspiring video game designer, Dom (Cedric Joe), find themselves sucked into the Serververse and forced to stand before the almighty algorithm himself. And, skipping to the plot point we all know is coming, James must defeat Al's basketball team to save his son, who Al tricks into joining his team.

After all, what's more appealing to a teenager who wants to make video games than some algorithmic artificial intelligence that has taken an interest in your work?

James is given 24 hours to assemble a team. You might be able to guess who he bumps into first.

"So, you want me, a talking cartoon bunny, to play with you, an NBA superstar, in a high-stakes basketball game?" Bugs Bunny, turning to us, the audience, says with a wink. "Sounds awfully familiar."

More things that may sound familiar: "Game of Thrones," "Superman," "Harry Potter," "The Matrix." Did you remember that these are all Warner Bros. properties? Well, if you didn't, you won't forget again. James and Bugs journey through the Serververse on a stolen spaceship (poor Marvin the Martian) collecting the Looney Tunes crew from the definitively non-Looney franchises they'd been auditioning for.

To be clear, the Looney Tunes were not the dream team James was hoping to assemble. But that's the team he got. And, not unlike the 1996 version of "Space Jam," the Tunes come up short in the first half of the literal life-and-death game only to rise to victory in the second half, after being told to be true to their looney selves.

It's an impressive comeback; not everyone can say they came back 1,000 points.

How does a team fall 1,000 points behind? Style points — a completely arbitrary and subjective feature that Dom wrote into his video game and Al stole for his own villainous purposes — are the reason. Rather than simply score points the old-fashioned way — you know, one, two, maybe three points at a time — style points mean any array of insane and physics-defying moves might increase the score tenfold, rules be damned.

In the end, having fun, a handful of classic Looney Tunes pranks and mending a broken father-son relationship and is enough to save the day. That, and literally breaking the digital world in which Al holds control. And after nearly two hours of nostalgia, video game sounds, a mashup of animation styles, bright, bright colors and an entire Comic-Con worth of cosplayers bumbling around in the background as extras from every Warner Bros. franchise in living memory, you'd be forgiven for glancing at your watch.

And yet, I couldn't switch out of my HBO Max account without feeling deeply troubled.

“Space Jam” is a fun movie: the acting isn't bad — dare I say Don Cheadle was excellent — I laughed out loud more than once and I love seeing Marvin the Martian no matter how many times his spaceship gets stolen. Again, it's the Looney Tunes, LeBron James and a completely over-the-top, high-stakes basketball game. I think we all know what we're getting.

But underneath it all is a somewhat ham-handed attempt to wrestle with something pretty worrying about our cultural moment. Roll your eyes if you must — and I did — at the villain's name, but the general shrug with which the entire cast of characters treats the godlike, algorithmic artificial intelligence calling the shots feels familiar.

Juxtapose this intelligent, data-driven, process-oriented machine with the arbitrary, throw-everything-at-the-wall-and-see-what-people-like-best approach of "style points," and you have a pretty good snapshot of our collective lives.

We want to be impressed; we want to be wowed; we want to imagine the style our lives might have if only everything hadn't gotten in our way. And the algorithm knows it and will keep serving up these fantasies with deadly precision, trapping each of us in our own fantasy world. Fill in your own social media or streaming service anecdotes.

Again, it's worth noting: They didn't beat the machine; they broke it. That was the only way out.

I, for one, will keep that in mind, just in case this looney film is a warning of an impending robot apocalypse. God knows I can't beat anyone at basketball.