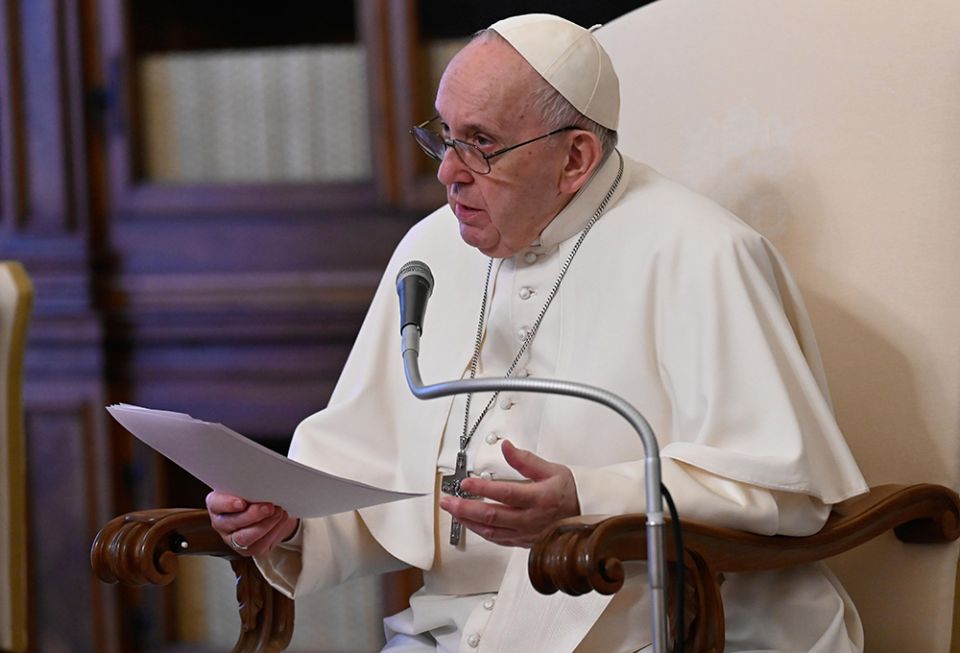 Pope Francis leads his general audience in the library of the Apostolic Palace at the Vatican April 28. (CNS/Vatican Media)

In the third seasons of the Netflix series "Shtisel," an eminent ultra-Orthodox rabbi who heads a yeshiva in Jerusalem offers that bit of sage advice to a star student who is dealing with a life-and-death decision.

"A long path that is short" is indeed a good way to explain the virtue of synodality, the biggest wager Pope Francis has made for the Catholic Church today.

Five and half years after he delivered what can be called his magna carta on synodality to the 2015 assembly of the Synod of Bishops, the pope's persistent push in favor of a synodal Church is having effects.

In different areas of the Catholic world, there are ecclesial events of a synodal nature unfolding or being prepared.

A synodal movement that requires time and presence

There is Australia's historic Plenary Council, which will hold its first meeting in October. And there is the "synodal path" already underway in Germany.

Preparations are currently being made for a national synod in Ireland and, after much insistence from the pope, the Church in Italy is finally beginning plans for its own synod.

The editors of the Jesuit-run magazine, America, have just argued for plenary council for the Catholic Church in the United States.

At the supra-national level, the Latin American bishops have launched their own ecclesial assembly, the first-ever "Ecclesial Assembly of Latin America and the Caribbean".

This synodal movement is unfolding at a time of great uncertainty due to the coronavirus pandemic. Synodality, which means the people of the Church "walking together", requires gathering together in assemblies.

Some of these assemblies (e.g. in Germany and Australia) have been delayed or postponed, and the same is likely to happen again in other places.

And it's possible the next ordinary assembly of the Synod of Bishops — which is scheduled for October 2022 and based on the theme — "For a synodal Church: communion, participation, and mission" — could also be delayed.

It is not certain that participants from poor countries, where the pace of vaccinations is much slower, will be able to gather locally for the preparation phase or that their representatives will be able to travel to Rome.

The theological and institutional dimensions of synodality

Pandemic aside, postponing the assembly on synodality could be a good thing. It would mean more time for preparation.

So far, most of the discussion surrounding synodality has focused on its pastoral aspects.

But a two-article dossier published by theologians Serena Noceti, Rafael Luciani and Hervé Legrand in the latest issue of the Italian magazine Il Regno, points out that there are theological and institutional dimensions to synodality that need attention.

One particular aspect that will have to be addressed is the role of papal primacy in synodality — both at the universal level and the national/local level.

This is a key issue that will have important practical consequences.

In one of his first and most important speeches on the model of episcopal leadership, in September 2013, Francis talked about the bishop in these terms:

What is the role of the episcopal leadership in the synodal path together with the People of God? Walking in front of them, walking in their midst or walking behind them?

Discernment, not a vote in parliament

What we have seen from the Synod of Bishops assembly for the Amazon region (October 2019) and its aftermath (the apostolic exhortation Querida Amazonia of February 2020), Francis seems to understand his role as the referee of the presence or absence of genuine discernment in a synodal event.

This is how he phrased it in a note published in September 2020 by the editor of La Civiltà Cattolica, Antonio Spadaro, SJ:

There was a discussion [at the 2019 Synod] ... a rich discussion ... a well-founded discussion, but no discernment, which is something other than arriving at a good and justified consensus or relative majorities […] We must understand that the Synod is more than a parliament; and in this specific case the Synod could not escape this dynamic. On this issue the [2019] Synod was a rich, productive and even necessary parliament; but no more than that. For me this was decisive in the final discernment, when I thought about how to write the exhortation [Querida Amazonia].

This way of assessing synodality is more typical of the superior of a religious community that has undertaken a process of discernment than that of a bishop.

But the Catholic Church is not the Society of Jesus. Discernment works, if at all, in very rarified spiritual groups. Most bishops have no background or training in it.

The same can be said for the People of God who are supposed to be involved in synodality.

It's especially since the late 1990s, also thanks to John Paul II's encyclical Ut Unum Sint (1995), that we have started talking about a new role for the papacy in the ecumenical ecclesiology articulated at the Second Vatican Council (1962-65). 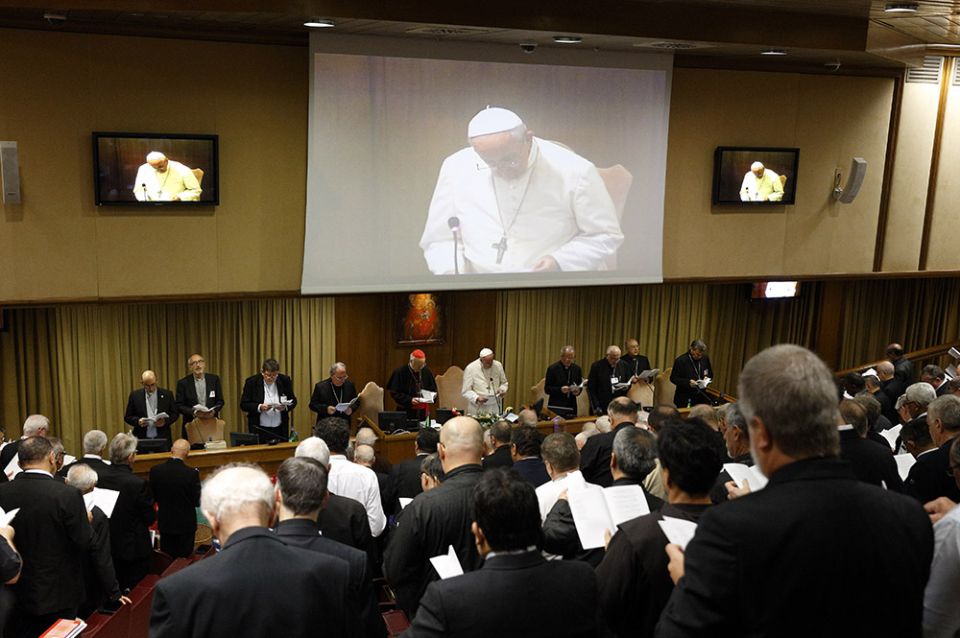 A changed paradigm for papal primacy

In a long article published in 2000 in the journal Cristianesimo nella Storia, Peter Hünermann, emeritus professor of theology at the University of Tübingen, formulated the concept of the papacy as a "notarius publicus".

The primacy's constitutive role, in this sense, would be the task of facilitating and maintaining the unity of Catholic faith and Church communion.

Hünermann's essay was a commentary on John Paul II's motu proprio Ad tuendam fidem (1998). The German theologian offered a historical perspective on the development of papal primacy, trying to understand the deep changes in the function of primacy for the Church in modernity.

He noted that the Vatican I paradigm of papal primacy — as one of jurisdiction, in stark legal terms — had been overcome, not just by the ecumenical outlook of Catholicism, but also by the self-understanding of the papacy as "communicative action".

Especially after Vatican II, papal primacy is not really (or no longer) about defining the faith. Rather, it is about witnessing and confirming the faith of the people, voiced in the consensus of their representatives and in light of Scripture and Tradition.

Hünermann wrote the article well before the papacy embraced synodality, but it is still relevant for the current debate.

Of course, the approaches to the issue of the role of primacy depend on the kind of synodality we have in mind.

Is synodality a way to renew the pastoral style of the Church in the existing institutional and theological system?

Or is it a moment for addressing issues, such as the role of women in the Church and ministry, and opening the Church to the possibility of institutional and theological developments?

This is an essential question that will have to be clarified at some point, sooner rather than later.

Primacy has emerged in recent years as an ecumenical issue, especially when one looks at the role it plays in the intra-Orthodox rifts between Constantinople and Moscow. Recall the tensions on display in January 2019 when the Ecumenical Patriarch Bartholomew conceded autocephaly to the Orthodox Church in Ukraine.

The specter of a universal, pope-like role for the Patriarch of Constantinople haunts some Eastern Orthodox Churches, but the complicated natured of papal primacy should not be too quickly overlooked by Catholics.

It now tends to be dismissed as irrelevant because of the friendly, genteel style of Pope Francis.

But if synodality is to be a key aspect of being Church in the future of Catholicism, this means that we need to keep in mind that at some point, in the next few years, there will be another pope.

And he could have a way and style of interpreting synodality that is very different from that of the current Bishop of Rome.

Commentary | Synodality and papal primacy: Questions regarding the Catholic Church today and the next pope