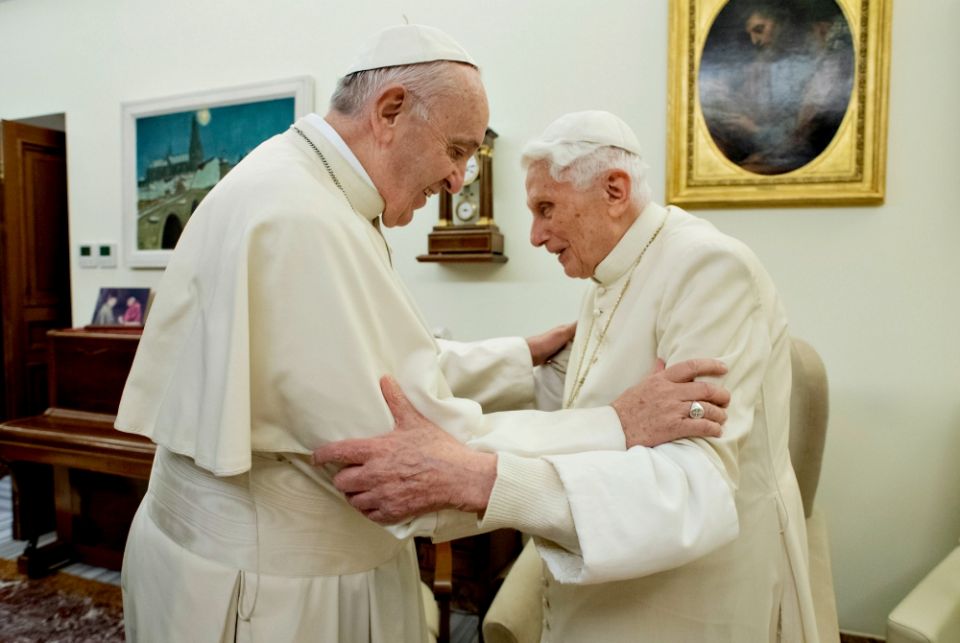 Many today are unaware that the Second Vatican Council actually gave very little direct attention to papal reform. As the papacy had been the focus of the First Vatican Council in the 19th century, the bishops at Vatican II (1962-65) thought it best to redress the resulting ecclesiological imbalance by developing a more robust theology of the episcopate, particularly with regard to episcopal collegiality.

Yet, the post-conciliar church, including both popes and theologians, was well-aware that more work was needed to purge the papacy of its monarchical trappings. Pope Paul VI sold the triple tiara after his coronation and John Paul I did away with the practice of papal coronations altogether. He also ceased to employ the "papal we."

Theologians like Jean-Marie Tillard offered important theological reconsiderations of the ecclesiological foundations of the ministry of the bishop of Rome. Pope John Paul II's Ut Unum Sint (very likely ghostwritten by Tillard) represented the development of doctrine on the papacy with the attention it gave to the episcopal foundation of the papal office. In that groundbreaking 1995 encyclical, the pope emphasized, in a way that Vatican II had not, that the papacy was grounded in the ministry of the bishop of the local church of Rome, the church of Peter and Paul.

It is in keeping with that renewed emphasis on the pope as bishop of the church of Rome that Pope Benedict XVI's surprising retirement was originally understood. For if, as Vatican II taught, a bishop were expected to voluntarily retire if his health impeded the performance of his duties as bishop (a teaching that Paul VI further developed with the establishment of a set age of retirement for bishops), then should this not hold as well for the bishop of Rome?

When Benedict announced his decision to step down from his office in 2013, I, along with other theologians, hailed it as an important step toward a much needed desacralization of the papacy and a recovery of the papacy's episcopal foundations. Yet, as we approach the seventh anniversary of Benedict's momentous retirement from papal office, some ecclesiological difficulties have come to light.

There were hints of a problem right from the start when he chose the title of "pope emeritus," rather than the more ecclesiologically appropriate "bishop emeritus," continued to wear the white papal cassock, and chose to continue his residence within the Vatican walls. However, at the time, Benedict had also promised that he would remain "hidden from the world." The recent film "The Two Popes" puts words on Benedict's lips that dramatically express the substance of his proposed retirement: "silence incarnate."

At the time, his abdication was so remarkable that many gave him the benefit of the doubt, and so chose not to make too big an issue of the specific features of his retirement.

Unfortunately, over the past 10 months we have seen signs of the problematic character of this arrangement. Last April, Benedict published his own analysis of the clerical sexual abuse crisis, one that laid the blame particularly on moral laxity in the church, defects in contemporary theological ethics and a broader culture of moral relativism. His analysis stood at a considerable distance from that of Pope Francis, who has focused instead on a pervasive clerical culture as a key factor in our current crisis.

Related: The myth of the self-regulating institution of 'pope emeritus'

Now, with Cardinal Robert Sarah, Benedict has released a volume that includes an essay of his that reasserts the doctrinal foundations of priestly celibacy even as new models for priestly ministry were but a few months ago being explored in an episcopal synod. Recent controversy over the publication has apparently led Benedict to withdraw his name as co-author of the volume.

Were Benedict to have resigned in a more appropriate manner, his interventions on these matters might still have raised eyebrows, but to a much lesser extent. In our present situation, the publication of views on controverted issues, when offered by a man who insists that he too still merits the title "pope" (albeit pope emeritus), who continues to wear papal garb and who still resides in the Vatican, is deeply problematic. It indirectly attributes an entirely inappropriate ecclesiastical weight to his views. It can also offer cover for those who wish to further undermine the papacy of Francis.

Some commentators have noted that in this most recent essay, Benedict is only defending the principle of priestly celibacy, as Francis has himself done. Perhaps. But this conveniently ignores the present context for this publication.

It comes at a time when many, including not a few prelates, have leveled veiled accusations of heresy at the current pope. It comes at a time when those same prelates have fomented a form of "loyal opposition" that would have been bludgeoned into submission, with their enthusiastic support, under previous popes.

Most importantly, it comes at a time when the pope is discerning how best to respond to the remarkable Amazonian synod's many requests and proposals, including the request for the ordination of women to the diaconate and viri probati, mature married men, to the ministerial priesthood. 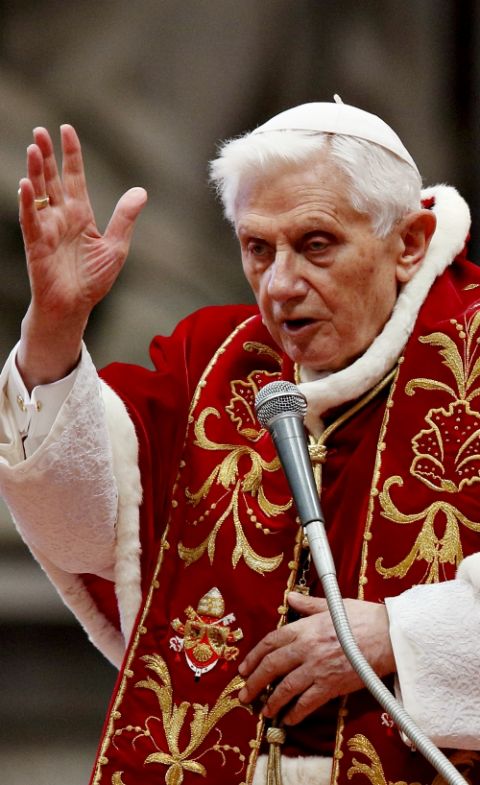 Pope Benedict XVI delivers a blessing at the conclusion of a Mass in St. Peter's Basilica at the Vatican Feb. 9, 2013, two days before he announced his resignation. (CNS/Paul Haring)

In such a charged ecclesial environment, it is disingenuous to spin this recent publication as an effort to defend Francis' own views on celibacy.

There is an additional feature of this current situation that merits consideration. Many believe that one of the factors that motivated Benedict to resign from papal office was his experience as a close witness to the final years of his predecessor's pontificate, marked as they were by the debilitation of Parkinson's disease.

John Paul II's advanced condition, in his final years, led some to speculate on whether the much-diminished pope was fully in possession of his intellectual faculties. What if the pope had had Alzheimer's disease instead? Some also wondered whether, in his greatly weakened condition, he was subject to external manipulation.

The irony is that Benedict's interventions over the past year have raised questions regarding whether, given his own infirmity at the age of 92, he is being manipulated by persons eager to undermine the current papacy even if Benedict himself is not.

Where does this situation leave us? Yes, the pope could make modifications in current law, motu proprio, or create a commission to establish norms for popes who retired from office, but I find neither option to be very likely. I suspect Francis would be loath to cast Benedict in a negative light in any way, as either course of action would almost certainly do.

This then suggests an alternative course of action. The time is ripe for a thorough revision of the current Code of Canon Law. It has become increasingly clear to many that our present code was enacted before there was sufficient time for the ecclesiological vision of the council to mature. Such a fresh revision would allow the thorough reconsideration, among other things, of church law regarding papal office.

First, some new provisions must be made for the removal of a pope who is no longer physically and mentally capable of exercising his office. Care would have to be taken, of course, to protect such measures against the kind of palace coups so common in times past.

Second, provisions must be made for the free papal resignation of office. New policies might draw in part (but only in part) from the precedent of the last two popes to resign their office: the onetime hermit, Pope Celestine V, who, upon abdication, dramatically removed his papal regalia and sought a return to his hermitage (a desire thwarted by his successor, Boniface VIII, who instead placed him under house arrest), and Gregory XII, who, having been forced to resign at the conclusion of the Western Schism, was given an entirely different ecclesiastical title as the cardinal bishop of Porto and legate of Ancona, where he would reside until his death.

These canonical provisions would require either that the former bishop of Rome be given a new pastoral charge, or if he were beyond the age of retirement, be designated bishop emeritus of Rome. He would be prohibited from wearing any papal regalia, from residing within the Vatican walls and would be expected to follow the counsel given to all retired bishops, namely that they be vigilant in avoiding any actions that might undermine the ministry of their successors.

Given the need to preserve the special character of the papal magisterium, such provisions might well include careful restrictions on publications. Such restrictions would not apply if the former bishop of Rome were granted a new pastoral charge over a local church.

Benedict's dramatic retirement from office almost seven years ago remains a landmark in the development of the papacy; prudent canonical provisions must ensure that its impact be a positive one.

'I thought of religious life, but feared I wouldn't make it'