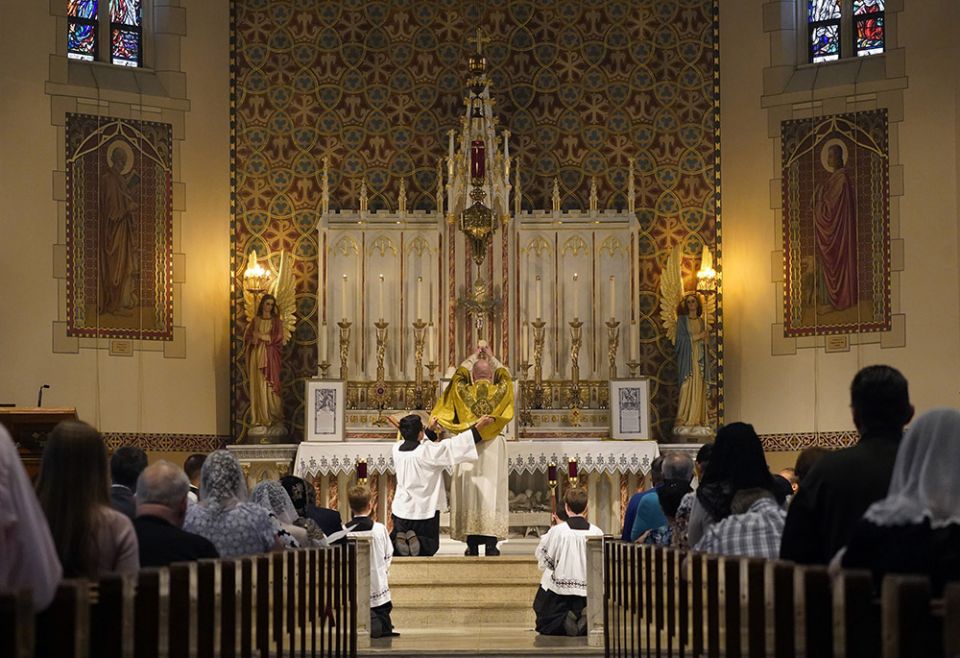 Fr. Stephen Saffron elevates the Eucharist during a Tridentine Mass at St. Josaphat Church in the Queens borough of New York City in this July 18 file photo. The Vatican's Congregation for Divine Worship and the Sacraments has responded to bishops' questions about Pope Francis' July document limiting use of pre-Vatican II Mass. Among the clarifications: Confirmations and ordinations are not permitted to be celebrated according to the older rites. (CNS/Gregory A. Shemitz)

The Dec. 18 publication by the Congregation for Divine Worship of responses to questions (or dubia) sent to them about Pope Francis' motu proprio Traditionis Custodes, restricting the use of the traditional Latin Mass, added a bit more ammunition to those who insist on engaging in battles about liturgy. I wish they would stop. They won't.

The responses, like the initial document, invite us all to remember that our liturgy is always in some sense in relation to our ecclesiology, perhaps even an expression of that ecclesiology. In this regard, it is notable that the most vocal opposition to the pope's restrictions are found in the English-speaking countries where opposition to the pope on other grounds has been most pronounced — countries like the United States.

In the letter accompanying the responses, Archbishop Arthur Roche, prefect of the congregation, wrote:

It is sad, but it is also predictable. Way back when I was in seminary, which was a very long time ago, we all knew the old joke: What is the difference between a terrorist and a liturgist? You can negotiate with a terrorist.

People take their worship very seriously. Our rituals accompany a Catholic's most important milestones — marriage, birth and death — as well as lend regularity to the rhythms of the quotidian. The liturgical seasons shape our spirituality as we move from seasons of expectation and penance to seasons of rejoicing and on to ordinary time. Liturgy reflects more than our tastes. It gives voice to our deepest beliefs. In that sense, and only in that sense, all the hullabaloo about Traditionis Custodes is a good thing: At least they care!

But what, exactly, is the focus of that care if it becomes so malicious against the successor of Peter? Go to the website Rorate Caeli, or to Father Z's blog and read what is published. Check the comments.

I wish to focus readers' attention, however, on the second part of the quote above, the part about bishops needing to "safeguard communion." In the reporting of the pope's decree, and of these clarifications from the congregation, it is important to recognize that the problem was never with the vast majority of those members of the laity who, for whatever reasons, find themselves drawn to Mass in Latin. The problem was always a problem with bishops and clergy for whom the old rite became an expression of an ideological rejection of the Second Vatican Council.

Stephen Adubato published a beautiful column here at NCR on Dec. 9 that reminded us not everyone who goes to a Latin Mass does so for ideological reasons. "The Latin Mass is also a haven for those who feel misunderstood or outcasted for their unconventional personalities and aesthetic sensibilities," he wrote.

Adubato noted that a variety of personality types might be drawn to the traditional rite for different reasons, but I think all of us can relate at different times to the words of one person he quoted as saying: "At Latin Mass there's a sense that what's going on inside the church is different from what's going on outside … something important is going on that's set apart and dedicated to God." Put differently, perhaps there is a kind of participation in liturgy that is made possible when you do not feel compelled to understand exactly what is said. And perhaps all of us have that need at times.

I called for attention to be paid to the spiritual needs of these lay faithful in the immediate aftermath of the publication of Traditionis Custodes. Shortly thereafter, the response of some to the pope's instruction only served to demonstrate how needed it was: The venom directed at Pope Francis was astonishing.

The problem was not with Adubato and those like him. The problem was with some of the leaders of the Latin Mass movement, with those bishops and clergy who were drawn to the old rite as a way of signaling their rejection of the reforms of Vatican II. They might have been able to abide Vatican II when they thought, incorrectly, that the toothpaste of reform was being put back into the tube under the two previous pontificates. I would argue that is mostly a mischaracterization of the previous two pontificates, but there were others who thought that was so.

Other bishops, though not hostile to reform themselves, simply refused to sound the alarm or discipline those under their pastoral care who were demonstrating an increasing hostility to Vatican II.

What is undeniable is that no one can think Francis is trying to dial back the reforming impetus of Vatican II. In fact, he has brought all the energy and creativity that have marked the reception of Vatican II in the church of Latin America to the chair of Peter and thence to the universal church. This pontificate has turned those who held their nose at Vatican II from skeptics into schismatics.

My colleague Christopher White reports that the Pontifical North American College, in response to Traditionis Custodes, stopped giving instruction in the pre-Vatican II rite to seminarians there. What made the rector at the seminary think it was a good idea to offer such instruction in the first place? There are bishops on the board of the North American College. Did they sign off on this? If so, why? Why did bishops not take steps to rein in Fr. Zuhlsdorf? He is under a vow of obedience to one of them, is he not?

This, then, is the challenge for the bishops, to make sure the spiritual needs of those Adubato interviewed are met while also making sure those same people are not being led down a schismatic path by those in the Latin Mass movement who are hostile to Vatican II and to the pope. It is not an easy task, but the bishops largely brought it on themselves for failing to shepherd the movement. That is why Pope Francis has had to step in. Again.