On election night last year, the Commonwealth of Virginia was unexpectedly close early in the evening. But as the map of the state filled in, it became obvious that the large swaths of rural precincts had reported their results first and Democratic party stronghold Fairfax County, a suburb of Washington, was late with its tallies. In the end, Joe Biden beat Donald Trump by more than a margin of 69.9% in Fairfax County to Trump's 28%. Statewide, Biden won the Old Dominion by more than 10 points. Virgina was now officially blue.

FiveThirtyEight has Democratic candidate Terry McAuliffe ahead by only 1.5% in the polls over Republican candidate Glenn Youngkin, and Youngkin has been closing the gap since August. Then, with COVID the principal concern, McAuliffe held a healthy lead in the polls, but COVID is like the economy: When it is bad, it is the only issue, but once the number of new cases dropped, other issues surged to the fore. And, on the issue of education, Youngkin struck gold.

Last week, CNN's Chris Cuomo looked at some of the polling in Virgina with Henry Enten, the network's numbers cruncher. What stood out was not that Youngkin was doing so much better, +5 points, among voters who said the economy was the most important issue. With inflation, gas prices and supply chain problems, no one with a D after their name is going to do well on that issue. 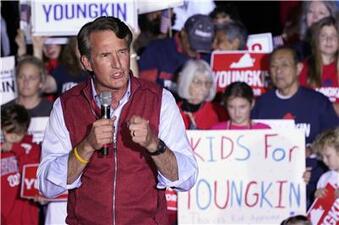 No, what was surprising is that those who cited education as their number one issue sided with Youngkin ever so slightly, by 1 percentage point. Usually Democrats do really well with voters for whom education is the most important issue. Teachers' unions are among the strongest constituencies the party has.

Yet Youngkin was leading. He isn't winning because the teachers' unions now support the GOP. He is winning because he has tapped into parent anger, much of it based on misinformation, about the teaching of critical race theory in the public schools.

Last week, Glenn Kessler, The Washington Post's fact-checker, demonstrated the distortions in an ad that featured a mom complaining about her son reading Toni Morrison's novel Beloved. The student was taking an Advanced Placement course and was a high school senior. If he couldn't handle a 20th-century novel about the brutality of slavery, how could he handle an antebellum novel about the brutality of slavery like Uncle Tom's Cabin? How does a high school teacher explain the run-up to the Civil War without referencing Harriet Beecher Stowe's classic?

Then, when the topic came up in a debate, McAuliffe made a terrible blunder. "I don't think parents should be telling schools what they should teach," he said. Who does he think elects the school board members who do decide what schools teach? The same voters who will going to the polls tomorrow.

The issue of education, and how it plays, could be a turning point for electoral politics in the state. Once a part of the Solid South that supported the segregationist Democrats, Virginia switched when Democrats embraced civil rights legislation and became part of the conservative backlash that saw the Southern states move into the GOP column. Virginia backed Nixon every time he ran for the presidency, in 1960, 1968 and 1972. In 1976, Jimmy Carter, the first southern candidate in decades, swept the south — except for Virginia, which backed Gerald Ford. Bush pere and Bush fils both won it twice, and Sen. Robert Dole won it in 1996. In 2012, Barack Obama won the state, and no Republican presidential candidate has captured the state's electoral college votes since. In addition to Fairfax County, Democrats have won the exurban counties, Prince William and Loudon, adjacent to it.

Races for the governor's mansion followed a similar trajectory. In 2017, current Gov. Ralph Northam trounced his Republican opponent, Ed Gillespie, by 9 points, and in 2013, McAuliffe narrowly beat Ken Cucinelli. (McAuliffe could not run in 2017 as Virginia does not permit a candidate to seek consecutive terms.) You have to go back to 2009, after Obama's big win the year before and when the tea party had been formed, to find a winning GOP candidate, Bob McDonnell.

McAuliffe's opponent, Youngkin, is hoping the pattern repeats itself: A big Democratic win in the presidential race leads to buyer's remorse and the GOP picks up the governor's race and heads into the midterms with the wind at their back.

"Virginia’s Hispanic population broke the 900,000 people mark in 2020, growing by more than 275,000 or 44%," reported Mel Leonor of the Richmond Times Dispatch, after the recent census data came out. “Nearly 11% of the state's population is now Hispanic, compared to 8% a decade ago.”

The Asian American population also grew from 6.5% of the state's population in 2010 to 9% in last year's census. Democrats poll well among both groups and both groups are overrepresented in the suburbs.

People move to the suburbs for a variety of reasons. Affordable housing is always near the top of the list, but the desire for good schools is also a big reason. Perceptions about what constitutes a quality school, and why so many people think suburban schools are per se better than urban ones, are very complicated as Jack Schneider explained in The Atlantic in 2017:

As a growing body of research suggests, however, test scores don't truly measure school quality. And, if that is the case, chances are the greatest threat to urban schools isn't a flaw in the design or execution of urban education. Instead, it is a self-fulfilling prophecy—one in which privileged families presume city schools to be failing and, in taking flight from them, bring about a real decline.

In terms of tomorrow’s election, no one really knows how issues of racial and ethnic diversity intersect with an issue like education when it comes to voting patterns.

Add to this the ongoing debate about how Donald Trump improved his margins among Latino voters in 2020, and the resistance of many entrenched in the Democratic Party to rethinking how they approach issues of race and gender, and I predict tomorrow might prove to be a wake-up call for the Democrats.