Wave of worker strikes resurrects our call to solidarity 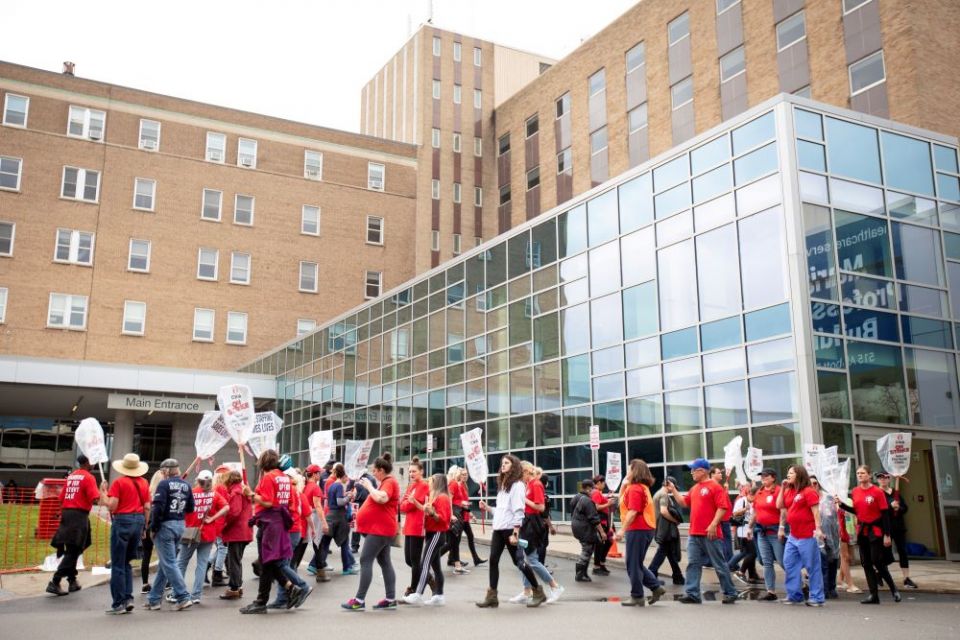 Health care workers at Mercy Hospital in Buffalo, N.Y., participate Oct. 4 in an ongoing strike protesting working conditions in hospitals amid the coronavirus pandemic. Workers are also striking at John Deere and Kellogg's in a nationwide wave of demands for higher pay and better working conditions. (CNS/Reuters/Lindsay DeDario)

Ten thousand United Auto Workers in three states went on strike last week against the John Deere company after workers rejected a contract that included raises that did not keep up with inflation and removed future employees from the company’s pension plans.

Workers at Kellogg's plants in four states are on strike over pay and benefits' issues.

In Buffalo, N.Y., a strike by 1,900 nurses at that city's Mercy Hospital has entered its third week. "The hospital system failed to reach a fair agreement on a new contract. Issues on the table include understaffing, equipment shortages, low wages, and healthcare costs," according to the Communications Workers Local 1133, which represents the workers.

Nationwide, 2021 has seen more strike activity than I can remember. What is going on?

"American workers are now flexing their muscles for the first time in decades," wrote former Labor Secretary Robert Reich in the Guardian. "You might say workers have declared a national general strike until they get better pay and improved working conditions."

There are plenty of job openings. Revised figures show that in July, the nation had a record 11.1 million job openings. And more people are quitting their jobs than ever before: The quit rate hit 2.9% in August. A report by the National Federation of Independent Businesses reported that 51% of small businesses reported being unable to fill job openings in September. Driving to the market the other day, I counted 14 businesses that had posted "Help Wanted" signs, including several that promised a signing bonus.

The extra $600 per month in unemployment benefits expired in the middle of the summer and had no discernible impact on the job market, giving the lie to the Republican talking point that low-wage workers were basking in the luxury that extra $600 per month provided, which accounted for their failure to return to work.

"Corporate America wants to frame this as a 'labor shortage.' Wrong," wrote Reich. "What's really going on is more accurately described as a living-wage shortage, a hazard pay shortage, a childcare shortage, a paid sick leave shortage, and a healthcare shortage. Unless these shortages are rectified, many Americans won't return to work anytime soon. I say it's about time.”

Indeed. Maybe all those signs that read "Thank You, Essential Workers" convinced the people who drive the vans and stock the shelves and clean the bed pans and mop the floors that they really are important — and that important people deserve a living wage!

Strikes are only effective when there is a union to organize them. And the rate of unionization in the country is low: According to the Bureau of Labor Statistics, only 10.8% of employees were in unions last year, compared to 20.1% in 1983. The percentage of workers in unions ticked slightly up last year, which is a good sign, but the fact is that unions have not recovered from the assault on organized labor Ronald Reagan started when he broke the air traffic controllers' strike in 1981.

Hopefully, that trend really is changing, but it looks like it won't happen without a fight.

The church stands with the workers. It recognizes the right to form a union and the right to strike. This is Catholic social doctrine 101.

Noam Scheiber, the country's best labor reporter, wrote about the anti-union efforts by Starbucks last week in the New York Times. "Many of the ways Starbucks has responded in Buffalo — where union backers seek to become part of Workers United, an affiliate of the giant Service Employees International Union — are typical of employers," Schieber wrote. "The measures include holding meetings with employees in which company officials question the need for a third party to represent them."

Of course, a union is not a "third party;" it is the workers themselves, only organized.

It has been so long since we have seen this kind of ferment, it is fascinating to see how the culture responds. A magazine I do not usually encounter recently ran an article outlining five things people can do to support strikers. The article, by Jacqui Germain, appeared in Teen Vogue. How wonderful that young people are seeing the need for solidarity with the workers.

There is nothing surprising about where the Catholic Church stands on these issues. The church stands with the workers. It recognizes the right to form a union and the right to strike. This is Catholic social doctrine 101.

The labor ferment this year has the potential to ignite the imaginations of two generations of young people who simply do not recall a time when unions were strong and workers had more leverage. The prospect of overthrowing the neo-liberal idols is exciting. Pope Leo XIII – and every pope since – has pointed to the moral necessity of workers being able to form a union.

There is work to do. The items Reich listed — a living wage, hazard pay, affordable child care, paid sick leave and health insurance — all need to be enacted as public policy if workers are to find justice, and justice is rarely achieved without a struggle.

Catholic Christians are called to be a part of that struggle. The pandemic has exposed the limits of neo-liberalism for all to see. It is time to — pardon the expression — capitalize on the moment and support workers in their struggles for better pay, better benefits and a more just economy, one that extends solidarity to all. You might say the slogan for this year of worker solidarity should be "Fratelli tutti."

Opinion | Wave of worker strikes resurrects our call to solidarity

Panelists say from day one, pope showed world he'd be a pastor