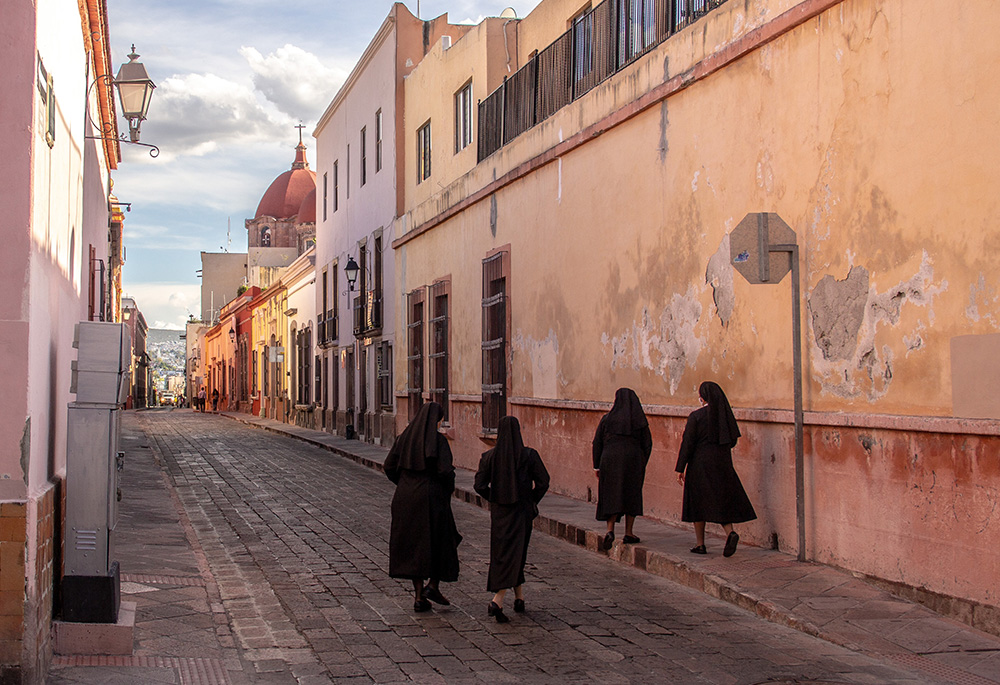 The sun is high and sharp today. For the first time in months there's not a cloud to be seen. On the Irish fields below it, the sheep stand like cardboard cutouts. But it's the daffodils whipping in the wind that make the scene. Their resistance is the kind of lesson in endurance we need right now.

It is Resurrection time in a world at war and struggling to choose between democracy, autocracy and polarization. Our institutions are shaking. All of them.

In the church, too, a massive shift is underway, the sound of which gets more muffled every day and the hollowness of which, at the same time, is calling to something deep in us. What will happen to us if this consciousness within us disappears completely?

Not much is being said about either the need for or the loss of an entire part of the church, let alone its growing effect on us. But the gap it leaves is beginning to be very clearly there. The problem is that the obvious hardly ever demands our attention. But take it away and see what happens to your sense of security, to your trust in tomorrow. Then the question is a loud and demanding one: What now?

For years, there has been a growing concern about the diminishing number of priests in the church. Everybody talks about it. I, on the other hand, have watched it all a bit wryly. After all, the real builders of the church, the people who have taken care of the church by developing ministries that few could yet see, but really needed badly, the ones who actually set out to meet the issues of the day, and gave their hearts and minds and lifetimes to the world have really been the orders of sisters. They, too, it seems are dwindling in number, if not in spirit. Will anyone notice? Will it matter?

CARA, the Center for Applied Research in the Apostolate, tells us that there were 160,931 sisters in the United States in 1970. And today? 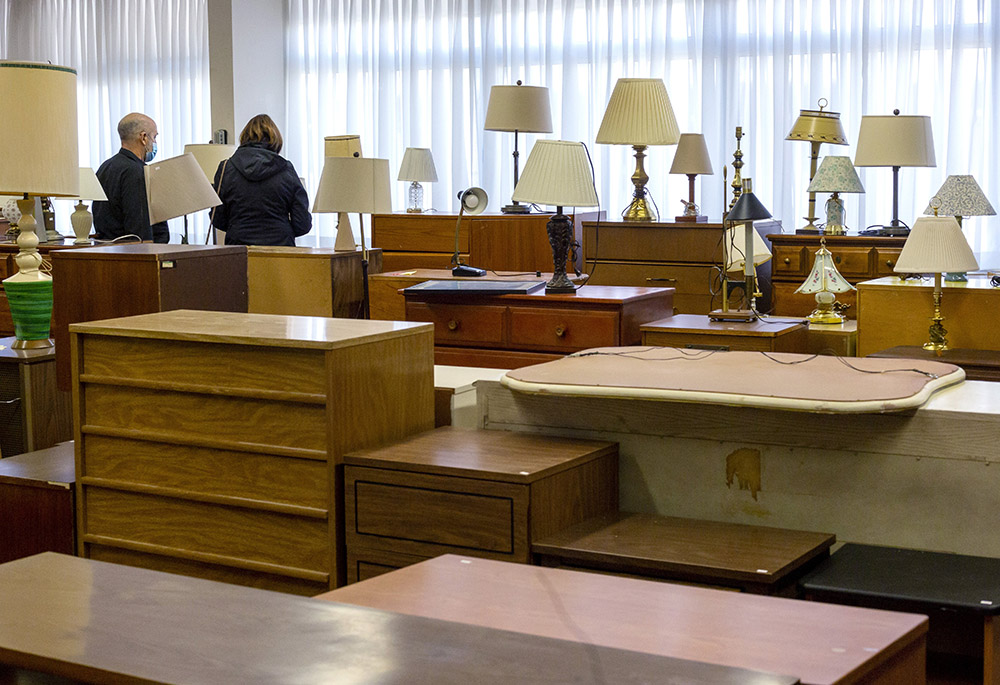 People in Farmington Hills, Michigan, browse items at an estate sale of the Sisters of Mercy March 19, 2021. The religious order can no longer support the convent as few sisters remain. (CNS/Jim West)

There were sisters in education, in nursing, in advocacy positions, in residential care, in child care, in soup kitchens and food pantries, spiritual direction, liturgy, catechetics, home visiting, counseling and whatever else they gave their lives to for something greater than themselves. They were the living memory of the Jesus who walked the dusty roads of Israel among us simply "doing good."

All the while, you and I and the church have largely taken sisters for granted. We simply assumed they would be there. But few understood the years of administrative experience, financial independence, service and deep spiritual vision the orders brought with them. Creating connections between a lifestyle of total immersion in the Scriptures and the outpouring of the self for others took both courage and risk. Whatever others they were.

First, perhaps, they were women and that fact shaded everything about an impending precipitous decline, consciously or not.

Women were meant, the church taught, to be "helpmates" not leaders. And so there came a day of reckoning, when the world around them began to accept the presence and professional gifts of women everywhere. It's not surprising that young women of our era left religious communities in droves at the first glance of the regimentation and anonymity and dehumanization that characterized pre-Vatican II religious life. These newly woke women wanted to do important things for God themselves.

And yet it was the presence of these tenders of the soul that had kept the church alive and the sign of the compassionate touch of God present everywhere. 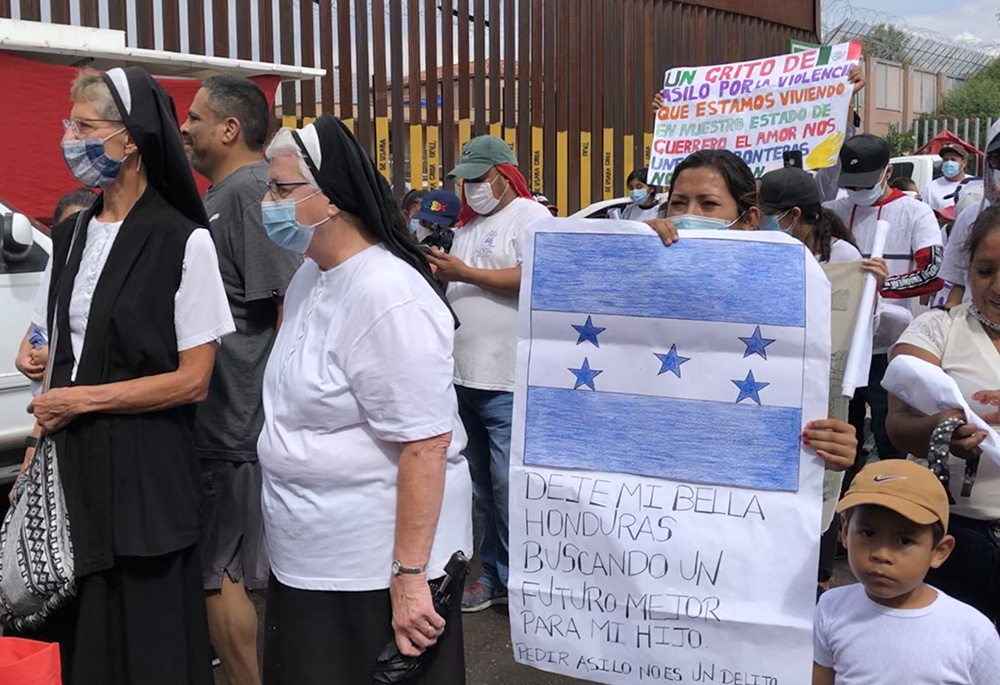 At the same time, it is the loss of these self-giving women that may well determine the rise and fall of the church in our midst. These women who have been the beating heart of God for the world, once gone, will be missed in a church that needs both spirit and heart.

The question, then, is clearly a major one and will, indeed, affect us all: Is religious life for women over?

One thing important to remember is this. The loss of large numbers of sisters in the last 50 years is not unique. In the 19th century, in fact, in the early 1800s, governments declared monasteries "useless." In Germany alone, 700 Benedictine monasteries were closed and their monasteries, properties, valuables and moneys absorbed by the state. Some 700 of them in a matter of years. Monasteries of Benedictine women were closed down, women religious were dispensed from their vows, forbidden to take new candidates and permitted only to "die in place."

Yet, as monasteries were eventually permitted to reopen, women gathered around them again, and began for centuries more to give themselves to a life of spiritual depth and the social care that Gospel life implied.

What had died had risen again! And out of that death, came another Resurrection.

It was an entirely new form of religious life as women's orders re-formed and relocated in great numbers to follow the various nationalities and serve the spiritual needs of each ethnic kind of emigres to the New World.

So in the shadow of those orders of women religious before us, the question, as entrance rates have dwindled is presently an overwhelming one. Can the church as we know it function as widely as it has without a body of "sisters" who model the faith and give their hearts to the world around them in the name of the Scriptures in which they live immersed. And if not, what then?

From where I stand, there are questions to be answered and issues to be considered that are important to the church, yes, but to us all, as well, whether we are in a religious community or not.

Is there any independent value in it at all now? If so, what is it?

In these next few weeks to come, I will look at religious life from the outside, as well as the inside. My concern is not simply those who might themselves be considering life in a woman's community. I'm really concerned that the church at large understands the heart and soul of religious life today. I will review the issues that arise when we ask ourselves whether — or even, should — religious life for women rise again in this time. Or not.

In the meantime, don't worry. As I heard a consultant say to a friend of mine a couple years ago, "Tell me about nuns. Every group that calls me in to work with them are, on average, in their 70s and working on their next five-year-plan."

Editor's note: This column has been adapted from Benedictine Sr. Joan Chittister's 2018 book What Are You Looking For? Seeking the God Who is Seeking You published by Paulist Press.

A version of this story appeared in the April 29-May 12, 2022 print issue under the headline: What are we seeking? Old orders or new? Or not at all?.