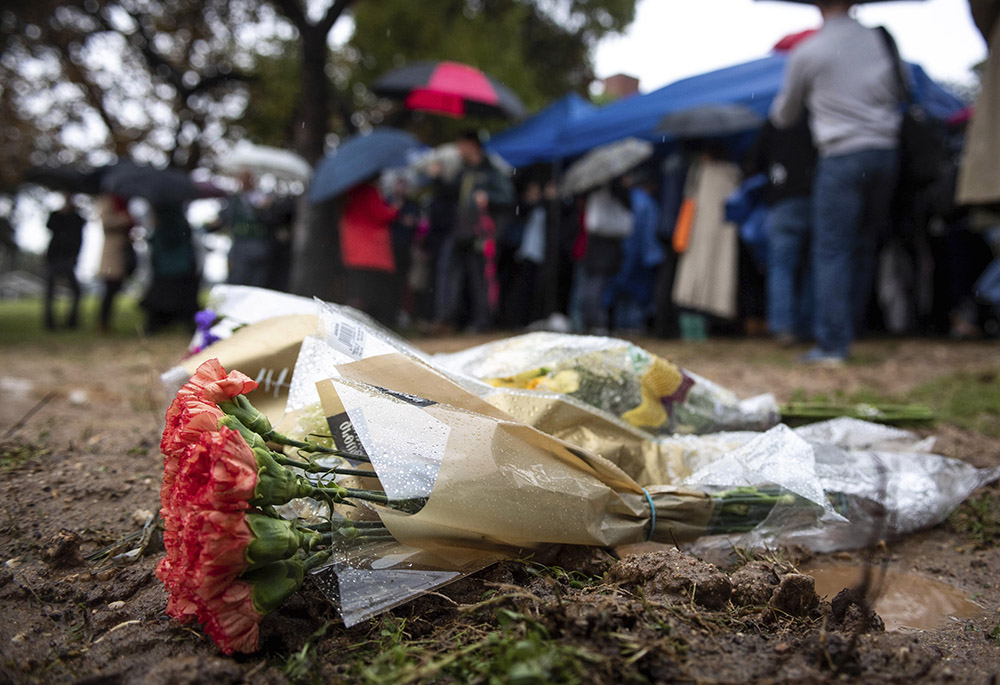 It was a brilliant late fall morning on which to bury 1,780 unclaimed remains of persons from around the lonely reaches of Los Angeles County.

A Gabrielino-Tongva holy woman lifted silver sage incense to the azure sky to bless the four corners of the single gravesite in a remote corner of Evergreen Cemetery in Boyle Heights. She then sang a traveling song "to help these souls make their journey." A rabbi intoned Kaddish in Hebrew. Prayers followed in Vietnamese, Ukrainian, Spanish and English. A male and female duo chanted "Dona Nobis Pacem" to end the 30-minute ceremony. Nearby traffic rushed down Lorena Street and MTA trains rumbled in and out of the First Street tunnel.

LA County has held an annual service called the Burial of the Unclaimed Dead since 1896. This year the forlorn, beautiful ceremony on Dec. 1 sought to comfort the spirits of the abandoned and to address a tangible failure: How could we as a society let such abandonment happen? But the service also provided a real-time response from the streets of Los Angeles to two timely themes in Catholicism in the United States. One theme is late-breaking: an increasing conservative Catholic skepticism about the use of the concept of human dignity in moral and political argument. The other theme is everlasting: the meaning of Christmas.

For years the ceremony was presided over only by a Protestant minister and the county coroner. But some 15 years ago Fr. Chris Ponnet, the chief Catholic chaplain at the sprawling LA County-University of Southern California Medical Center, began to imagine a more open, inclusive service.

"I couldn't understand why it was not more public," he said in a recent interview. After all, the dead may be unclaimed but in life they lived among us. Moreover, Ponnet said, he considered it an "emotional and spiritual assault even after death" for the diverse convictions of the spirits of the unclaimed to be greeted only by the prayers of a single Christian minister. "When people die," he said, "they continue … [their] dignity continues." Accordingly, in the last years he worked with the county to create a public service featuring a diversity of spiritual traditions that befit the diversity of the dead.

"Unclaimed" does not mean that the person in question is unknown. Fewer than a dozen of those buried at this year's service were not known by name. But all of the bodies went unclaimed for burial or cremation by family or friends. The county holds off on burial of unclaimed bodies for three years while social workers seek someone to take the remains (thus this year the cremated remains lie together under a tiny headstone with the inscription "2018").

There are twice as many men buried as women. There are nearly twice as many white persons as Blacks. There are also Native Americans, Asian Americans, Hawaiian-Pacific Islanders and hundreds of unknown ethnicities. There are children, immigrants and unhoused persons. "Almost all of them," LA County Supervisor Janice Hahn said at the service, "were poor."

The service at the LA gravesite occurred at a time of increased polarization among U.S. Catholics over many issues. One such point of difference is a dispute over the meaning of human dignity — a dispute with great consequences for how the church engages our culture.

Ponnet said of the service itself: "Dignity is at the core and center of it all." At the ceremony, Hahn said it was imperative to ensure that everyone in the county who passes away, no matter their means, "is treated with respect and dignity." Christina Gahly, director of LA County Health Services, said the service for the unclaimed was crucial to "give them dignity in their death and to recognize the value and dignity of their lives."

But such uses of the word "dignity" occurred against the backdrop of an increasing conservative criticism of the way the concept is deployed in moral and political argument. There are various aspects of this criticism.

One holds that dignity has become synonymous with the self-creative power of choice disposed in our secular culture to act in defiance of the "truth about the human person," in the phrase favored by John Paul II. So-called "gender ideology" (in which we make our gender whatever we want it to be) is Exhibit A of this problematic notion of dignity.

Another line of conservative criticism is libertarian and presumes an invulnerable self. For instance, Supreme Court Justice Clarence Thomas argued that dignity is an inalienable and unchangeable worth imparted to all as a result of being made in the image of God. For Thomas, it follows that our dignity is unaffected by any government action. In his noted dissent in the Obergefell v. Hodges decision, he said the dignity of slaves was unaffected by the laws that enslaved them and the dignity of gay and lesbian persons is unaffected by laws permitting gay marriage.

One other aspect of the contemporary criticism comes from the tradition of anti-liberalism. This view was expressed by philosopher Alasdair MacIntyre in a major address on Nov. 12 at the University of Notre Dame. For him, the word "dignity" is usually invoked in a pluralist society like ours to indicate an agreement on moral matters when no such agreement in fact exists. Instead, he argues that dignity does not refer to a notion of inherent worth but to the possibility of what we can become. In the social roles we each occupy, can we grow through the exercise of virtues in the knowledge and love of God? If we don't do that, we can lose our dignity. We can even become worse than beasts.

Dignity is inherent and inalienable: Who knows why each of the persons' bodies went unclaimed — poverty or contempt or indifference? But the spirit rebels at the thought that the body of such a person, however they have lived, should be laid to rest without the respect owed to the dignity of a person as such. No person's dignity can simply be identified with a capacity for choice and, once that capacity is gone, the dignity is gone, too. Moreover, no person, no matter what they've done, ever loses all claims to moral worth and becomes worse than a beast.

Dignity reflects our freedom: Ponnet spoke of this when he referred to the importance of not coercing the pluralist spirits of the unclaimed dead. We can also think of this aspect of dignity when we consider how many of the unclaimed were driven to lonely deaths around the county by the indignities of the oppressive power of caste. Dignity reflects freedom as we pursue truth, love and survival.

Dignity can be fulfilled or denied: It's a libertarian illusion to think that our dignity is inherent and nothing more. The 20th-century Catholic theologian Karl Rahner said that dignity was both gift and task: The gift is the inherent worth imparted to us by God's creative love and the task is our responsible freedom to seek our destiny in a world of redeeming grace. And that task can be fulfilled or denied. Thus we cannot help but think of the hidden destinies of the unclaimed dead. Did they fulfill the purpose of their pilgrimage on Earth? Or were those purposes proper to their dignity denied by the structures and cultures of our time?

Dignity demands recognition by community: "Dignity" is a boundary word, a visceral cry in the face of caste or contempt that says, "I belong!" Libertarians and antiseptic Thomists miss this: The former because they have an impoverished sense of community and the latter because their rationalist sense of community fails to account for radical vulnerability in the face of crushing power. At the ceremony, invocations of dignity hung in the air like a judgment over all of us: How did we so abjectly fail to recognize the dignity of each such person when they lived among us by right if not in fact as a full and equal member of our moral community?

In his famous fifth-century Christmas homily, Pope Leo the Great declared, "Christian, remember your dignity." The homily occurred against the backdrop of the powerful affirmation of the humanity of Jesus Christ at the Council of Chalcedon. I think our present moment requires reading Leo's homily in light of what always causes the most scandal at Christmas (hint: not saying "Happy Holidays"): that God, in a wild act of love, chose to inhabit the most abject places of human loss. So let us remember the dignity imparted by divine love to each unclaimed person buried near the rushing traffic on Lorena Street. And let us remember the task of our own dignity to seek the redemption of the principalities and powers that caused these 1,780 dignified persons to die unclaimed.