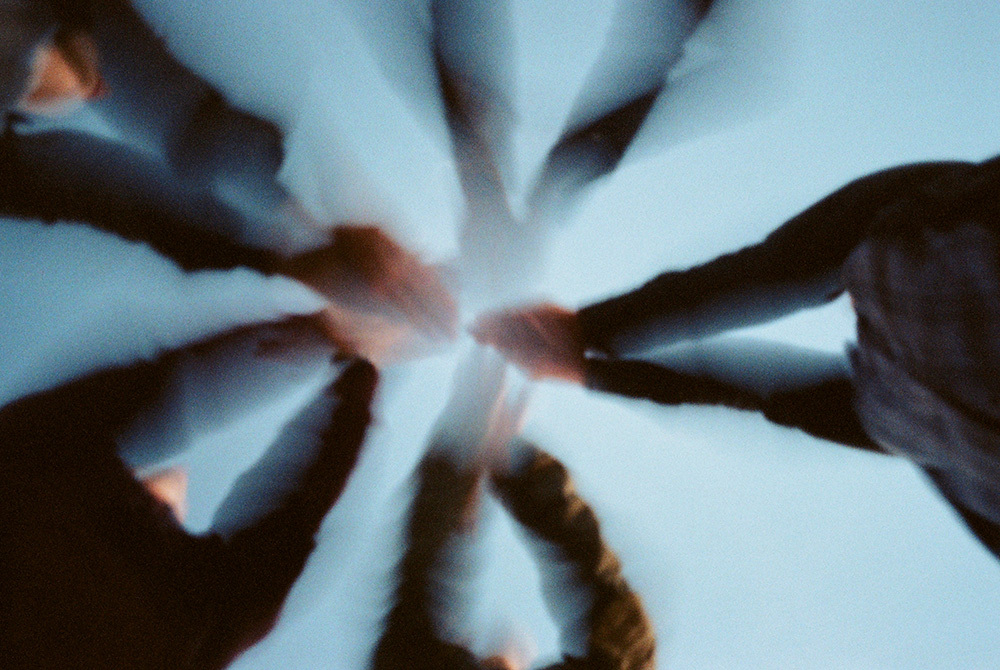 Production still from "The OA" (Courtesy of Netflix/Olivie Bee)

The past year all of us have watched, and re-watched, countless shows or movies, listened and re-listened to new and old artists. Yet each of us has that one piece of pop culture that became a kind of pandemic safety blanket. For me, it was sitcoms. I wanted to laugh at ridiculous white characters or situations and imagine, even for just 25 minutes, that I was in another world where people of color weren't dying. I watched "Schitt's Creek," "The Office" and "Broad City," yet none resonated as deeply as the Canadian series, "Letterkenny."

The series, which stars the show's creator Jared Keeso as Wayne, follows the lives of fictional Letterkenny's citizens. There is Katy, Wayne's sister; Squirrely Dan and Darryl; hockey players Riley and Jonesy; Gail, the owner of the bar, MoDean's, and all its subsequent iterations. The show centers First Nation members and offers insightful commentary on topics like consent, sexuality, drug addiction, religion, loneliness and love. I watched the series a year or two before the pandemic, but rewatched it during lockdown last year with my partner. In the context of the world we are now in, "Letterkenny" gave me hope and taught me about community and what it means to support those we love, inside and outside of our families.

And I am not the only one on staff who clung to pop culture this past year.

Here is "that one piece of pop culture" that spoke to various NCR staff.

Official video for "Stubborn Love" by The Lumineers, posted on their YouTube channel Feb. 8, 2013

When my neighbor asked me if I wanted to go to The Lumineers concert last February, I was so excited since, as a working mom, I didn't get out much. Little did I know it would be my last public event for a year or more. I don't know how those folks in 1918 did it; I don't think I could have survived this pandemic without movies, TV, podcasts, music and livestream events. I can mark the year by pop culture experiences: the Freddie Mercury tribute last spring, "Queen's Gambit" in fall and "Bridgerton" this winter. But throughout it all, I've returned to my favorite Lumineers songs: "Gloria," "Stubborn Love," "Cleopatra" and, of course, "Ho, Hey." I close my eyes and picture myself in the Allstate Arena in Rosemont, surrounded by nearly 20,000 other people singing, "I belong with you, you belong with me," and it reminds me that, even in quarantine, we're all in this together. 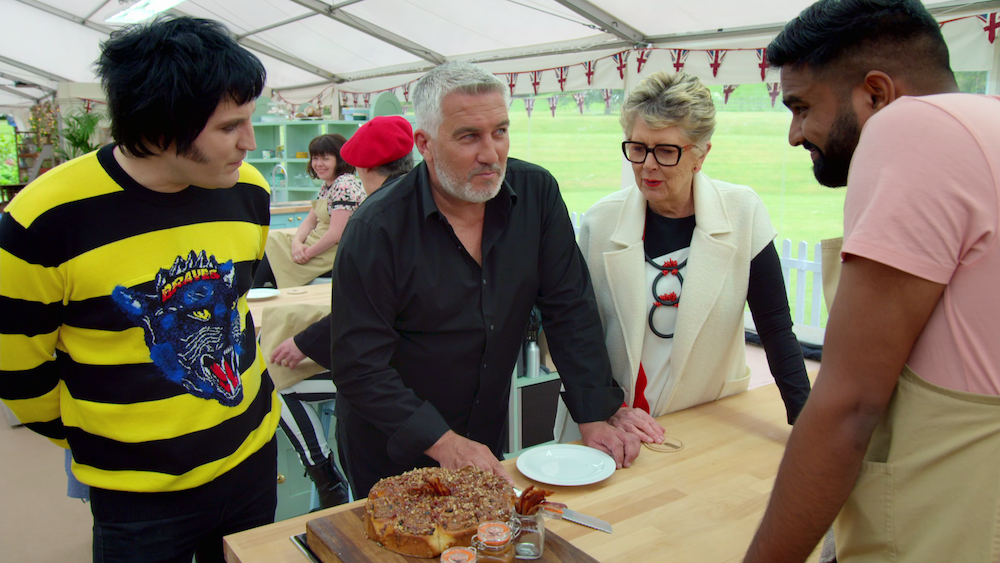 Ask most any mother where the magic of Christmas comes from in her household and she will likely wearily raise her hand. But this past holiday season, already worn out from months of a pandemic, working full-time at home with a 5-year-old doing virtual kindergarten, thinking about Christmas just made me cringe. A friend told me about "The Great British Baking Show," which has multiple seasons on Netflix. The baking competition features lovely British humor, soothing accents, and everyone is just so dang nice. In a world where it seems a lot of people have forgotten what it means to care for one another in the most basic of ways, watching these competitors cheer each other on, become life-long friends and bake delicious looking treats all at the same time was just what I needed.

Is it just me, or is primetime TV drama getting better? The pandemic has my wife and me watching more TV than before, virtually all of it courtesy of our DVR. "New Amsterdam" and "The Good Doctor" entertain us and teach us some things about the impact of pandemic on medical professionals as well as patients who could have been our friends and family. "This is Us" entertains us and teaches us some things about race. And when we want to escape to a different time and place, there are serials like "Deutschland '86," taking us back decades to our time living in Cold War Europe, and "Borgen," the Danish public TV show dramatizing that country's first woman prime minister. At least for us, TV in the pandemic has emerged as something quite a bit more valuable than a  "vast wasteland." 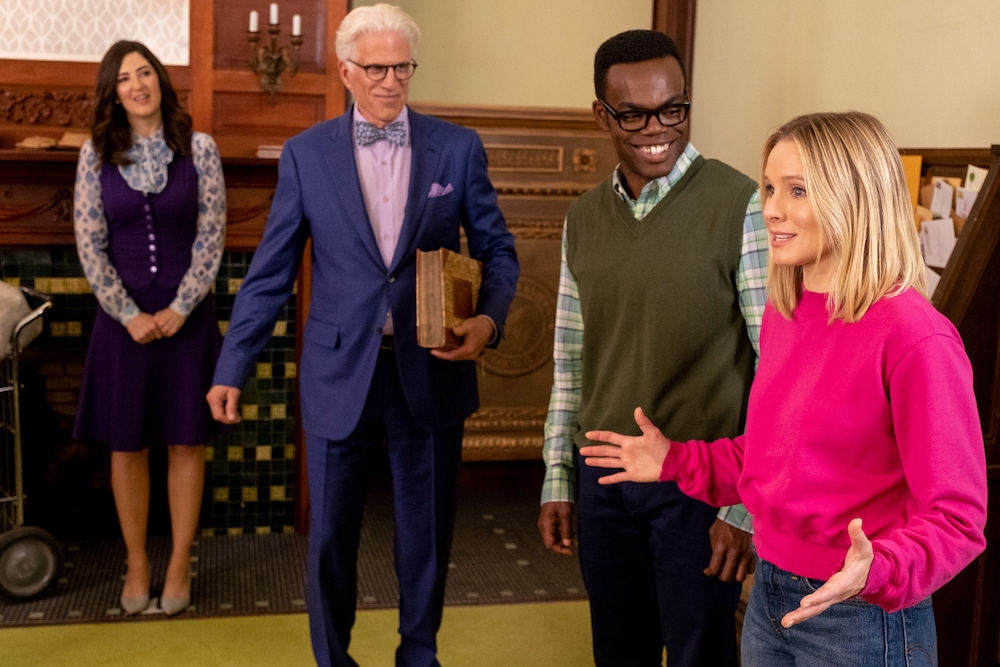 For a show that starts out so glib about death, "The Good Place" ultimately offers a surprisingly profound meditation on meaning and mortality. I introduced a friend in Cairo to the show during the pandemic, and we watched episodes together on Teleparty (a free google Chrome extension that lets people stream Netflix simultaneously). In a year that's been dominated by death and isolation, the lighthearted humor and lovable characters have been a real comfort. The show's ethical questions about our obligations to others — explored through the works of real philosophers — also feel particularly relevant amid fights over lockdowns, masks and vaccination. One final reason to watch is that "The Good Place" is truly plot-driven. If the jokes about Plato, Kierkegaard and Hume haven't hooked you by the end of the first season, the crazy twists will.

Back in the early weeks of sheltering in place, when we stretched our groceries to last us two weeks and rarely left our apartment, my husband introduced me to "The OA," a mind-bending show with elements of mystery, science fiction and the supernatural. I'd resisted before, but in April 2020, the timing was right. The show sucked me in with its strangeness and its willingness to explore bold questions: What would our world look like if we valued collective power? What could happen if we embraced the feminine to tell stories about issues like inequality, climate crisis and survival?

Netflix canceled "The OA" after just two seasons, although co-creators Brit Marling and Zal Batmanglij had plans for five seasons. Fans had clamored to bring it back, and watching it a year after it wrapped, I could identify. At a time when we felt trapped and helpless, "The OA" dared me to have hope about the future.

At the end of December, I, like many Spotify users, checked to see what were my top-played songs of 2020, the year of the pandemic. All my top-five's came from the same album — "Shore" by Fleet Foxes. The indie folk band's fourth album didn't debut until September, timed for the first day of fall, but its 15 soothing songs — which keeping in Fleet Foxes fashion sound straight from a forest jam band session — quickly became my go-to earworm when I needed to relax my mind. (Which, if Spotify is any indication, was a lot.) The opening track, "Wading In Waist-High Water," sets the tone, simulating with sound the feeling of gentle waves washing over you, a peaceful respite when quarantine life made a day on a real-life shore less possible.

Early in 2020, a friend and I had talked about going through the book The Artist's Way by Julia Cameron together. That would have been meeting in person in coffee shops, but then the pandemic hit. A switch to Zoom opened new possibilities, and since April 2020 we've been meeting virtually once a week with a second friend and my older sister, both in different cities. We've been going very slowly through the book, with lots of off-topic chitchat, and I don't know that I've made much progress artistically (and I've been terrible at keeping up with "morning pages"), but that's OK. It's been a great springboard for conversation and learning about each other. Above all, it's been important to keeping me in contact with other humans over the past year.

On the evening of March 17, 2020, I opened a bottle of wine and settled in for the first night of past performances that were being streamed by the Metropolitan Opera. Thousands of others had the same idea, and hundreds more were in the virtual "waiting room" for that broadcast of "La Boheme." In normal times, I find myself in a theatre or opera house almost weekly. Puccini's "La Boheme" isn't my favorite, but when Mimi sings of her desire for the arrival of spring in her first act aria, she seemed to sing for all of us. In the evenings ahead, I tuned in for broadcasts of Tosca (the first of many), Donizetti's Tudor Trilogy, and was later rebuked by a friend when I said I'd skipped Wagner's "Ring Cycle." Lest anyone think I'm all highbrow, I've binged watched my way through the tons of trashy television (ahem, "The Tiger King") and devoured new releases like "The Undoing" and "It's a Sin."

But looking back on the last year, I'm still right there with Mimi — waiting for the ground to thaw and for spring to finally arrive.

Before the pandemic, I do not ever recall getting lost on YouTube. I would occasionally find something on it that was interesting, or a friend would send a link to something on YouTube, and I would watch it and be done with it. But since the pandemic started, especially at the end of the week, I will find myself going to YouTube and entering "Montserrat Caballé" or "Broadway torch songs" and, no matter where you start, you can keep clicking on something from the right hand side and, pretty soon, you are watching an avalanche in Switzerland or the Prince of Denmark get toasted by his wife at his 50th birthday party or Cristiano Ronaldo scoring penalty kicks or how to cook mustard chicken with the Barefoot Contessa! It is a little like playing cards in that you can pay attention to it, or not. It is funny, informative or sad. It is highly addictive.

Final scene/tableau from Act II of Puccini's "La Bohème" posted on the Metropolitan Opera's YouTube channel Jan. 17, 2018, from the 2014 Live in HD transmission, conducted by Stefano Ranzani and produced by Franco Zeffirelli