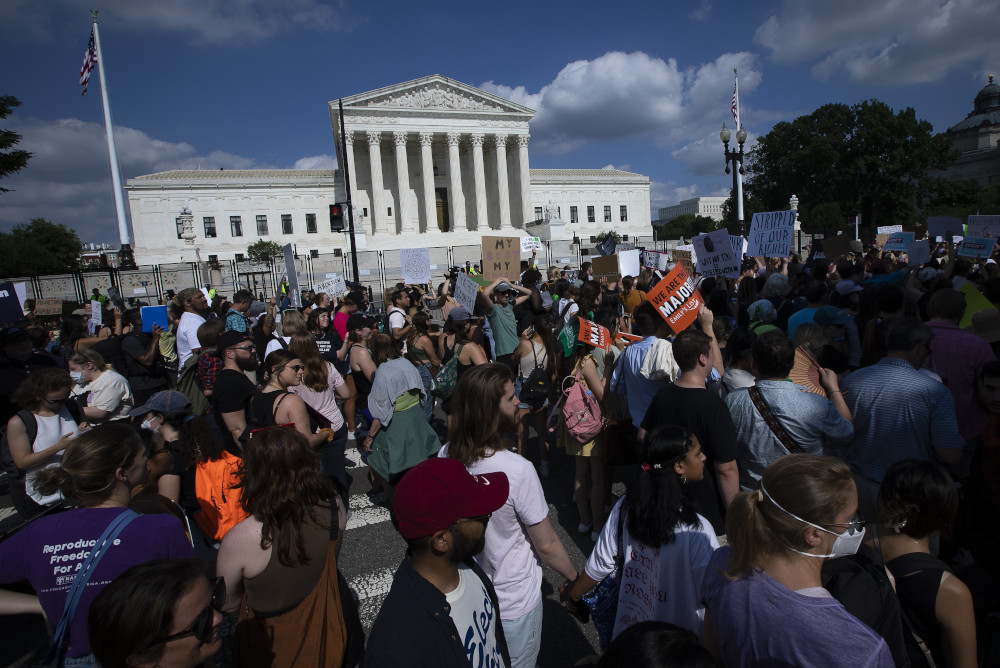 Abortion demonstrators are seen near the Supreme Court in Washington June 24 as the court overruled the landmark Roe v. Wade abortion decision in its ruling in the Dobbs case on a Mississippi law banning most abortions after 15 weeks. (CNS/Tyler Orsburn)

It is done. The decision by the U.S. Supreme Court in Dobbs v. Jackson Women's Health Organization overturned Roe v. Wade, ending 50 years in which abortion has been a constitutional right.

Now Catholic and evangelical Christian leaders need to acknowledge the costs of their victory. The most visible is nearly a half-century of being in bed with the Republican Party, and most recently its leader Donald Trump, a man of low morals willing to lie, cheat and, to hear the January 6 committee tell it, break the law in order to stay in office.

It also meant becoming a single-issue constituency who sacrificed nearly every social justice issue to create a Supreme Court that would reverse Roe v. Wade.

That court also killed state gun licensing laws in New York and other states, is making it more difficult for the executive branch to approve regulations that would protect public health and the environment and enable the United States to meet its commitments on reducing carbon emissions and other greenhouse gases.

Yes, the Republicans finally delivered on their promise to reverse Roe, but in every other way it is making the world less hospitable to life. To call this pro-life is absurd.

The anti-abortion coalition's cohabitation with the GOP may have been a pragmatic move, but it remains to be seen what will be the practical effect. Consider: How many abortions will actually be avoided once the dust settles?

People in states where abortion is outlawed can still travel to states where it is legal or they will use abortion pills at home in the first 10 weeks of pregnancy. Even before Dobbs, more than half of abortions were brought on by pills. Anyone who thinks such pills can be stopped at a state or even an international border has not been paying attention to the failed attempts to control illicit drug use in this country.

The real winner of the abortion fight is corporate America, which installed friendly justices onto the court while the religious right got the press for it. This court will stand in the way of progressive laws and regulations just as an earlier court stood against the New Deal.

In short, stuffing the U.S. Supreme Court with conservative justices has set the stage for a string of victories for corporations that do not want the government telling them what to do. Regulations governing fossil fuels, pharmaceuticals, food safety, energy conservation, civil rights, public health and every other aspect of life will be more easily challenged by corporate lawyers with this court.

In Catholic teaching, being pro-life is not just about abortion. Being pro-life means concern about all life, from the womb to the tomb. Now that the bishops and other anti-abortion Catholics have won their fight against Roe, will they embrace a more consistent ethic of life? Will they live up to the extensive social justice agenda they espouse on paper?

Will they reach out to Democrats who opposed them on abortion but support social programs — health care, housing, food assistance, jobs, daycare — to help mothers care for their children?

Will Democrats, angry about their defeat on abortion, be willing to partner with those who have a wider pro-life agenda?