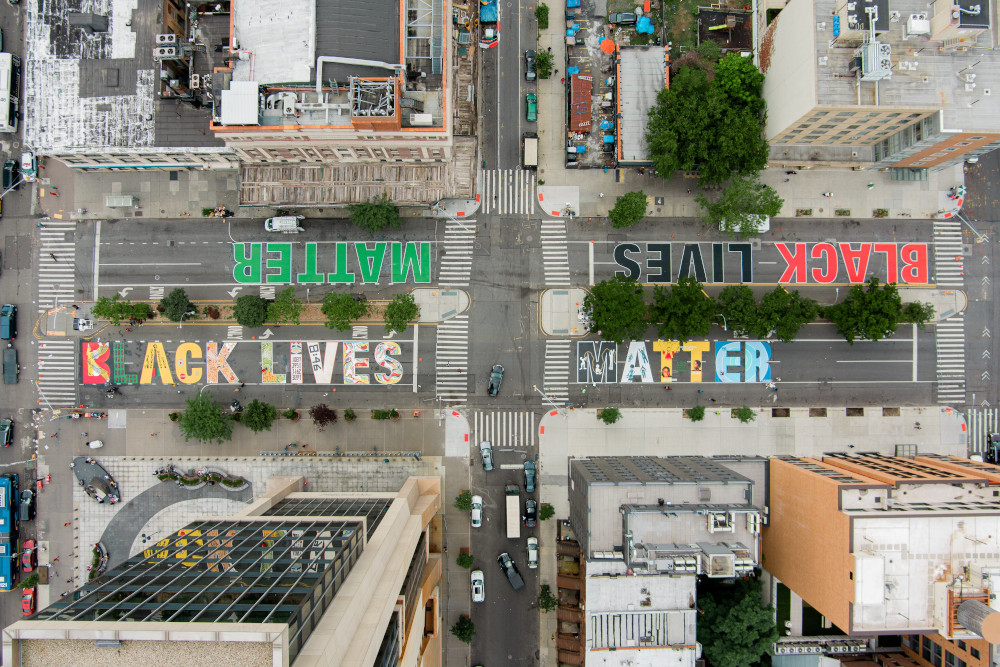 An aerial view of a "Black Lives Matter" mural is seen in the Harlem neighborhood of New York City July 7, 2020. (CNS/Reuters/Alon Sicherman)

In the 1970s, El Salvador was controlled by Gen. Carlos Humberto Romero whose disregard for the poor was unconscionable. Thankfully, his grip on power could not protect him from staunch resistance by the clergy, religious and every day citizens.

During that time, Archbishop Óscar Romero, now a saint, was widely regarded as a conservative bishop who was initially neutral in the early 1970s, before Humberto Romero was elected president in 1977. But Romero was soon transformed. Starting in 1974, serving as a rural diocese bishop, he learned of injustices against farmworkers. In 1977, his close friend, Jesuit priest and saint Rutilio Grande, was murdered by El Salvadorian authorities.

Grande's zeal for social and spiritual liberation, and Romero's own experience, transformed his ethical ambivalence into righteous indignation. From then on, Romero emphatically proclaimed that the church's utmost responsibility was to the poor and marginalized.

While Romero was steadfast in his resistance, he would eventually pay the ultimate price. On March 24, 1980, he was shot and killed in the middle of saying Mass.

Forty years later, on May 23, 2020, in Minneapolis, Minnesota, George Floyd was purchasing cigarettes at a local grocery store. An employee suspected the $20 bill was counterfeit, and the manager told another employee to call the police.

As Floyd sat in a car outside, two police officers approached him and put him in handcuffs. This quickly accelerated to a hostile encounter and ended in Minneapolis police officer Derek Chauvin planting his knee on Floyd's neck, choking him to death. Hours later, protestors filled the streets agitating for change.

This outburst of emotion was fairly noble, but ironically grotesque. There seemed to be no commotion outside of the Black community when Trayvon Martin's killer, George Zimmerman, was acquitted of murder. The childlike innocence of Martin did not motivate our country's conscience. Rather, many viewed the phrase "Black Lives Matter" as an effort to divide our already fragile country. 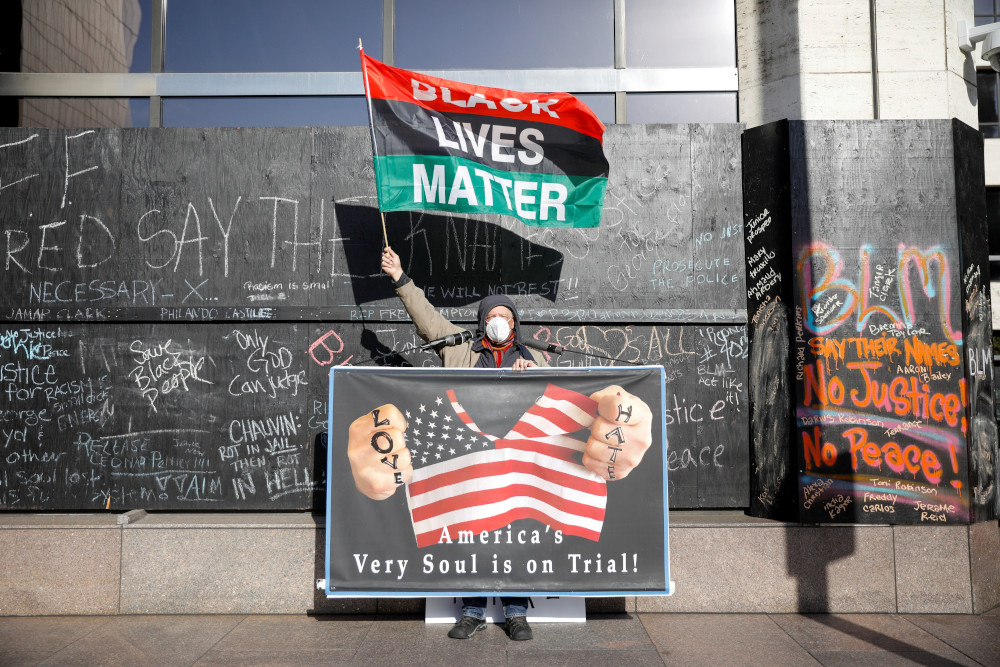 A demonstrator holds a "Black Lives Matter" flag and another sign outside the Hennepin County Government Center in Minneapolis April 6, 2021, the seventh day of the trial of former police officer Derek Chauvin. Chauvin was on trial for second-degree murder, third-degree murder and second-degree manslaughter in the May 25, 2020, death of George Floyd. (CNS/Reuters/Nicholas Pfosi)

Amidst all the uproar, the American Catholic Church, like Romero initially did, took the route of neutrality. For many, Black Lives Matter was a political matter rather than an affirmation of human dignity. The hesitancy to fully embrace this phrase comes from the successful culture wars waged by right-wing politicians linking social justice initiatives to destruction of American society.

While the Soviet Union committed heinous acts against millions of people, most civil right leaders, from Malcolm X to Angela Davis, engaged in staunch anti-capitalist politics because the foundations of capitalism were built on white supremacy.

Most high functioning capitalist countries like Denmark, Sweden, Finland and Norway provide free education and health care for their citizens. These aren't socialist ideologies. Rather, they are initiatives to improve the lives of people in their countries.

It would be naive to not acknowledge that Black, Indigenous and people of color and/or the working class have been disregarded by both sides of the American political sphere.

Virtue signaling does little to improve the material conditions of those most marginalized in society. It would be naive to not acknowledge that Black, Indigenous and people of color and/or the working class have been disregarded by both sides of the American political sphere.

As Romero said during Grande's funeral, "the Christian religion is not one-dimensional, spiritualistic, unmindful of the misery that surrounds them. Rather, our religion beholds God and from the perspective of God sees the neighbor as brother or sister."

While the church is known for its numerous charities in marginalized communities, there seems to be a massive disconnect between the religious and church hierarchy. Many bishops guide the flock in areas affected by poverty and institutionalized racism, many of which have endured police brutality and state-sanctioned killings. Yet, the bishops' ability to communicate with alt-right commentators but not with various organizers is morally reprehensible.

In a broader sense, it seems that a large swath of the church has willfully ignored the vibrant history of Black clergy members and religious who have been ardent supporters of Black liberation. After the assassination of Martin Luther King Jr., numerous clergy members gathered together to assess the church's past role in white supremacy but also prospective part in Black liberation. 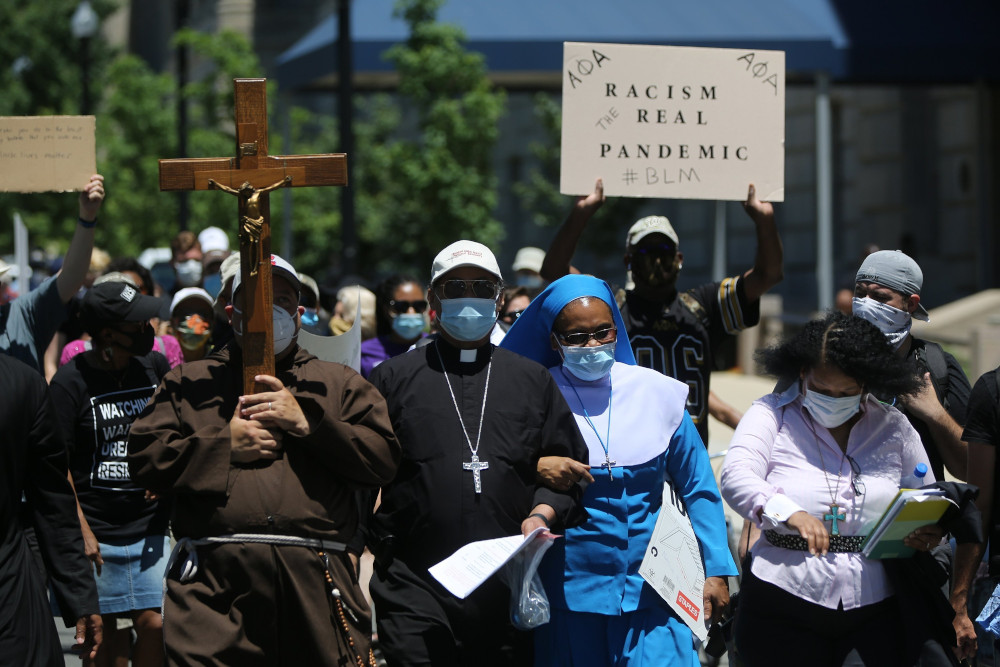 Washington Auxiliary Bishop Roy Campbell and a woman religious walk with others toward the National Museum of African American History and Culture in Washington during an anti-racism protest June 8, 2020. (CNS/Bob Roller)

According to the Smithsonian Magazine, those priests and religious vigorously stated that "unless the Church, by an immediate, effective and total reversing of its present practices, rejects and denounces all forms of racism within its ranks and institutions and in the society of which she is a part, she will become unacceptable in the black community."

Black Lives Matter and the movements spurned from it have created an instrumental amount of momentum in our current political era. Politicians like Joe Biden and Nancy Pelosi who were once gleeful architects of mass incarceration are now filled with performative remorse.

Does that give me a sense of optimism? Sadly, no. For numerous politicians, the phrase "Black Lives Matter" is not a call to action; it's more like a diversity quota. These words will never motivate them to reimagine their own politics.

On a spiritual front, progress towards racial and economic justice has been abysmal. There seems to be little to no understanding displayed by numerous members of church hierarchy, clergy and laity.

Regardless of the past efforts which have been met with scorn, I do have a semblance of Christian hope, that hearts made of stone will come to life. Like Romero demonstrated, conversion is not impossible, but unfortunately the murder of an unarmed Black man on camera, has yet to facilitate our moral consciousness.

A version of this story appeared in the Aug 19-Sept 1, 2022 print issue under the headline: What Óscar Romero can teach us about Black Lives Matter.