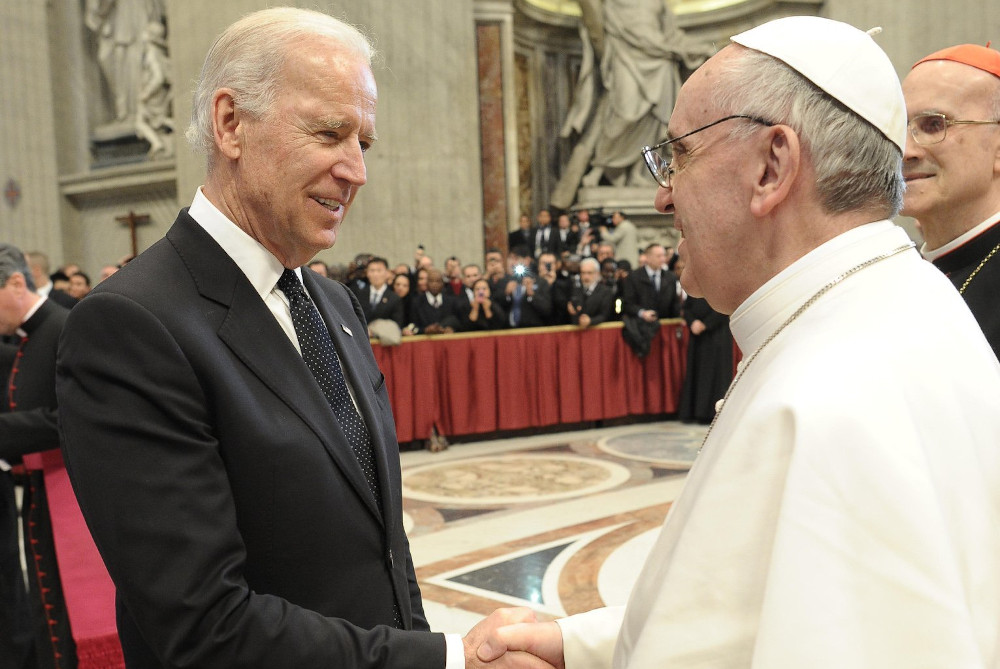 When Pope Francis meets with President Joe Biden in Rome on Oct. 29, this will not be a pastoral meeting between the pope and one of the Catholic faithful. This is a meeting between Biden as the president of the United States and the pope, who is an influential world leader.

One thing they will not be talking about is whether Catholic pro-choice Biden can go to Communion. That is a conversation Biden would have with his local bishop, Cardinal Wilton Gregory, archbishop of Washington. Francis has already indicated he has not denied Communion to anyone.

When presidents meet popes, they talk about world events, not their personal faith. Every president since Dwight Eisenhower has met with a pope, some multiple times. And, while presidents meet with popes, White House and State Department officials meet with their Vatican counterparts.

Read this next: How does a meeting between a pope and president happen?

The main topic of Friday's visit will be the upcoming climate meeting in Glasgow, Scotland. Other topics might include COVID-19, the refugee crisis, the anarchy in Haiti, the civil conflict in Lebanon, the problems of the Middle East and whatever world crises are on the front pages this week.

Because conflict sells newspapers and gets internet views, reporters will play up any sign of conflict at the meeting, but no one in the White House or the Vatican is looking for a fight. After centuries of diplomatic encounters, the Vatican understands the importance of focusing on areas where it can work with governments to improve the common good.

Lacking military and economic power, the Vatican avoids confrontation. Even with governments like China where it has serious problems, the strategy is to work for incremental improvements rather than risk a public brawl. Although armchair commentators urge popes to denounce violations of religious freedom, the Vatican knows that after the headlines fade, it will still have to deal with the country it has antagonized.

Because conflict sells newspapers and gets internet views, reporters will play up any sign of conflict at the meeting, but no one in the White House or the Vatican is looking for a fight.

The White House sees in the pope an ally on the world stage, although the pope is probably closer to Bernie Sanders than Biden on economic issues. I am sure some in the White House would love to ask the pope to lobby Sen. Joe Manchin, a Catholic, on climate change, but that is not going to happen. Popes do not lobby legislators. Sadly, the U.S. bishops are mostly silent on global warming.

No one else will be in the room when the president and the pope meet, except perhaps a translator. Afterward, the Vatican media office will issue a short press release listing some of the topics discussed. The press release can be rather opaque because it does not indicate areas of agreement or disagreement. Nor does it indicate how much time was spent on each topic.

At one meeting in the Vatican with a Democratic secretary of state, most of the time was spent discussing the Middle East, but as people were getting up to leave, a Vatican official said to the American delegation, "Of course, we will have to say something about abortion in the press release." One sentence on abortion in the press release became the focus of media attention even though it only consumed a couple of minutes in the meeting.

What cannot be hidden, however, is the photo op after the meeting of the president and the pope. Pius XII never smiled in such photos with world leaders. Later popes were not so disciplined. Francis does not hide his feelings. If you want to know how the meeting went, compare the pictures of Francis with Biden after the meeting with those of Francis and Donald Trump after their meeting. A picture is worth a thousand words.

Read this next: When Biden meets with Francis, some heads will explode