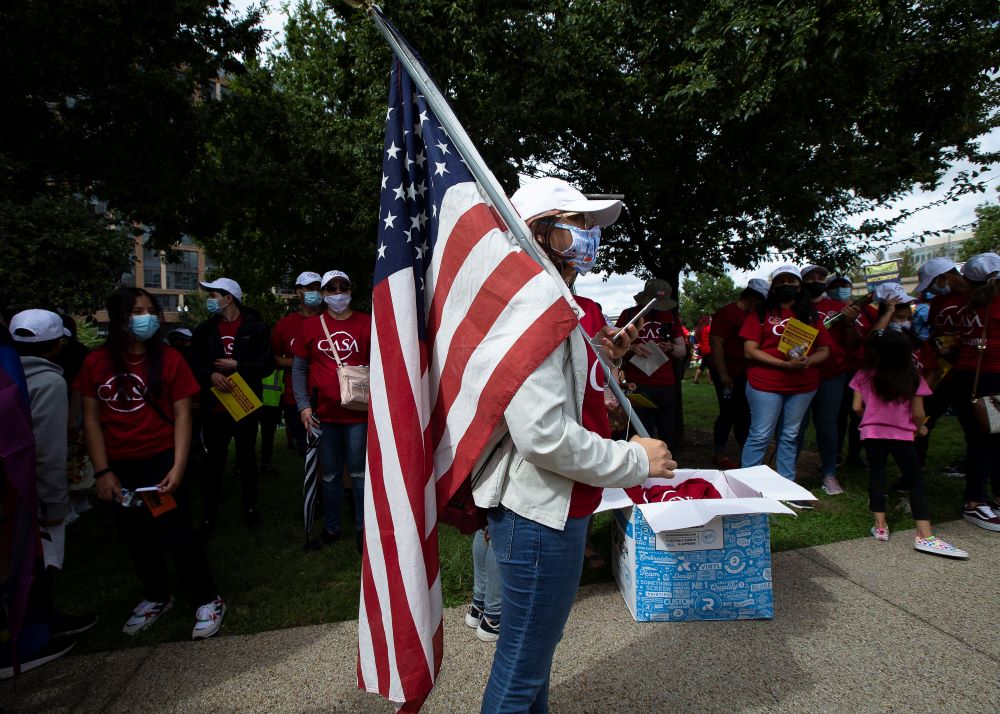 Migrant families and immigration advocates in Washington call for a pathway toward U.S. citizenship as they gather near Benjamin Banneker Park to march toward the U.S. Immigration and Customs Enforcement building Sept. 21. (CNS/Tyler Orsburn)

Last week, President Joe Biden conceded that his sweeping, $2.2 trillion social and climate spending Build Back Better Act had stalled in the Senate. The BBB would provide much-needed funding for caregiving for children and the elderly, combating climate change, making health care more affordable, and bringing down costs that would strengthen the middle class. As part of this last objective, the bill includes a provision making a small change to current immigration law.

Including the immigration provision in the bill has been a rollercoaster, as is everything immigration related. Democrats have been going back and forth on whether to include a pathway to citizenship or reduce the relief down to something known as immigration parole. The U.S. Senate parliamentarian has claimed immigration relief does not belong in a reconciliation bill; advocates have called for overruling the parliamentarian as she has shown she does not understand the economic benefit of immigration.

With West Virginia Senator Joe Manchin now declaring he won't support the Build Back Better Act at all, the conversation is stalled not only for immigrants, but for everyone else as well. Whether Manchin is serious or whether he is just looking for leverage to negotiate his version of the bill remains to be seen.

No matter what happens to BBB, whether a smaller bill is negotiated or whether legislation is passed piecemeal, a pathway to citizenship for long-term undocumented immigrants must be made a reality — no matter what it takes.

I am one of a handful of fully undocumented attorneys in the country. As such, I'm in a unique position to understand the consequences of not prioritizing a pathway to citizenship, consequences not only in my clients' lives, but in my own.

Long-term undocumented immigrants have been waiting for immigration relief for decades, while contributing billions of tax dollars at the federal, state and local level. The IRS estimates that undocumented immigrants pay over $9 billion or more annually in withheld payroll taxes alone, making Social Security more solvent by paying into the system, even though we cannot get benefits upon retiring — subsidizing everyone else's benefits. In addition to payroll taxes, we pay sales tax, property tax and other kinds of taxes, an estimated $23.6 billion in state, federal and local taxes.

Despite all our contributions, we are called "wetbacks," "illegals," "aliens" and, in the most current line of abusive name-calling, "rapists" and "criminals." Our suffering is used by politicians as leverage to negotiate, and any discussion of legalization is seen as a show of benevolence and a form of charity. Many politicians in the past have been unwilling to fight for us because they see immigration relief as a "handout," when the truth is, we have earned our right to be here, permanently, a hundred times over.

The challenges faced by long-term undocumented immigrants have been exacerbated by the COVID pandemic and by our current political climate. Living undocumented means being limited to the kinds of jobs we can do, being targets of abusive employers, not being able to fully trust the police to report crime, having family members pass away in our home countries and not being able to go and say goodbye, listening to racist rhetoric while bowing our heads.

On January 20, 2021, Tony Bernabe, a longtime immigrant rights organizer with the Coalition for Humane Immigrant Rights (CHIRLA), passed away. Bernabe fought for immigrant rights for more than two decades, during which multiple attempts at immigration reform failed because of politicians breaking promises, lacking the will to fight. Bernabe died without seeing his dream come true, as have many others.

I have seen another worrying trend. Many of my clients, now in their 70s, ask how, if at all, they can collect any benefits from all the money they have contributed to social programs over the years. Many of them worked hard for decades to have a better life and have contributed for decades to social programs. Because they lack legal status, they never had jobs that offered retirement programs and now, in their vulnerable elderly years, they are left with no recourse to retire or to recover some of what they have contributed.

Permanent immigration relief is overdue. A pathway to citizenship could be offered through a very simple and minor change in an already existing program known as registry, which would allow long-term undocumented immigrants to register for legal permanent residency. Registry has existed since 1929 and the only change needed would be to change the required entry date, it is as simple as that. Whether included in the BBB or passed as a standalone bill, a pathway to citizenship is an investment in the right direction.

Senate parliamentarian Elizabeth MacDonough has said that "[t]he change in status to LPR [lawful permanent residency] remains a life-long change in circumstances the value of which vastly outweighs its budgetary impact," but I dare to disagree. Not only would each eligible immigrant have to pay the filing fee to adjust their status — which is currently $1,140 plus $85 for biometrics, a fee subject to change — but many of us have already been contributing and making the budget a robust budget for decades, and will continue to make it even more robust once we finally are able to come out of the shadows.

The truth is, every policy in the Build Back Better Act would mean a lifelong change in circumstances to Americans, the value of which also vastly outweighs budgetary impact. That is a good thing: What are taxes and the budget for, if not to improve the lives of taxpayers? The question is not about the value of the policy, but a question of will and a question of awareness. Do politicians have the will, the backbone, to fight for long-term undocumented immigrants? Do politicians have the awareness of our multibillion-dollar budget impact? Do they value our impact, or do they think giving permanent residency is a form of charity or a handout?

A version of this story appeared in the Jan 7-20, 2022 print issue under the headline: Build Back Better plan must help undocumented.