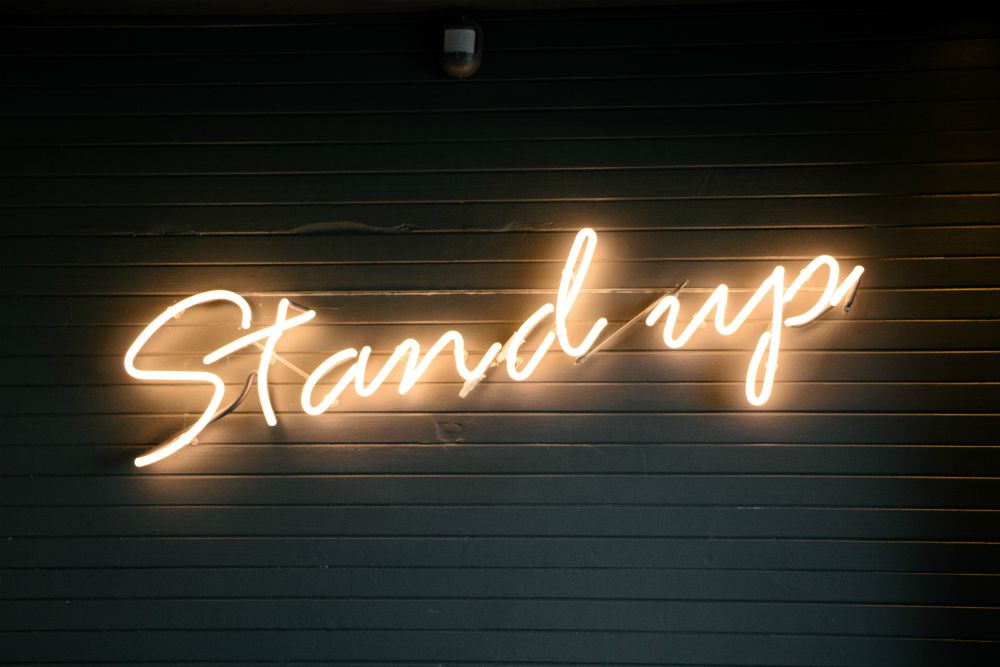 I know, I know: "All things in moderation." I grew up with that little piece of wisdom, too. Having said that, I also have to point to the confusion I felt when I read Jesus' response to it: "If you be neither hot nor cold, I will spit you out of my mouth" (Revelations 3:16).

The translation of that, for those who can possibly wonder, is "Stand up." Stand for something. Stand up and take a position. Loudly, if necessary. Don't just wait to see how things come out. Add to the conversation. Add to the wisdom. Add to the questions that surround it. Add the ideas you've learned somewhere else so that others can mull them over, too. And whatever you do, don't, as the Irish say, "Fall between two stools."

The trouble is that we have whole audiences caught between stools right now. They're confused about which side to sit on. They're uncertain about what position to take, so they step back and let someone else do their thinking for them.

Members of Congress who swallow their consciences to please the system rather than the Gospel are not going to stand for anything. Surely the wealthy who vote for their stock returns and their tax reductions rather than for the upbuilding of the needs of the entire nation are not going to worry about little things ― like somebody else's poverty. And without doubt, average persons who can't tell the political lies from the truth anymore may know what's right in their hearts but have no idea what happened to the congressional process that once decided those things together.

So inured are we to alternative facts, competing values, unclear constitutional interpretations, and the difference between national laws and, well, the rise of an imperial presidency, it's impossible to know who knows what. When a "royal presidency" ― an oxymoron in itself, like bittersweet or open secrets or living deaths ― suddenly outranks any other law-making force in the country, the people who've been lied to quit believing in facts all together. Now "facts" are just one more movable feast.

"They all lie," people say of politicians and national agencies and the media and even of the scientists they've been taught to doubt so that corporations don't have to make any ecological changes to their products or processes. Indeed, the people have been taught to doubt, so now government and science are begging us to save ourselves because it is already too late to debate climate change. But how can we save anything while we keep rolling back ecological regulations for the sake of short-term corporate profiteering?

How is a nation supposed to trust anyone or any laws at all when the president himself, having declared himself above it, simply deals with the law by refusing to keep it, to honor it, to submit to its review and validation?

In the face of that kind of reasoning, tell your teenager that we're a country of laws and hear the laughter in the background. Only this time, it's at you.

In a world such as that, maybe it's just better to keep your head down, many think, and follow the herd rather than risk attention, or worse, risk public disapproval. Do little and say nothing at all has become the new definition of peace and security in a land of political turmoil and working families living in tent cities due to the lack of a decent minimum wage and to the disappearance of low-cost housing. This, while at the same time, they tell us the economy is soaring for some while we're spending money building walls instead of raising the minimum wage to a living wage.

I give up: Where's the moderation? In fact, is moderation moral when topics such as those aren't even being discussed and debated in the highest level in government?

So much for democracy. We've seen democracies destroyed. But it is just as possible to simply let ours die on the vine from the plague of federal indifference.

In a between-the-stools population and political system, being neither hot nor cold has become a fine art. It has its own set of norms, of course: As in, "Say nothing about what you don't like. Be silent and hope this awful nightmare finally ends. Move over and make room for the white nationalists, the racists, the automatic rifles, the new elected monarchy." After all, "there were very fine people on both sides," right?

The problem? The whole scene has the tone of "The Handmaid's Tale." Everybody's lined up, smiling a pasted-down smile, sure that the world can be saved despite the fact that few are saying anything to save it. Like demand gun laws. Like rejoin the Paris climate agreement. Like stop the tariff war. Like impose ecological regulations immediately before the next city is underwater and the poor have no water at all.

No, moderation won't do it. What we need now is Christian extremism, the idea that there are some things that cannot be tolerated in life, that there is something we can do to resolve these logjams if we really want to do it.

These are the people who are "either hot or cold." And Jesus loves them.

Christian extremism is extremely concerned about what this era of insult and mockery has sown. We need people who don't change TV news channels because the news "depresses" them. Instead they listen carefully to understand what needs to be done and they join mixed groups to start doing it. Locally as well as globally.

Christian extremists are extremely open to new ideas. They read good articles carefully. They call for the creation of mixed groups to consider what can be done about issues on a local level. They find out from local officials what can be done to control guns, for instance, and provide medical care, and start subsidized housing, and invest in ecological preservation. They take part in democracy, in other words, as any citizen who wants to keep it must do.

Real Christian extremists are prepared to develop and attend educational sessions in order to educate themselves on all parts of an issue. Then they can help others to understand. Most of all, they can do it without ridiculing people whose approach to the question is different from their own. Their goal is to participate in the discussion, to move the question to a higher level, if possible, where public action is expected to be done. They are not out to declare war on anyone.

Christian extremists expect extremely detailed reports from civil servants, both local and national. Most of all, they prompt their own groups to sponsor such sessions with elected representatives. They become part of groups whose goal is to acquaint people with the effects of various proposals on every separate level of society.

Christian extremists take the separation of powers in the U.S. Constitution seriously, jealously, whole heartedly. They refuse to be silent in the face of its ambush. congresspersons and senators who announce their positions before the materials in question are even amassed do the country a great disservice. They are not representatives; they are just one more kind of hijacker trying to maintain power for personal gain rather than use it for the sake of the common good.

From where I stand, partisanship is simply one more word for power grab and the fading of democracy. If it's not stopped in its tracks soon, there will be nothing left of the glory of this country than the divisions of rich and poor, weak and powerful, upper class and lower class ― conquerors and conquered. And that, history knows, will be a most extreme mistake.