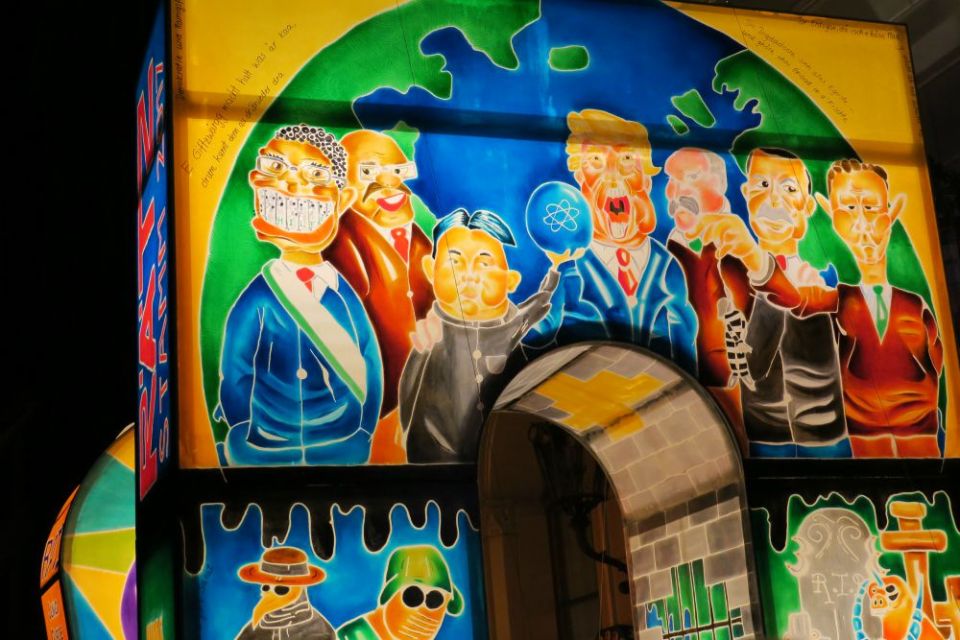 There's been a lot of foot-stomping and harrumphing going on in Washington, D.C., in the last several weeks. First, someone walked out of a meeting about … oh, yes, almost forgot … the future of the United States. Then, people began barricading themselves in their offices and having no meetings at all. Finally, the old game of attention-getting began, as in who can commit the most ridiculous behavior today in order to make people forget yesterday's even more ridiculous behavior. This time it's the threat of "a national emergency" to save us from all the sick children, penniless women and jobless men trying to become hard-working citizens of the United States just like our ancestors before them.

All in all, Washington has become a B-level soap opera, except that the speeches are boring and the high-level name-calling is getting dull. It could all be funny if it weren't so destructive. As it is, it's a danger to American democracy, a danger to the future of the country, and a danger to the family of nations, as well.

Interestingly enough, it was precisely in an equally inane environment like this one that Benedict of Norcia in sixth-century Italy designed a rule of life, which, historians tell us, saved Western civilization by renewing its sense of spiritual values, restoring social order and raising the level of culture throughout Europe.

Related: How to save Western civilization — again

The first of Benedict's 12 principles of humility, for instance, turns both religion and government upside down. The first degree of humility, he teaches, is that we "keep the reverence of God always before our eyes and never forget it."

Religion, of course, presents God as something to be "merited" — won, achieved by keeping all the rules. This is exactly why people feel like religious failures: Perfection is not a human thing. Nobody keeps all the rules all the time, let alone perfectly. But by making consciousness of the will of God his first principle of humility, Benedict makes it clear that we don't have to earn God because we already have God. All we really need to do is to grow into the consciousness that God is already with us and so realize that God's will for the world must be our will, too. And we must not "forget it."

This is where government also comes in: Instead of keeping the reverence of God always before our eyes, all we can see and hear these days is Donald Trump and what he intends to do in his own name for his own fame. And yet, the first principle of humility is that God is God and we are not. None of us. No president, no king, no dictator, no authoritarian. No "strong man" doing his own will in the name of the people and sucking up all the television time and internet the world has to give him

In the face of such arrogance, such narcissism, such dominance, Benedict taught people to remember the pre-eminence of God. "Revere God," he taught, rather than aggrandize the self. "Remember that God is God," he taught, and we are not.

The teaching is a simple but overwhelming one. Just think of it: If we really remember that God created us, that God gives us the world in order to complete God's image for creation, then all the personal grandstanding is for nothing: "I'm the greatest!" No, actually you are not. "I'm the only one who can solve this?" Not on your life. "I'm the first, the best, the greatest, the only one who knows the answers." Not at all. Or, "These other people are not like us; they are our evil enemies, they are beneath us, a danger to us, rapists, thieves, murderers." Or to say it all better, clearer, in shorthand: They are not dominant, powerful, nuclear-armed, white males. Otherwise we would be as concerned about the well-being of their children as we are of ours.

From where I stand, only this first degree of humility — the recognition that we have no claim on Godness— can save us from ourselves. In fact, on Jan. 25 some of Europe's most prominent intellectuals signed and published a "pro-European manifesto" that warns that "Europe is in peril" from "populist forces" — "false prophets" — that now threaten democracy everywhere. Nor should we forget that Pope Benedict XVI took as the central concern of his papacy "the re-evangelization of Europe," the recall of Europe to the very spiritual values, social order and quality of culture that Benedict of Norcia had bequeathed it centuries ago. And now we are face to face with it ourselves. It is a surely a moment to rethink our own slip into self-aggrandizement and political narcissism, to decide if we would rather live in a world of equals or a world of sycophants and slaves of the powerful few.

Instead, we must be open to learning from one another, supporting one another, integrating all, and work together as peoples, not as imperial populists who get power by stirring up fear, any fear as long as we're afraid of it. Only commitment to the will of God for all can bring this world, this country — any country — back to a state of national greatness, global glory and humane humanity.

We must refuse our claim to Godliness. First we must model humility, civility, respect with one another, then we must model it in our politics, and, finally, we must give up our illusions of superiority, sexism, patriarchy and racism. Then, all of us together, must bow down before the God who made us — all of us in God's image, yes, but not one of us as God's ultimate likeness.

A version of this story appeared in the March 22-April 4, 2019 print issue under the headline: Fixing everything: First, let God be God .

Hobson's choice or a new beginning