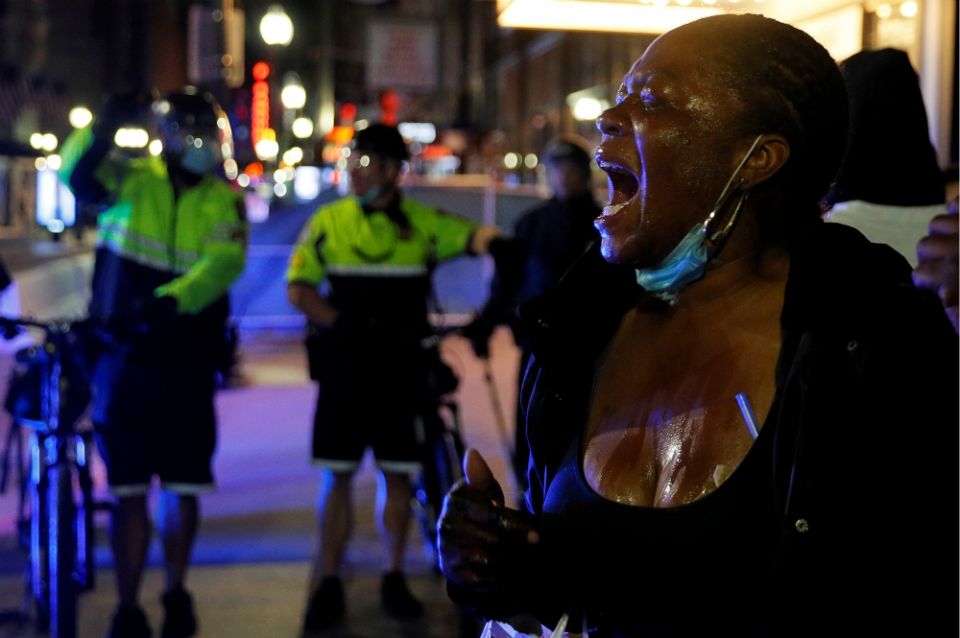 A protester in Boston screams after being affected by a chemical agent used by metro police May 31. (CNS/Reuters/Brian Snyder)

Thirty cities, they say. Thirty cities. Thirty cities burned from coast to coast. You can hear the tsk-tsking everywhere. You can see the heads shaking with disgust, with frustration, with deep disapproval — with despair. You can see the looks of confusion and horror, of dismay and doubt. Why would something like this happen? Why George Floyd? Why Derek Chauvin? Why here, of all places? Here in the "land of the free" and the "home of the brave"?

There are reasons for all of this, of course, but we claim not to know them. When they finally force us to look our racism in the face, we call them "unfair." "There are better ways to call attention to your plight," we homilize them. But we don't tell them exactly what that is because we've never done it.

As a result, the people we've kept down so they couldn't rise up, we condemn because they don't rise up. And so they did.

Now, we're really unhappy about that. We had nothing to do with this racism thing, we say, and we're not going to apologize for something that happened centuries ago.

But maybe we should think about that a little. After all, it's in our DNA. It's what we do. Generation after generation.

No, this generation didn't buy slaves to pick cotton. Instead, this generation underpaid them so they'd keep doing the servant work we don't want to do. Or we deny them decent places to live, making it all but impossible for them to get nice little brick homes, too. Or we elect a president who calls other races names and insults while the whole world looks on in horror as the mask of gentility drops from the face of a racist nation. Or we allow him to put their children in cages to show the world that we don't want "those kind of people" around us.

No doubt about it. We've done our share of racism while we blame it on the racist generations that went before us. Maybe just apologizing for our own sins against a people would be a start.

We've done our share of racism while we blame it on the racist generations that went before us. Maybe just apologizing for our own sins against a people would be a start.

Isn't it about time that we ask ourselves whether or not a people who can forcibly enchain another race into slavery — and label them inhuman in order to justify it — can ever really admit that the blacks we chained and sold really were/are human without having to come face-to-face with our own inhumanity?

Maybe this time — watching policeman Derek Chauvin kneel on a black man's neck until he dies on the street — we'll understand why quarterback Colin Kaepernick kneels during the singing of the national anthem in football stadiums for all to see. Maybe we'll even have the integrity to stop trying to ruin Kaepernick's life because he's drawing our attention to it. Peacefully. Nonviolently. While the elites of the sport show their patriotism by trying to destroy Kaepernick, too.

So what can we do about all of this after the National Guard goes back home again? There are three possibilities, I think:

First, we can start having official mixed conversations in every community in the United States to identify the issues that embody the racial problems and legislate for their relief. Here and now. Every community this time.

Second, we can examine, evaluate, replace, reeducate and rebuild a police force in the United States that is as humane and evenhanded as we pretend it is.

Finally, we must not let our private, personal selves off the hook. We are killing one fatal virus by each of us wearing masks and practicing social distancing. We can kill the virus of racism if we begin to practice social outreach across racial lines. By doing nothing but talking about it, we are the carriers of the disease of racism. Every family, every white person in the country, needs to reach out and make a black friend.

Now whites need to get to know a black colleague, a black family, who comes to our houses and eats at our tables. We need to have black family friends who attend our parties and whose kids play with our kids. We need total outreach so that our words about equality, friendship and peace can become embodied in the entire society. Then the virus of racism will also die out.

From where I stand, racism is the temptation white people have yet to overcome in an honest, genuine way. Catholics know that confessing the sin is not enough. According to the Catechism of the Catholic Church, forgiveness requires our "intention to make reparation," as well or, as we once said, "a firm purpose of amendment."

Racism won't go away until each of us, white and black, melt into the human race as one. It won't start with legislation. It will only start when we do.

Oh, by the way, as I worked on this column, the largest demonstration of citizens I have ever seen in Erie, Pennsylvania, walked with purpose — black and white together — past the Benedictine priory. They were all peaceful. They were all chanting, "I can't breathe," while a cavalcade of cars drove behind them through inner-city Erie, honking as they went.

Think about it: It happened in Erie, Pennsylvania, population about 100,000. We didn't show up on television that night. Too small. But if, as the Rev. Martin Luther King Jr, said, "a riot is the language of the unheard," this orderly togetherness, God bless us, was the language of a new world in the making. Yes, some few turned violent. But a world in which no amount of agitators can stop peaceful protesters from rebuilding had already started.

A version of this story appeared in the June 26-July 9, 2020 print issue under the headline: Racism is the temptation white people have yet to overcome .

Column | Racism is the temptation white people have yet to overcome