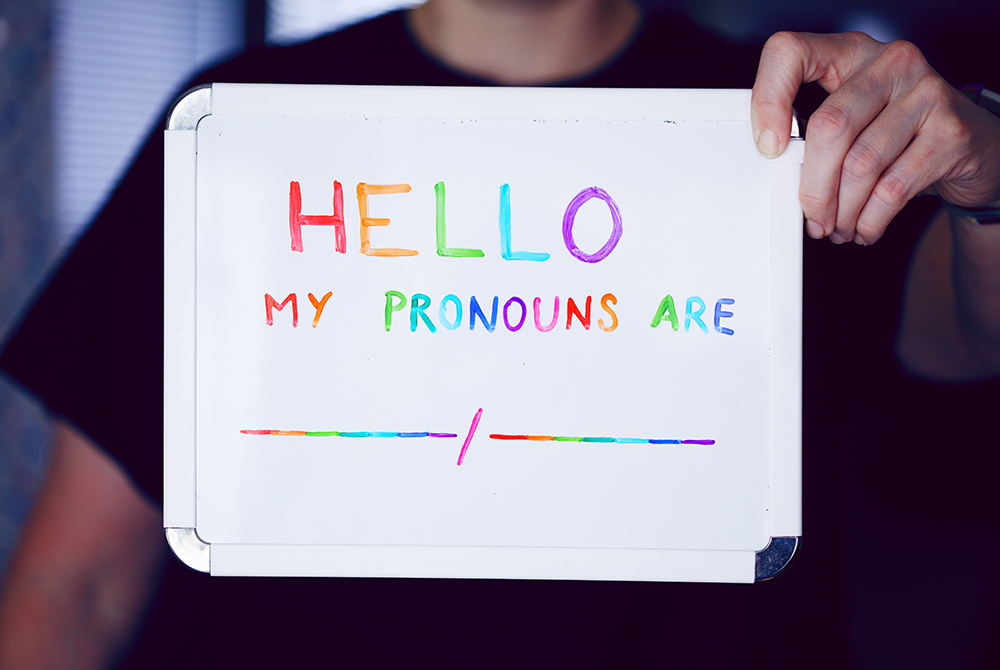 Names play an important role in the Catholic tradition. At the celebration of baptism, the first question posed to the parents is "What name do you give this child?" At confirmation, it is customary for the confirmation candidate to select and embrace the name of a patron saint. Many members of religious congregations adopt a new name as part of their religious profession, even when their "legal" names (on government documents like birth certificates) do not reflect it. Clergy and religious alike take on new titles and appellations such as "Father," "Sister," "Brother," "Bishop," "Deacon" and so on, and expect others to address them accordingly.

The significance of names, the changing of names and the importance of being identified by a preferred name is also present throughout the entirety of the Bible. From Abram to Abraham and Sara to Sarah, to the angelic revelations about the names John and Jesus in the Gospels and the change from Saul to Paul in the Acts of the Apostles, embracing a new identity tied to a new nominal expression is commonplace and rooted in our faith tradition.

So why is there so much resistance and pushback among some in the church — including in Catholic schools — to using the gender pronouns or gender-affirming names preferred by individuals, especially those who are members of the LGBTQ community?

Calling individuals by the names and pronouns they prefer would not only seem to be the decent and respectful thing to do, which follows from the "golden rule" of doing unto others what you would like others to do unto you (see Matthew 7:12), but it also aligns well with the important role names have throughout Christian Scripture and tradition.

I recently participated in a workshop on how Catholic institutions of higher education can better support their LGBTQ students, staff and faculty. At one point during the discussion, another workshop participant made the simple yet profound point that an overwhelming number of people request that they be addressed in some form that differs from the plain reading of their given or family names.

For example, my given name is Daniel, though I generally go by "Dan" when meeting people in person. That may seem like an inconsequential point, but think about how disrespectful it would be if I introduced myself to someone and asked to be called Dan only to have the same person insist that I only be called by the name as it appears on my birth certificate or some other name or moniker that I did not select.

This fellow workshop participant rightly noted that insisting on calling individuals by a name not of their choosing, let alone intentionally refusing to reference or address them by their preferred name or pronoun, is rude and hostile.

I would add that such behavior is also unchristian and sinful.

Names have power, and the significance of naming oneself and others is not to be taken lightly. One can think of other ways throughout history that the refusal to acknowledge an individual's preferred name or self-referential identity was used to deploy subjugating power and resulted in dehumanization.

Take, for example, the practice of those Americans who enslaved kidnapped Africans and treated them as chattel, without rights, culture, history, agency or names. In the despicable system of the American slave trade, the common practice was for the enslavers to "name" the enslaved, giving them monikers not of their choosing.

Another, more contemporary example is taking place today in western China where the oppressed Uyghur community, the minority Muslim population in China, has been not only imprisoned in "reeducation camps" but also forbidden from using numerous preferred names of Arabic or Muslim origin by the Chinese government.

No decent person would dispute that both of these examples are clearly instances of human rights violations. So then why do so many self-identified Christians and especially Catholic pastoral leaders insist on enacting comparable practices and policies?

I don't have a good answer to that question. To be honest, I am continually perplexed — as was my fellow workshop participant — by both the arrogance and audacity of those who would demand such dehumanizing practices. Not only is refusing to call another person by their preferred name or pronoun disrespectful, in the case of many Christians who refuse this basic act of decency, it is because they deny the very existence and experience of transgender or nonbinary persons. 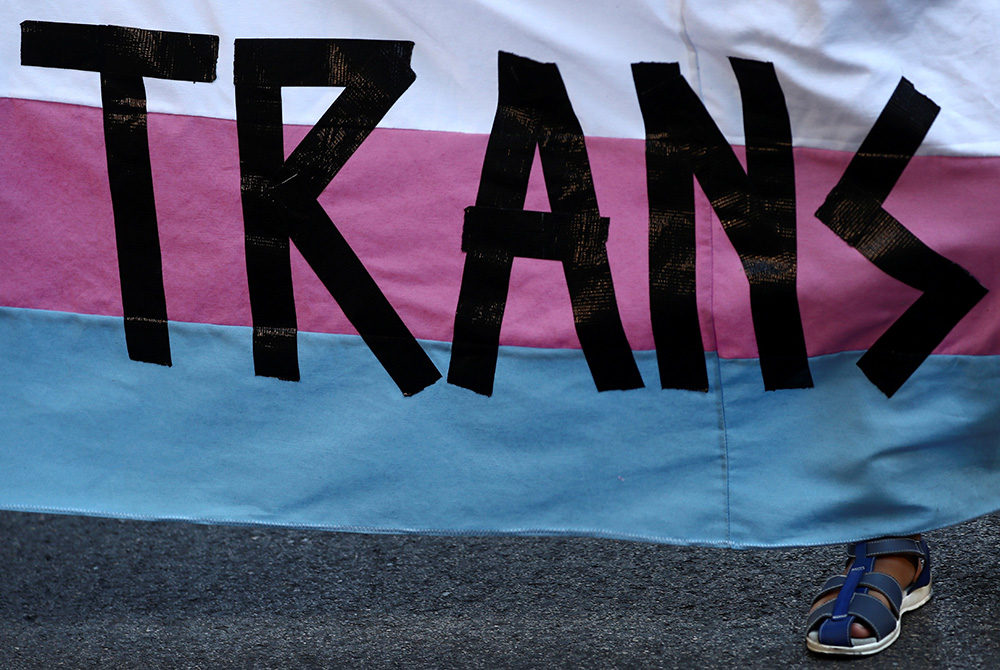 A person holds a "Trans" banner in this illustration photo. (CNS/Reuters/Sergio Perez)

The overt transphobia reflected in such behaviors as denying others the fundamental human rights to personal agency and self-identification is not compatible with the message of the Gospel nor with the long-standing history of name changes within the Catholic tradition that are associated with one's religious discernment and deepening sense of identity before God and others.

Frankly, I'm not sure what it would take for those who willfully ignore the realities and experiences of people who are different from them to realize the harm they are causing. Perhaps some kind of nonviolent civil (or maybe better put, ecclesial) disobedience might help our fellow Christians — especially those in positions of leadership and authority in the church — get a taste of their own medicine and experience a small piece of the shame, disrespect and dehumanization such unethical practices place on others.

As should be evident by now in this column, I am fully supportive of all people being addressed in the respectful and dignified manner of their preference, and my Christian faith tells me that this should also apply to transphobic and small-minded individuals and communities even as they insist on withholding the basic dignity and respect owed to their siblings in Christ.

However, I do wonder what it might mean for the bishops who have discouraged the faithful from using the preferred names and pronouns of others, or the school principals who forbid teachers, staff and students from expressing their preferred names or pronouns, or anybody else in a comparable position to be called by others something they did not choose and may not like.

I mean, after all, if these self-proclaimed faith leaders are exercising the "golden rule," then we should do to them what they are doing to others, right? And if they insist that disrespecting individuals and forcing them to respond to names or identities not of their choosing is the "Christian" path, then I suppose the same bishop wouldn't mind it if we called him "her" or "Sister Mary" instead of "Bishop So-and-so." Or, we should insist the school principal who prefers to be addressed as "Mrs. Smith" ought to be called "Bob" now.

Obviously, I don't believe that inflicting the same harm on the victimizers that they are perpetrating on an already vulnerable population in our schools, churches and communities is the correct course of action. As my mother often said to my brothers and me growing up, "Two wrongs do not make a right."

But I do hope that those who are quick to endorse such disrespectful and abusive policies step back and think about what such an experience might feel like and do to them if they were in the proverbial shoes of the students, parishioners and neighbors treated in this way.

The Catholic tradition, which values the importance and power of names and naming, is also one that is firmly committed — at least in principle — to the inherent dignity and value of all human persons. It is a continued disgrace that so many of those who self-identify as Catholic use our faith tradition to reject and erase the self-identities of our sisters, brothers and other siblings in Christ.

A version of this story appeared in the Nov 12-25, 2021 print issue under the headline: Why Catholics should use preferred gender pronouns and names.