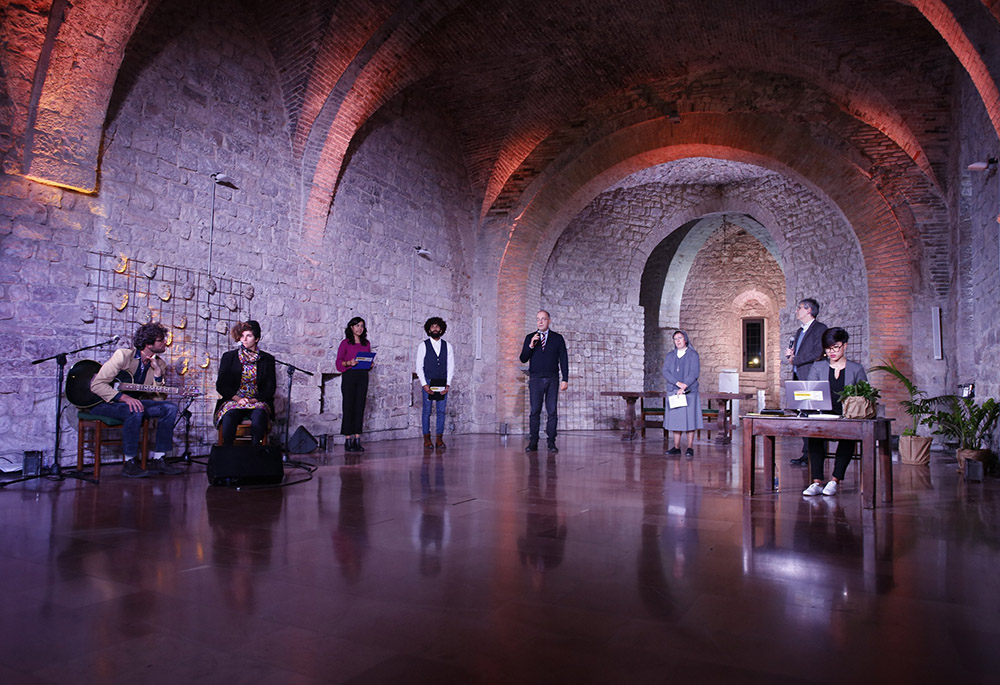 People participate in the "Economy of Francesco" virtual meeting from Assisi, Italy, Nov. 21, 2020. The meeting is a project of Pope Francis, who has called for a different kind of economy that better respects humanity and nature. (CNS/Economy of Francesco)

During the past two years we have been involved in a remarkable initiative of Pope Francis' called the Economy of Francesco, an international movement of young economists, entrepreneurs and change-makers engaged in a process of inclusive dialogue and global change.

The Francesco here is the pope's namesake, St. Francis of Assisi. The idea is to develop a new economics for the 21st century, one that responds to the challenges of our time. In the pope's inimitable wisdom, he turned the task over to young economists around the world, with oldsters such as us serving as advisers and sounding boards.

Why would young people want and need a new economics? Isn't the market system doing just fine? Not in the pope's view, nor that of the world's young people. And we agree. 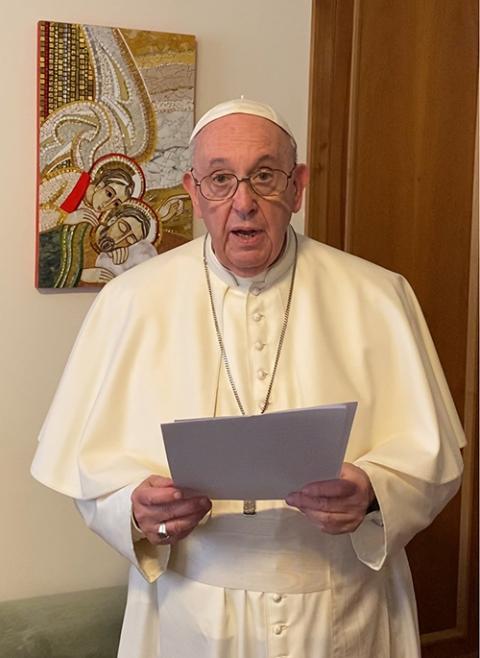 Pope Francis speaks in a video message to young adults meeting Oct. 2, 2021, in Assisi, Italy. The pope told young economists and entrepreneurs that the world needs their creativity and boldness to create an economy that is better for people and for the environment. (CNS/Vatican Media)

Young people today will be around until the end of the 21st century. But what kind of world will they face? Given that climate catastrophes are already hitting us, how much worse will these disasters be in 2050 or 2070? If we have already faced innumerable epidemics in the first years of this century — the latest being COVID-19 — how many more will today's young people face in their lifetimes? If the combination of technological change, globalization and plutocratic politics fuels inequality and discontent, how will this inequality undermine social stability and democracy in the decades ahead? If millions of people are already forced to migrate due to drought, violence and hunger, how many more will be uprooted from their homes?

The Catholic Church has some important things to say about all of these questions — not as technical specialists, but as the bearers of a 2,000-year-old moral message, that we should treat others as we would like to be treated and love our neighbors as ourselves. Not surprisingly, similar wisdom has cropped up elsewhere around the world. Confucius offered a similar message to the state of Lu, and Chinese civilization for more than two millennia has benefited from Confucian wisdom.

Our economy today is not based on these moral principles. It is based on a very different idea: that if we each pursue our own objectives, we can achieve the social good. Adam Smith was the founder of this point of view, which he called the "invisible hand" of the market economy. There is some wisdom in it: Individual initiative motivated by profits can lead to extraordinary innovations and economic growth.

Yet the invisible hand turns out to be a deeply flawed concept, one that leads to complacency in the face of suffering and to the inadvertent destruction of the Earth itself. When each person is looking out mainly for themselves, expecting that the miracle of the market will make things right, the result turns out to be a stunning level of indifference to the growing range of global calamities. Pope Francis has called this the globalization of indifference.

Even though the Catholic Church does not specialize in technical economic analysis, it has developed a body of thought, called Catholic social teaching, which offers powerful ethical insights for young people engaged in rethinking the world economy. These teachings draw upon the cumulative wisdom of two millennia of reflections on justice, fairness, reciprocity and responsibility by some of the greatest thinkers in history.

The modern Catholic social teachings have been developed with powerful insights since the end of the 19th century, when the church began to grapple with the profound social and economic dislocations wrought by industrialization. These teachings have identified ethical precepts for economic life and statecraft, centered on the common good and rejecting both suffocating collectivism and unfettered free markets. One key principle is the universal destination of goods, meaning that the economy should benefit all people. Contrary to free-market ideology, private property is not an absolute or unconditional right. Help for the poor and protection of the Earth are ethical priorities.

We've watched up close how these ethical principles are applied to the great challenges of our time. In addressing issues such as climate change, economic exclusion, human trafficking or protection of the Amazon rainforest and its Indigenous communities, the church systematically explores the best scientific and ethical knowledge on the issues. The Pontifical Academy of Sciences and the Pontifical Academy of Social Sciences, among other parts of the Holy See, reach out to world-leading scholars and practitioners from around the world, drawing insights from people of all faiths and regions. The technical insights are studied and discussed, and most importantly considered from a moral perspective. The first question to be asked is what they mean for the poor, the vulnerable, the young and future generations.

These insights inform the pope, who shares his ethical reflections with the world in his encyclicals and other communications. They become the basis for the young people too in their deliberations over the Economy of Francesco.

Pope Francis' two recent encyclicals Laudato Si' and Fratelli Tutti are powerful examples of this unique process. In Laudato Si', Pope Francis offered a compelling moral vision for overcoming the climate change crisis. The encyclical was widely read by world leaders in the immediate run-up to the 2015 climate convention that adopted the Paris climate agreement. In Fratelli Tutti, Pope Francis advises all of us, world leaders and citizens around the world, on how to reach out to cooperate with others across national, religious, racial and ethnic divides.

His message is as clear as it is powerful. As he puts it, "Interdependence obliges us to think of one world with a common plan." We need, in short, to overcome our indifference, conflicts and excessive individualism to work together as one human family bonded in common purpose.

Part of our work together in the Vatican in recent years has been to engage with religious leaders of many faiths, philosophers and technical experts to help find the bases for this common plan. That is also part of the work of the young people in Assisi. The news on this front is good. We see every sign that Pope Francis' hope for a common plan is within reach. Christians, Jews, Muslims, Buddhists, Hindus, Confucians, Indigenous leaders and secular philosophers have found time and again that there are common perspectives on how to proceed for the global common interest.

We strongly recommend the great joy of delving into the church's social teachings, starting with the pope's recent encyclicals. The young people in Assisi and our own students around the world heartily agree. It's not all that often that one gets to engage intensively with the thoughts of Aristotle, Jesus, Thomas Aquinas, Francis of Assisi, Ecumenical Patriarch Bartholomew of Constantinople, the Grand Imam Sheikh Ahmad el-Tayeb of Al-Azhar University and Pope Francis.

The church's social teachings make it possible for everybody to join in this 2,000-year-old conversation. This conversation can be a springboard for a better world. That is the true goal of the Economy of Francesco.