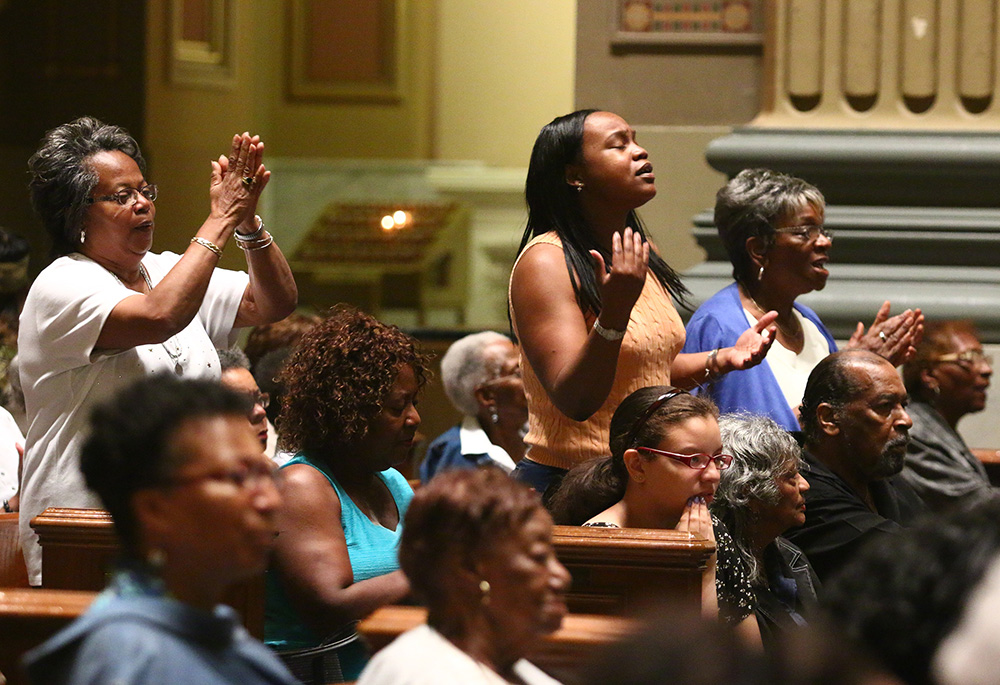 Black Catholics participate in a revival in the Cathedral Basilica of Sts. Peter and Paul in Philadelphia in this undated photo. (CNS/CatholicPhilly.com/Sarah Webb)

My entire career has been about ending the erasure of Black Catholics from academic and public discourse. A refrain I've heard throughout my career across religious and racial lines is "I didn't know there were any Black Catholics." After more than 20 years of doing this work, this refrain persists despite the decades of brilliant, influential work by Black Catholics on Black Catholicism.

This is one of the reasons I began the #BlackCatholicsSyllabus and articulated from the outset that the point of the syllabus is to prioritize the voices of Black Catholics in the creation of our own narrative. It's also why this week's Pew Research Center report, "Black Catholics in America" is the data I dreamed of having as an undergraduate and graduate student. I also dreamed of having a report like this in the years since I finished graduate school.

Much of my efforts have focused on ending erasure within the Catholic sphere. However, Black Catholics are not just erased from Catholic narratives — they are also erased from discourse on the Black church as well. For example, last year, PBS aired a two-part documentary, "The Black Church: This Is Our Story, This Is Our Song," hosted by Harvard University professor Henry Louis Gates Jr. In four hours of coverage, despite incorporating Catholic imagery, such as iconography from St. Sabina Church in Chicago, the documentary did not discuss Black Catholics.

This dual erasure is why Pew Research Center's report is so important. Along with last year's "Faith Among Black Americans," this week's survey on Black Catholics is urgently needed. Both are poised to be regarded as landmark studies. The 2021 report talks about issues unique to Black Americans, such as the role of the Black church. The result is a groundbreaking study that looks at religion among Black Americans in a way that hasn't been done to date by a major survey. Its large, representative sample of over 8,000 respondents allowed the researchers at Pew to delve deeply into the diversity of the Black religious experience in the United States and conduct analyses of groups that are often left out of such discussions, including African immigrants, people who are religiously unaffiliated and Black Catholics. This level of analysis will allow researchers to turn to these data for many years to come.

For four years, I consulted with Pew researchers on the project starting even before the project officially began. In January 2018, I was invited to the Pew offices in Washington, D.C., to give a presentation on my work and discuss the kind of data Pew could collect that would be especially useful to qualitative researchers such as myself and to church leaders for pastoral planning purposes. As a result, Black Catholics were on the research team's radar from the very beginning of the project and played a crucial role in the centering of Black Catholic experiences, beliefs and attitudes of Black Catholics.

"Black Catholics in America," published on March 15, examines Black Catholics within a larger Catholic contest and within the context of "Faith Among Black Americans." Scholars, practitioners and people of goodwill who are simply interested in learning more haven't had a study that does all of this at once. It is profound. It is data and context that simply didn't exist when I began my training in sociology. I frequently remind myself that I write the things I wanted to read as a student. Consulting on both "Faith Among Black Americans" and "Black Catholics in America" means I have been a part of knowledge I desperately needed but wasn't available when I was a student. 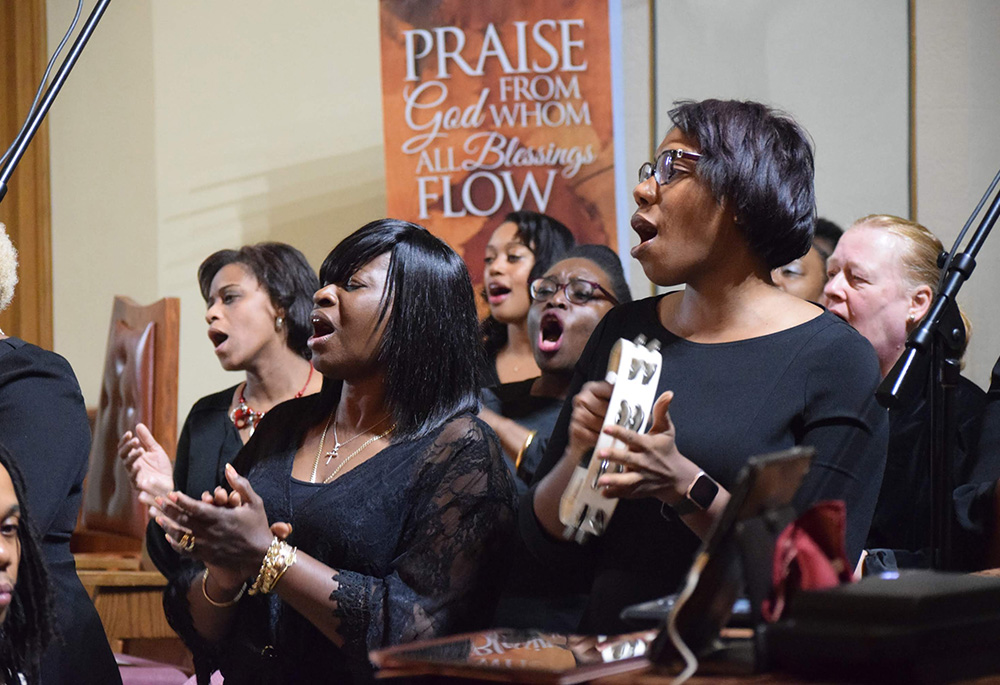 The new study tells us that 6% of Black Americans are Catholics. While this percentage is admittedly small, it still means that there are nearly 3 million Black Catholics in the U.S. Millions of people must be included in the conversation about what it means to be Catholic in our country if the conversation is going to be comprehensive. Furthermore, we learn from this study that 20% of Black Americans born in sub-Saharan Africa and 15% of Caribbean-born Black Americans identify as Catholic while only 5% of U.S.-born Black Americans identify as Catholic. These numbers tell us that Black Catholics in the United States are not a monolith. These drastically different numbers deserve further consideration by scholars and the United States Conference of Catholic Bishops as well as dioceses and parishes. Church leaders must keep this in mind in ministering to Black Catholics and creating pastoral plans. Similarly, scholars must incorporate this knowledge into their research.

The information provided by the study can, and should, inform scholars like me in addition to national, diocesan and parish leaders in our work. The large scale of this week's report offers data that just isn't possible for a qualitative researcher to collect and it affirms what my own research has found over the last 20 years. I was not surprised to learn from the full report that only 17% of Black Catholics attend a predominantly Black church and a comparable 18% of Black Catholics report a combination of call-and-response, and other expressive forms of worship during Mass. Part of my research involves examining liturgy as a form of identity work where I've discussed just this type of worship experience in detail. I've discussed at length how African American Catholics incorporate music, preaching and Church aesthetics into liturgy in order to create a unique identity as African Americans and as Catholics.

Only 41% of Black Catholics report having heard a homily on race in the 12 months prior to completing the survey and only 31% reported hearing a homily on political engagement in the same time period. The reckoning around systemic racism that we have seen over the last year has demonstrated that it is long past time for the church to regard racism as a pro-life issue. For this reason, these findings are also a call to action. A thunderous 77% of Black Catholics said that "opposition to racism is essential to what being Christian means to them," yet, only 41% reported having heard a homily on race in the twelve months prior to completing the survey. Many Black Catholics are not getting a message at Mass that they identify as something essential to being a Christian.

While most of the data were collected before the reckoning around systemic racism began in the wake of George Floyd's murder in 2020, these shocking, but not surprising, numbers will add up to losing Black Catholics if we don't see our church fighting with, and for, us for racial equality. This week's report also tells us that 46% of Black adults who were raised Catholic no longer identify as such. The aforementioned disconnect between the themes Black Catholics hear about at Mass and what they consider essential to being a Christian provides some insight as to why so many Black Catholics leave the church. The results for young adults only exacerbate this situation. 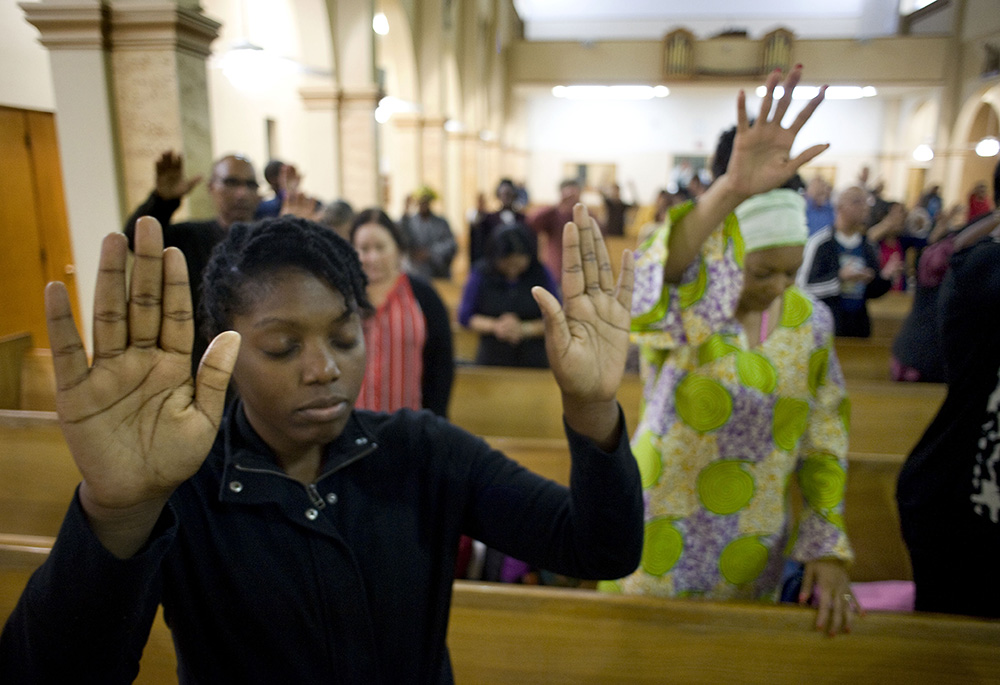 Pew's 2021 study reports that 46% of Black young adults in Generation Z (ages 18-23 at the time of the survey) seldom or never attend religious services. Organized religion — across denominations — ignores this finding at its peril. The sex abuse crisis has already damaged the church's credibility across generations. This reality coupled with Pew's finding that close to half of all young Black American adults rarely or never attend religious services should be a warning to Church leaders that concrete action must be taken now.

Since the summer of 2020, the U.S. bishops' conference has hosted "Journeying Together" as an ongoing series of events focused on young adults and those who minister to young adults. While this is a concrete action directed at young adults, it reaches those who are already actively engaged in the church. Evangelization must be directed at those young adults who are not, or are only minimally, engaged. Refusing to critically engage this group will not bode well for the sustainability of parishes and schools in the decades to come.

The Pew report, "Black Catholics in America" along with last year's "Faith Among Black Americans" are concrete steps to ending the erasure of Black Catholics. It provides urgently needed data about Black Catholics who are so often excluded from discussions of Black Americans' religious attitudes and experiences, and who are not given needed consideration in Catholic discourse. This study is a call to action for scholars and church leaders alike. It tells us concretely that, like the entire church, Black Catholics are not a monolith. The future of the church depends on deepening our understanding of this in order to minister and create policy accordingly.