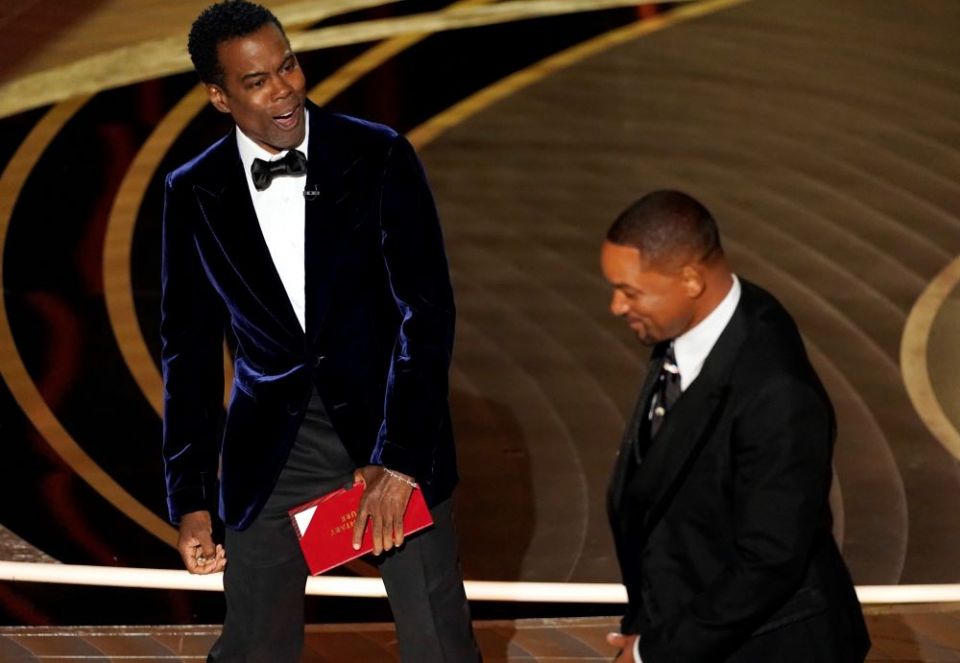 The comedian Chris Rock, left, reacts after actor Will Smith slaps him onstage during the 94th Academy Awards at the Dolby Theatre in Los Angeles March 27. (AP/Chris Pizzello)

For the first time in what seems like weeks and weeks of nonstop coverage of violence in Europe and around the world, our attention March 27 quickly shifted to the Oscars, where Will Smith slapped Chris Rock for making an insensitive joke about Smith's wife, Jada Pinkett Smith.

In response to the incident, the Academy started a disciplinary process asking for Smith's removal from the Academy of Motion Picture Arts and Sciences. Smith resigned from membership on April 1.

The slap has spurred polarizing discourse, with much of it, aside from that of Black women and men, focused not on the violence and ridicule of a Black woman at the Oscars, but on Smith's behavior, whether he was right or wrong. Almost all criticism, especially that from white Americans, seems rooted in personal takes on sin and transgression: what is acceptable versus what is not; what breaks from our society's unwritten/written moral codes of conduct and what does not; how we should behave in public versus how we should not.

Smith's individual behavior is a symptom of a culture still committed to morality/values/responding to harm rooted in white supremacist, Christian ideas of individual sin. Rather than questioning our larger culture and consumption of art, many have instead chosen to scapegoat Smith as some kind of rare, unimaginable incident occurring within a perfect Hollywood.

The Oscars is just one of the many microcosms in which Black people are publicly harmed and then expected to react with nothing but class.

It is important to understand these questions/themes by connecting Christian ideas of transgression with feminist scholar, writer and the author of Misogynoir Transformed: Black Women’s Digital Resistance Moya Bailey’s definition of misogynoir.

Transgression means presumptuous sin. To transgress is to disobey intentionally. Samson deliberately broke his Nazarite vow by touching a dead lion (Numbers 6:1-5; Judges 14:8-9) and allowing his hair to be cut (Judges 16:17). By doing so, he committed a transgression. David was referring to this kind of sin when he wrote: "Blessed is the one whose transgressions are forgiven, whose sins are covered" (Psalm 32:1). When we knowingly run a stop sign, tell a lie or blatantly disregard an authority, we are transgressing.

Smith transgressed against the written and unwritten social codes of the Academy. His slap was not salvific but merely the physical manifestation of his anger and indignation at a joke at the expense of his wife, a Black woman he has time and time again publicly loved and cared for. His slap, for so many, was a symbolic and physical rejection of a culturally codified and institutionally sacralized violence against women of color that all too often goes unaccounted for. Smith is transgressing the culturally normalized and repeated transgressions against Black womanhood in virtually every aspect of U.S. life, including the racism some politicians hurled at Judge Ketanji Brown Jackson during Supreme Court confirmation hearings and insensitive jokes from comedians.

Smith's transgression forced us to confront what would happen in a world committed to the complete removal of even the smallest moments of misogyny against Black women, a world fighting against what Bailey first defined in 2008 as "the uniquely co-constitutive racialized and sexist violence that befalls Black women as a result of their simultaneous and interlocking oppression at the intersection of racial and gender marginalization," or misogynoir. 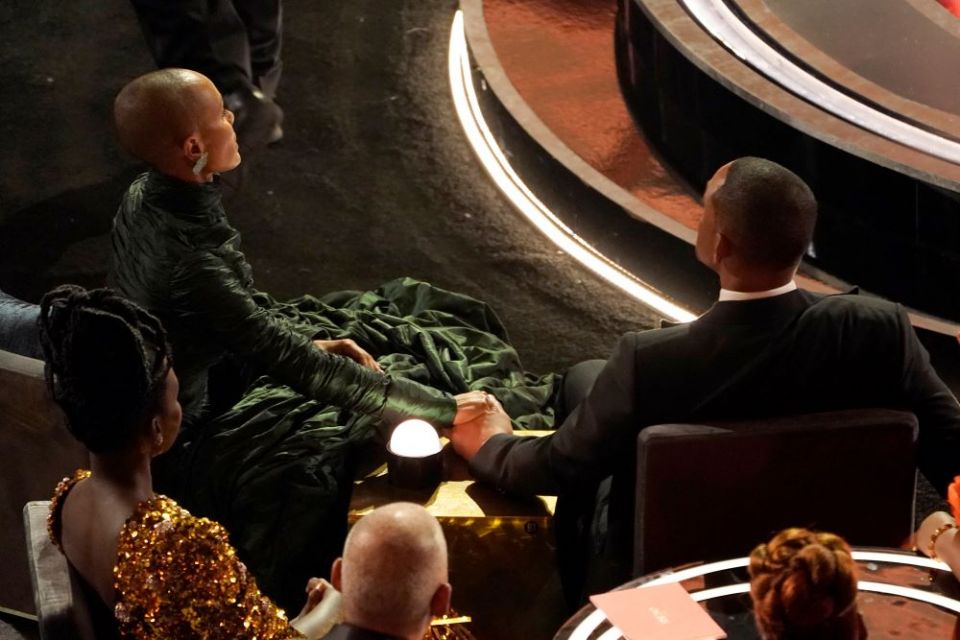 Jada Pinkett Smith, left, and Will Smith hold hands in the audience at the Oscars on March 27. The stunning physical altercation between Will Smith and Chris Rock has sparked debate about the appropriate ways for Black men to publicly defend Black women against humiliation and abuse. (AP/Chris Pizzello)

Following the Oscars, Bailey tweeted: "Black women are expected to endure misogynoir, in public, without comment. Take your pick of examples from last week and what a way to start this one. We deserve better than faint praise for our composure in spite of it all."

The incident, regardless of whether you support or condemn Smith, must be contextualized within larger histories of anti-Black and misogynistic violence in Hollywood. It is a moment for us to reflect upon and scrutinize the institutionalized systems of misogynoir within our culture and society, including the spaces we occupy as Christians.

Violence against Black women continues in almost every aspect of American life, from our health care to our media to our schools, and almost as great as the violence is the deafening silence when Black women are publicly harmed. The moment Will Smith slaps Chris Rock is not a revelation for Black women and women of color who know all too well the vulnerability of being the butt of somebody's joke. Americans — especially non-Black people — should consider this moment and what it might reveal about our culture and our values as Americans. It is a moment that invites us to further understand misogynoir and how it impacts how we define the moral values in our society.

Black women are expected to endure misogynoir, in public, without comment. Take your pick of examples from last week and what a way to start this one. We deserve better than faint praise for our composure in spite of it all.

This moment is also a challenge for Christians to think more fully about accountability.

In her essay for the website xoNECOLE, culture writer Hanna Phifer analyzes what this moment can teach us about how we talk about carcerality. "If a Black man who has had a professional and personal reputation of being one of the nicest men in Hollywood for over the course of his three-decade career can immediately be villainized, I shudder at the thought of the way people are treating the Black boys and Black men in their everyday lives with considerably less social and monetary capital,” Phifer writes.

Instead of relegating the slap as just another form of violence to be addressed through our legal system, she adds, the moment invites us to imagine work happening between Smith, Jada and Rock — outside the public, white gaze.

Was the moment sacred? No. Was it necessary? No. But is it useful? I would say yes.

This moment has forced a conversation about anti-Blackness, including how it intersects with how we categorize our citizens into good versus bad, and how the ways in which we understand both categories were first established during the days of enslavement. This means that we must reconceptualize what behavior we consider good, and which persons we deem worthy of publicly defending.

It is a moment for us to reflect upon and scrutinize the infrastructures of misogynoir within our culture and society. The Oscars is just one of the many microcosms in which Black people are publicly harmed and then expected to react with nothing but class. Will Smith ruptured this illusion and disrupted the veneer of respectability and moral signaling.

In Civil Wars: Observations from the Front Lines of America, poet, playwright and essayist June Jordan wrote: "In the context of tragedy, all polite behavior is a form of self-denial." Her words are prophetic, calling us to question what we hold sacred as an American society, beginning with who we see as valuable, worthy and worth fighting for. 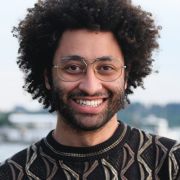 Jordan E. DeSanto writes on how Christian thought influences pop culture and politics. Originally from rural Washington state, he is a graduate of Yale Divinity School and the University of Washington.

When does a black woman's body become her own?