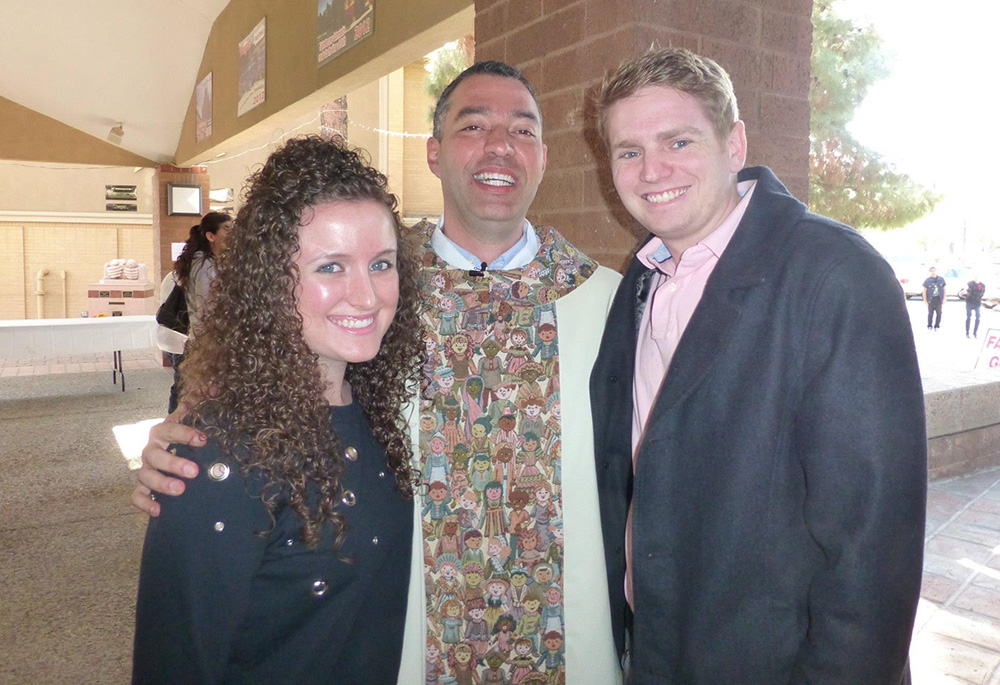 Kimberly Roland standing with Fr. Andrés Arango and her now husband Brendan Brady outside St. Jerome Parish in Phoenix, from around 2012-13 (Courtesy of Kimberly Roland)

On a chilly Sunday morning in January, I opened up an email from my Mom after she arrived home upset from Mass at St. Jerome Parish in Phoenix, where I received most of my sacraments and attended school for nine years.

The subject of the email — "Info re: Fr. Andres' baptisms announced today" — made my heart sink. On Jan. 14, mere days before Bishop Thomas Olmsted would reach the age of 75 on Jan. 21 and be required by canon law to tender his retirement to Pope Francis, his chancery office made a big announcement.

The baptisms performed by Fr. Andrés Arango, who has served across the Phoenix Valley for decades, were no longer considered valid. As a result, subsequent sacraments received by people having had those baptisms were now de facto invalidated.

The diocese launched a detailed website, with an FAQ to explain the situation and document Father Andrés' faults at length. To the tears and anger of his former and current parishioners and students, it was also announced that Father Andrés would be forced to resign from his post as pastor of St. Gregory’s, effective immediately.

It is worth noting that both St. Gregory and St. Jerome, both places where Father Andrés ministered, are diverse parishes in predominantly Spanish-speaking parts of Phoenix where the poverty rate is high. St. Gregory Parish is in a zip code with a nearly 30% poverty rate and 45% Hispanic population. Olmsted's decision adds insult to injury for the parishioners of St. Gregory's because it removes a highly educated, charismatic and bilingual pastor from service at a time when there is a priest shortage nationally.

What could be so egregious that it would invalidate hundreds or thousands of sacraments and force one of the best loved priests in the diocese to resign from his critical role of pastoring a parish and school?

It turns out he used the words "We baptize you" instead of "I baptize you" when baptizing babies and adults for many years. The Vatican's Congregation for the Doctrine of the Faith instructed in 2020 that such baptisms should not be considered valid because the church believes that the minister of a baptism is not acting on behalf of only himself or the local community, but as "the sign-presence of Christ."

The elaborate website built to condemn Father Andrés wreaks of pharisaical bureaucracy in a diocese riddled with decades of scandals, lawsuits, and missteps, particularly with the handling, or mishandling, of a multitude of child molestation and sexual abuses at the hands of criminal priests.

As my mind wandered to these horrors, I thought of my own parents, who were married by Fr. Dale Fushek, a now laicized priest who founded the national Catholic youth ministry organization Life Teen. Decades later, he was arrested and charged with assault and sexual misconduct with youth, but not before he rose through the diocesan ranks to become a monsignor.

Fushek was eventually excommunicated by Olmsted for starting his own schismatic church, not for years of alleged sexual crimes. How could such heinous acts like this be condoned for so many decades (not just in this diocese but nationally and globally) and on the opposite end of the spectrum a holy, faithful, good priest like Father Andrés receives a penalty that far outweighs the error he committed? Why were the sacraments administered by then-Father Fushek still valid when committed by an unholy man while the same sacraments administered by a pious priest, Father Andrés, were invalidated? 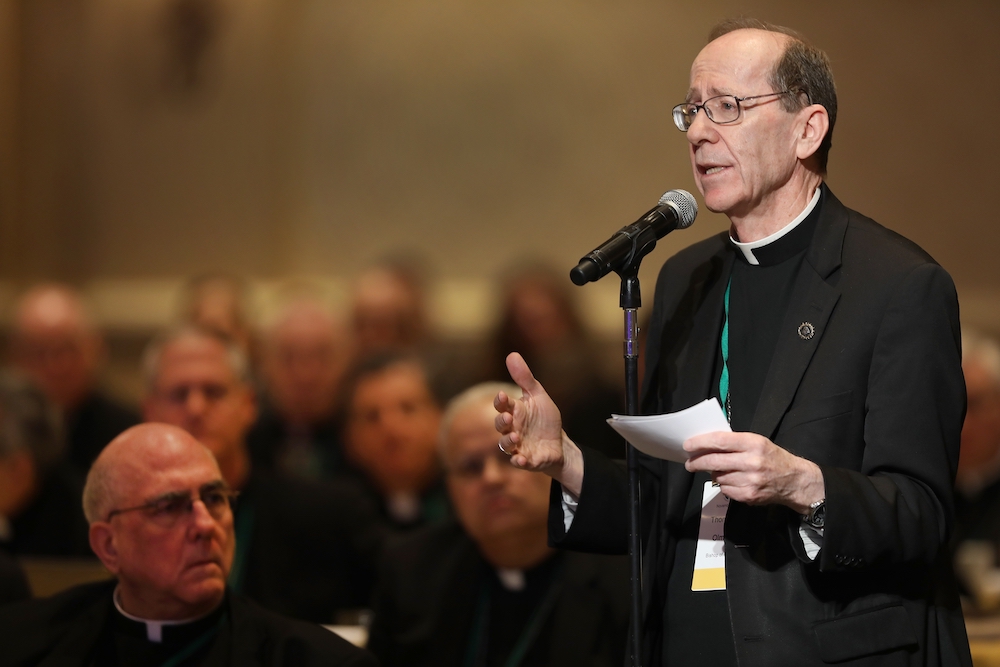 Phoenix Bishop Thomas Olmsted speaks from the floor Nov. 14, 2018, at the fall general assembly of the U.S. Conference of Catholic Bishops in Baltimore. (CNS/Bob Roller)

Pope Francis frequently exhorts Catholics to recall the day of our own baptism and to celebrate this day as if it were our birthday. As a cradle Catholic, I was baptized as a newborn child by then-Fr. Kevin McGloin, a family priest stationed at St. Jerome. I was saddened to learn that after honorably leaving the priesthood, in recent years McGloin has endured a fate similar to Father Andrés.

Olmsted removed McGloin from his position as a staff member at St. Patrick Catholic Community in Scottsdale, Arizona, in 2019, citing canonical prohibitions against former priests serving in teaching or leadership positions in the church. This despite the fact that Olmsted's predecessor, Bishop Thomas O'Brien, had allowed McGloin to serve in the role at St. Patrick's. 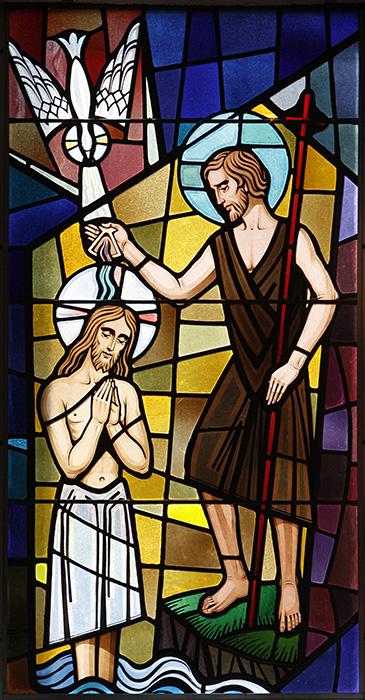 Christ's baptism by St. John the Baptist at the Jordan River is depicted in a stained-glass window at St. Francis of Assisi Church in Greenlawn, New York. (CNS/Long Island Catholic/Gregory A. Shemitz)

Does the fact that I was baptized by a laicized priest invalidate my baptism?

I know the answer to that question is no, but where is the FAQ section on the diocesan website for these actually important questions we grapple with? More importantly: Does Jesus care? While erudite theologians far more educated in canon law than I may debate the sacramental formula, my opinion is one based in pragmatic reality, Catholic social teaching, and the biblical knowledge that Jesus was baptized by his cousin in the Jordan River and not too fond of bureaucratic Pharisees.

As the last month has passed, my frustration and disbelief have increased. This news story moved from being locally reported in Arizona to a national and international story appearing across every media platform, and was even in the monologue of fellow Catholic Stephen Colbert's "The Late Show" on CBS. It has reached a fever pitch. Much like the localized coverage, the national news has consistently spurred outrage and disbelief, but not against Father Andrés for his error. Instead against the seemingly superfluous ruling levied by a bishop in the 11th hour of his tenure.

Of my dozens of close friends from Catholic high school and university, my husband and I remain only one of three couples who decided to have a full Roman Catholic Mass and sacramental marriage.

I say this not to imply any sense of moral superiority, but to show how dismal the numbers are of young people who wish to remain active in the church while simultaneously reckoning with my own crisis of faith: Is this really the church we wish to belong to? Are these manmade rules and rulings aligned with our faith? Is the exclusion of women, decades of child abuse cover-ups, and recent endorsements of problematic politicians at the pulpits of pastors and by the pens of select American bishops actually aligned with the teachings of the Gospel? Does our eternal salvation and baptism in Christ really depend on a holy and well-intentioned priest saying "I" instead of "we?"

I'm afraid I can neither affirmatively nor confidently answer yes to most of these questions.

But I do know this: Father Andrés is one of the best humans and priests I have ever met. He is loved ardently in Phoenix and has brought thousands of people closer to God and the church. If he had been corrected immediately, he would never have knowingly performed thousands of sacraments only for them to be invalidated — thus driving people further away from the church.

This entire scandal only further reveals the dysfunctional bureaucracy at the diocesan level, while simultaneously creating a movement of love and support to enshroud Father Andrés in his community. Now is the time for we, the faithful of the church, to stand in solidarity. We must continue to build Christ's church on Earth in a manner consistent with the Gospels and focused on who we include, not who we exclude.