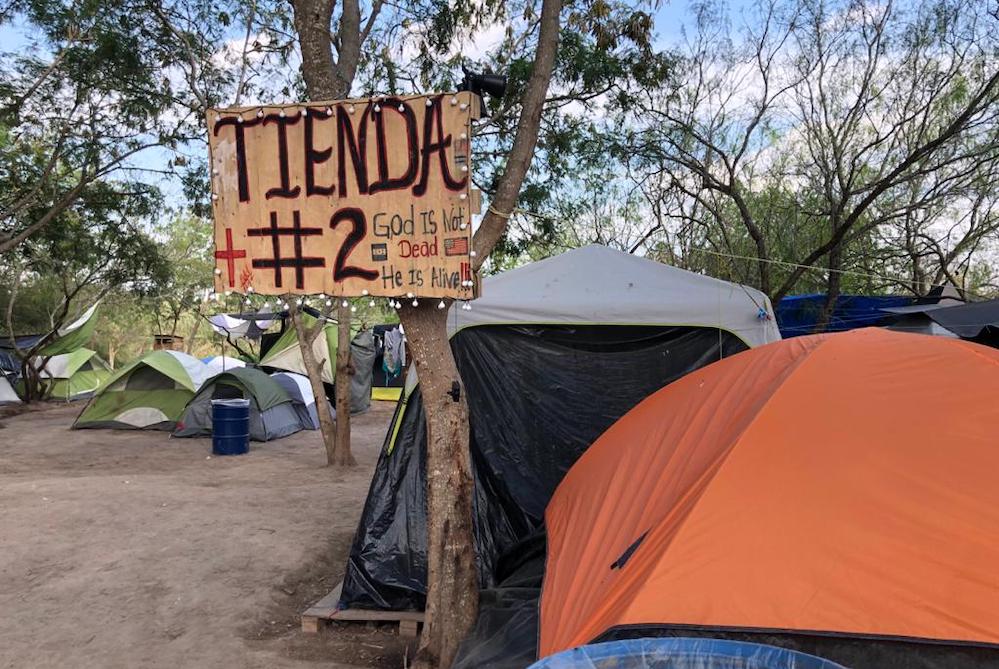 Matamoros, Mexico, across from Brownsville, Texas, is the site of a tent camp where migrants await their asylum cases to be processed by the U.S. government. The camp is home to approximately 2,500 people and arose in 2019 after the Trump administration enacted the "Remain in Mexico" policy for assylum seekers. (Ruby Fuentes)

As the coronavirus spread throughout Chicago in mid-March, Catholic Charities' Legal Assistance Program started seeing an increase in calls from non-English-speakers. One, a client who is an undocumented immigrant, had lost her job due to the pandemic. Her landlord was threatening to evict her and her children if she couldn't pay her rent.

Such threats were already common among the United States' approximately 11 million undocumented immigrants, but the coronavirus pandemic has only exacerbated fear among undocumented people and individuals seeking asylum here.

People who are undocumented do not qualify for economic stimulus funds and unemployment relief, face barriers to accessing healthcare and live with the fear that visiting a hospital could result in detention or deportation. And undocumented persons already in detention — and those at the U.S.-Mexico border — must now deal with additional dangers posed by the virus.

More than 2,500 people live in a temporary tent camp in Matamoros, Mexico, awaiting trials for their asylum cases for entry into the United States. The tent-camp arose in early 2019 when the Trump administration announced its "Remain in Mexico" policy for people seeking asylum.

Ruby Fuentes, a member of a local chapter of the Catholic reform organization Call To Action, visits migrants there and said many community members and organizations have stepped up to accompany their migrant neighbors But individuals living in Matamoros remain vulnerable.

"There's no way to prevent coronavirus spreading in this kind of confined space," Fuentes said. " 'Remain in Mexico' [policy] was a slow death sentence to begin with — and the U.S. government is complicit. But now coronavirus is going to speed up that process. As U.S. citizens we're safe within our walls — but asylum seekers, [in Matamoros] all they have is a piece of fabric."

Concern for the health of undocumented people in federal detention centers in the United States has increased after a handful of guards and immigrants have tested positive for COVID-19. Former acting Immigration and Customs Enforcement (ICE) Director John Sandweg is calling for the release of all immigrants in detention, as are the Congressional Hispanic Caucus and some Latino Christian leaders. Approximately 40,000 people are currently detained across the U.S.

El Paso Bishop Mark Seitz joined the Hope Border Institute, which ministers to immigrants at the border, and other local leaders in calling for the immediate release of migrants in detention centers.

"The vast majority of migrants in ICE custody have committed no crime at all and represent no threat to our community," said an April 7 statement from the Hope Border Institute. "However, the continued mass detention of migrants and asylum seekers in these facilities in this time of COVID-19 pandemic represents a clear and present danger to the health of migrants, border enforcement personnel and the entire El Paso community."

Zachary Johnson, executive director of Call To Action/USA, called detention a "sin in every circumstance," in an email interview. 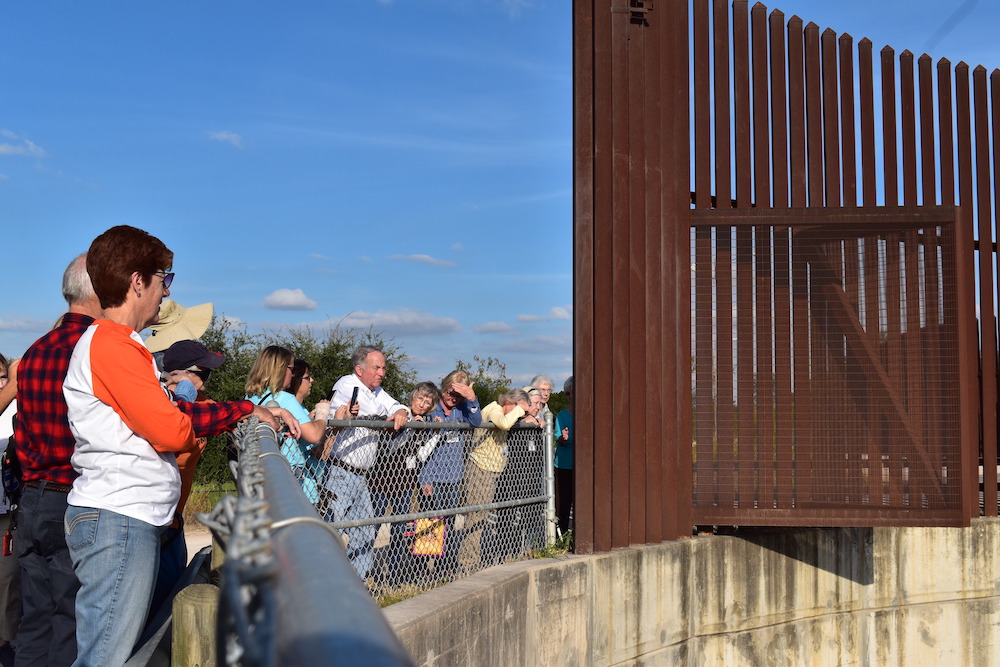 Call To Action/USA held a regional meeting in the Rio Grande Valley in November 2019, where about 50 Catholics gathered to learn about the migrant experience first-hand. "Participants were invited to use the experience to ground their immigration justice efforts in their hometowns in useful, informed solidarity with the center of the immigration struggle," Zachary Johnson, executive director of Call To Action/USA said in an email. (Ruby Fuentes)

Call To Action/USA held a regional meeting in the Rio Grande Valley last November, where about 50 Catholics gathered to learn about the migrant experience first-hand.

"The Catholic response at all times is to center the corporal and spiritual needs of marginalized people — to the point where we marginalize ourselves," Johnson said. "In crisis, this means using personal and institutional wealth, power and privilege to empower the margins to move out of harm's way."

Meanwhile, Jesuit Refugee Service/USA's detention chaplaincy program continues to serve people in five U.S. federal detention centers, including mothers and fathers who have been separated from their children.

"Our work changes and evolves, as the situation does, but we are committed to walk with detainees in ICE custody," Sotelo said. "Our staff are tired and have more work than they can take on but endeavor to continue their accompaniment with those who need it most." 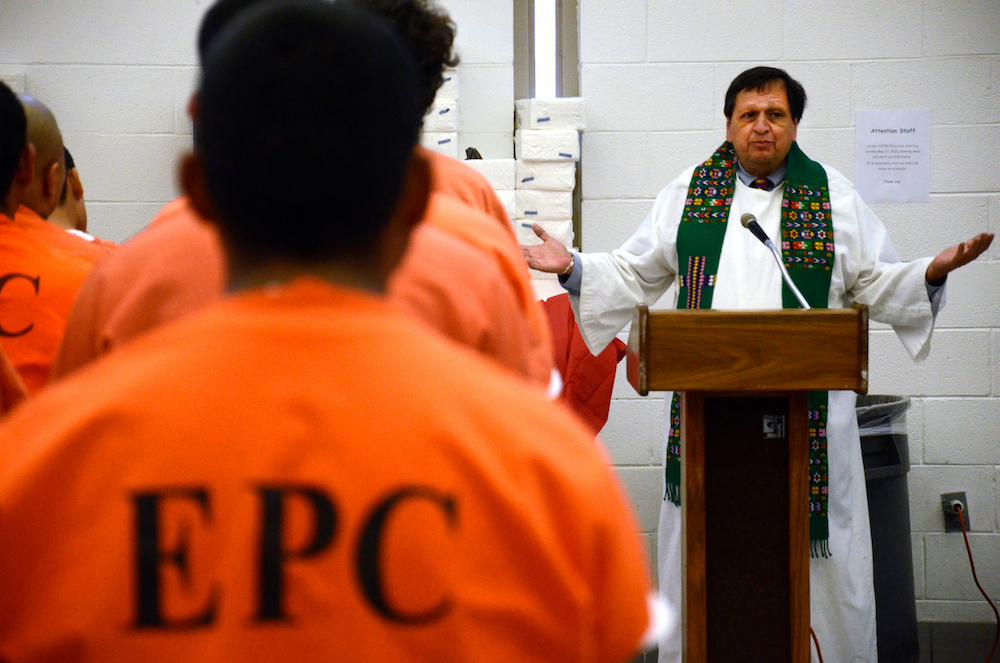 In a March 12 statement encouraging lawmakers to provide relief to those suffering because of the pandemic, the U.S. bishops mentioned that "special consideration is warranted for those most vulnerable: the poor, the elderly, the homeless, those in prison or detention facilities, immigrants and refugees, and those with severe underlying health conditions."

The statement was signed by Oklahoma City Archbishop Paul Coakley, chair of the bishops' Committee on Domestic Justice and Human Development.

Ashley Feasley, director of U.S. Conference of Catholic Bishops' Policy, Migration and Refugee Services Office, said that there has been confusion as to whether undocumented people are safe to enter a hospital without fear of potentially being arrested by ICE officials.

Though the Trump Administration has issued statements saying that immigrants would not be arrested if they seek medical treatment, Feasley said that they knew of cases where it has happened.

"We need to see more communication and guidance to reassure people that enforcement isn't going to occur," Feasley said. "Removing barriers to testing and treatment not only saves lives but keeps all Americans safer."

In cities hit hard by the virus, Catholic organizations are making undocumented immigrants a priority during the pandemic, said Hilda Bahena, department director of Catholic Charities Legal Assistance in Chicago, which provides legal aid to any low-income person, including immigrants with any legal status.

Bahena said that she frequently sends clients to Catholic Charities Emergency Assistance Fund to apply for emergency rental assistance, food and other basic necessities, though noted that the programs are very stretched at the moment.

In addition to providing food, Catholic Charities helps arrange counseling for adults experiencing grief or trauma and connects clients with public benefits though cooperation with volunteers and donors, Gonzalez said.

"What I'd like the Catholic community to know is that we're all in it together," she said. 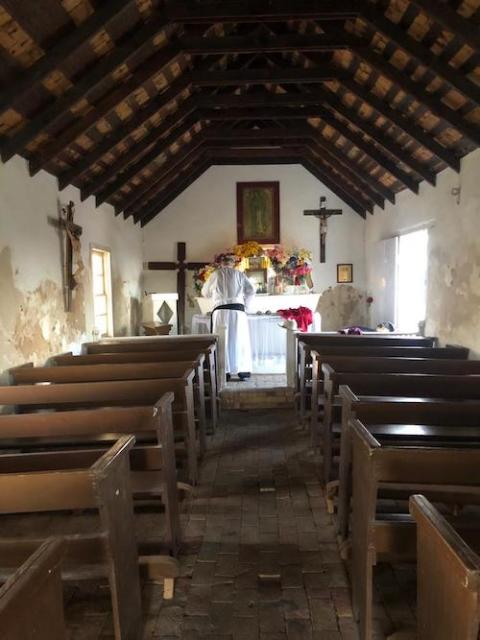 Every Friday morning before sunrise, Oblate Fr. Roy Snipes celebrated Mass in La Lomita chapel. Due to the coronavirus pandemic, all masses have been canceled. The chapel came into the national spotlight last year, as it sits directly where the U.S. government seeks to build a border wall with Mexico. (Ruby Fuentes)

At the U.S.-Mexico border, where Oblate Fr. Roy Snipes was celebrating weekly Mass at the historic La Lomita Chapel in the Brownsville, Texas Diocese, liturgy services have been cancelled because of the coronavirus. The chapel sits on land where the U.S. government seeks to build a border wall with Mexico.

Though currently the chapel is safe, it represents the tension of the Rio Grande Valley, which, according to Fuentes, "is blocked off from the rest of the world with check-points and the border."

Fuentes says the region will be a particularly vulnerable place to face the coronavirus pandemic, as it has only 143 ventillators for its 2.5 million population, many of whom are undocumented.

"Coronavirus has captured how unprepared we are for this epidemic. Other parts of the U.S. have the resources; we don't. We don't have many hospital beds, and some people don't have access to the internet," Fuentes said.

Fuentes, who grew up in San Juan, Texas, the daughter of two Mexican immigrants, is working to inform older generations of the seriousness of coronavirus, with the campaign "Contain the Contagion" for the organization Promote Care, Prevent Harm.

"I know to some people it may seem like the world is ending, but I see it as a revolution for human rights," Fuentes said. "I see all of this as a revolution to be better. I think things will never go back to normal, because normal was never good."

This story appears in the Coronavirus feature series. View the full series.
A version of this story appeared in the May 1-14, 2020 print issue under the headline: Pandemic exacerbates pain at US-Mexico border.