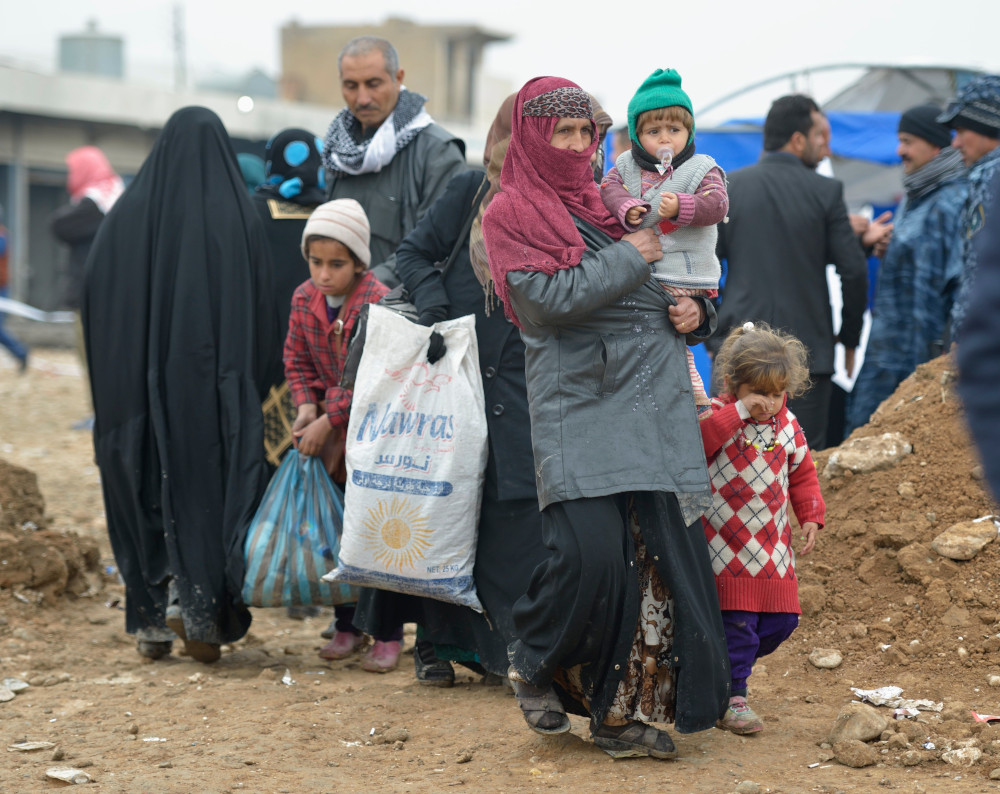 Displaced by fighting between the Iraqi army and the Islamic State group, a family leaves a processing center for displaced families Jan. 27, 2017, outside Mosul. (CNS/Paul Jeffrey)

Christians and others practicing their faith experienced serious challenges to religious freedom around the world this year, heightened by dangers posed by the coronavirus pandemic.

The challenges ranged from institutionalized practices to violent killings and kidnappings. Others saw threats to religious freedom in pandemic lockdown restrictions.

In Iraq, where Pope Francis is set to make a pilgrimage next March, pandemic conditions permitting, Catholic leaders have expressed grave concerns for the conflict-ridden country's brutally displaced Christians and other religious minorities, like the Yazidis.

About 150,000 Christians are left in Iraq; prior to a U.S.-led invasion in 2003, they numbered 1.5 million. Sectarian warfare followed, devastating the country's historic and diverse Christian communities and culminated in the takeover by so-called Islamic State militants of their historic heartland in the Ninevah Plain in 2014. Christians fled, threatened with conversion to Islam or death, while Yazidis faced genocide and sexual enslavement by ruthless Islamist militants.

Catholic Chaldean Archbishop Bashar Warda of Irbil has warned of "a growing loss of hope" among Christians. But he recently told the Catholic charity Aid to the Church in Need: "To have His Holiness come to visit us now may very well be the thing that saves us. Certainly, this visit will provide real strength and courage to the Iraqi Christians to remain in our homeland and rebuild here."

Warda and other church leaders have created numerous "anchor institutions" such as a hospital and university and rebuilt homes and businesses to help Christians remain in their ancestral homeland and maintain their historic presence in the Middle East, the birthplace of Christianity. But another one of Iraq's religious minorities' antagonists is Shiite militia groups, loyal to Iran, who have taken over Christian properties once occupied by Islamic State militants. 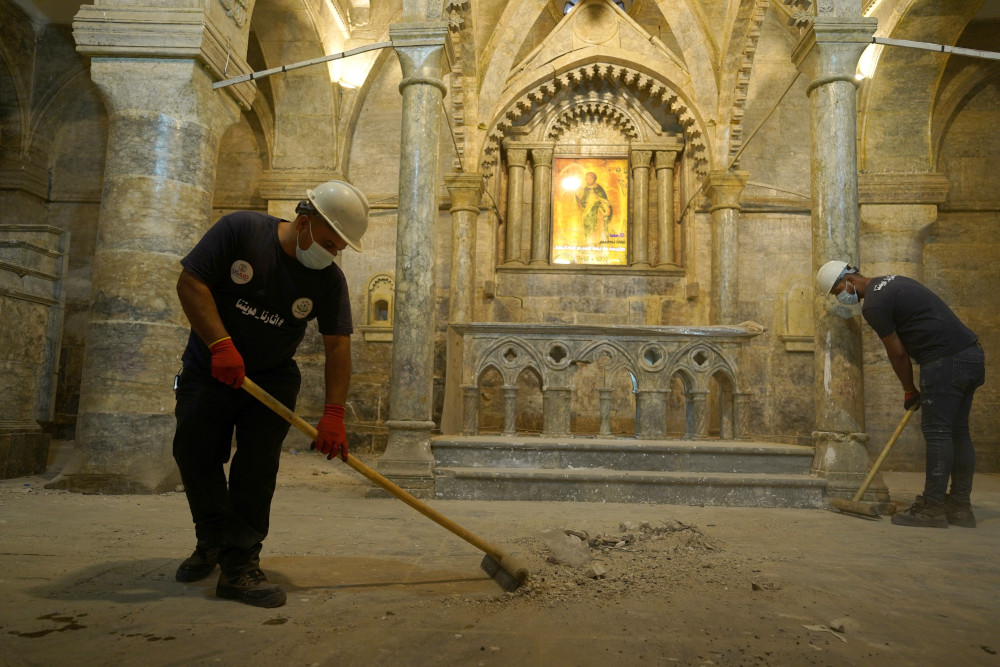 Volunteers clean the Syriac Catholic Church of St. Thomas in Mosul, Iraq, Oct. 28, 2020. News reports said the effort "seeks to sweep away the horrors" of three years of rule by Islamic State militants and welcome back members of minority faiths who fled IS. (CNS/Reuters/Abdullah Rashid)

The Vatican said one goal of Pope Francis' visit to Iraq was to comfort Christians who, amid wars and conflicts, have been forced to flee from Iraq and other Middle Eastern countries. In a tweet, Iraqi President Barham Salih said the trip would be "a message of peace to Iraqis of all religions & serve to affirm our common values of justice & dignity."

Although Iraq declared the defeat of the Islamic State in 2017, "threats, kidnappings, extortion and deaths still persist," Yonadam Kanna, a leading Iraqi Christian politician, said of the country's Christian minority.

The Islamic State genocide against religious minorities also took place in neighboring Syria, wracked by a decade of devastating conflict. Religious freedom advocates continue to sound the alarm, particularly over military incursions and attacks by Turkey and its Islamist militant surrogates terrorizing Christians and Yazidis in northeast Syria, as they did in the northwestern town of Afrin in 2018, closing down churches and hunting down Kurdish converts to Christianity. Turkish troops also have taken over Christian lands in northern Iraq this year.

Religious freedom concerns were not just found in the Middle East. The 2020 U.S. Commission on International Religious Freedom report found that the persecution of Christians, Sikhs and Hindus in Pakistan, for example, has not occurred mainly from individual actions, but has become institutionalized. The government's highly controversial blasphemy laws can carry a mandatory death penalty, in some cases, and are often used to settle personal grievances.

"The systemic enforcement of blasphemy and anti-Ahmadiya laws, and authorities' failure to address forced conversion of religious minorities, including Hindu, Christians, and Sikhs to Islam, severely restricted freedom of religion or belief," the report noted. It said that in September, at least 80 people were imprisoned in Pakistan for alleged blasphemy, with half of them facing life sentences or the death penalty. 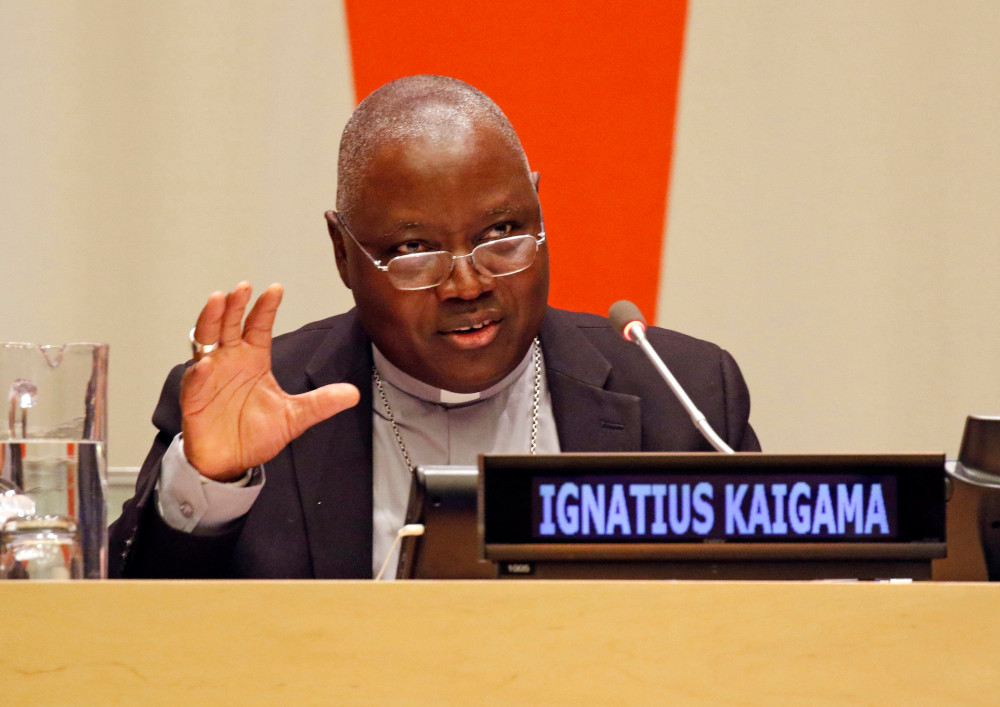 Archbishop Ignatius Kaigama of Jos, Nigeria, speaks during a forum addressing international religious freedom issues at the United Nations March 1, 2019. The event was co-sponsored by the Vatican's Permanent Observer Mission to the U.N. and the NGO Committee on Freedom of Religion or Belief. (CNS/Gregory A. Shemitz)

Meanwhile, the U.S.-based Christian Solidarity International warned of a possible genocide unfolding in Nigeria, a West African country of 206 million people. It pointed to "conditions for genocide that exist in Nigeria, with Christians, nonviolent Muslims, and adherents of tribal religions being particularly vulnerable," and called on the U.N. Security Council to take action.

Pope Francis urged prayers for Nigeria after a group of militants killed more than 100 farmworkers on Nov. 28 in the country's northeast Borno state. The incident marks the most violent attack on civilians in Nigeria this year and was believed to have been carried out by Boko Haram or an Islamic State affiliate. Islamist insurgents have been responsible for at least 30,000 deaths over the past several years.

Kidnappings of Catholics are a worrisome trend, not only involving priests and seminarians, but also faithful laity, according to Archbishop Ignatius Kaigama of Abuja, Nigeria. Father Matthew Dajo, a priest from the archdiocese, was freed Dec. 2 after his abduction Nov. 22. Other Catholic leaders have complained that Christians in Nigeria find it difficult to secure land to build churches, whereas most mosques receive state funding.

In a November report, the Washington, D.C.-based Pew Research Center found that threats to religious freedom continue to rise worldwide. It also recorded the highest level of government restrictions in 2018 on religion since it started tracking these figures in 2007 and found China to be the biggest perpetrator of government restrictions out of all 198 countries in the study. 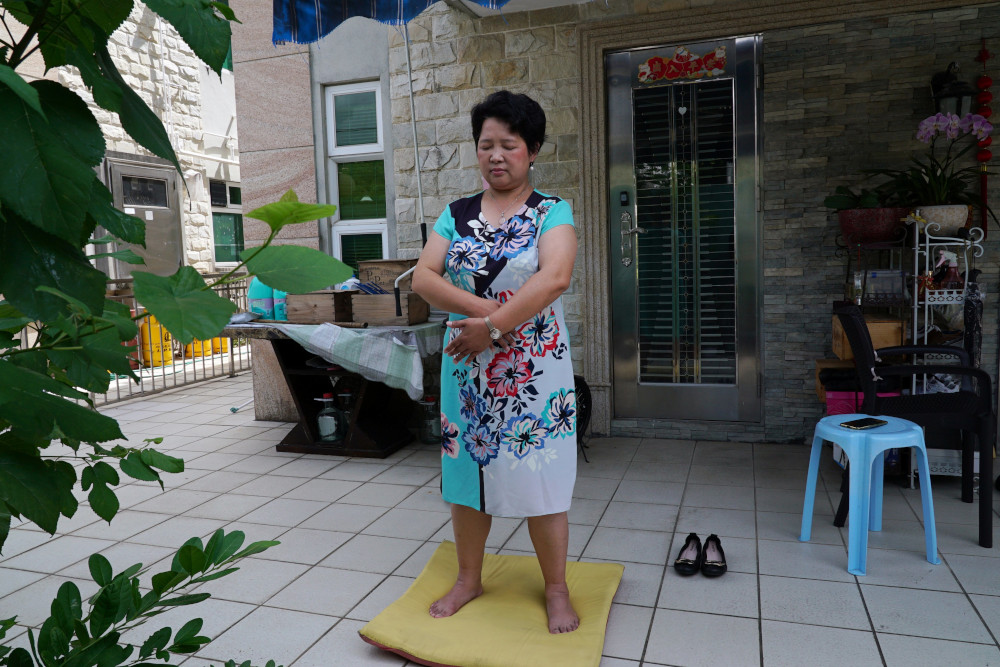 Yang Xiaolan, a Falun Gong practitioner who fled from mainland China, practices Falun Gong on her patio during an interview July 2, 2020. Christians and others practicing their faith experienced serious challenges to religious freedom around the world this year, heightened by dangers posed by the COVID-19 pandemic. (CNS/Reuters/Pak Yiu)

"In 2018, the [Chinese] government continued a detention campaign against Uighurs, ethnic Kazakhs and other Muslims in Xinjiang province, holding at least 800,000 [and possibly up to 2 million] in detention facilities" designed to erase religious and ethnic identities, the U.S. State Department report said.

"China, a Communist, atheistic government, is now seeking to put its will down front and center on the people and to force it [with either people] going into a detention facility or being in a virtual police state where there are cameras watching all the time and [there is] limitation of movement," said Sam Brownback, ambassador at large for international religious freedom at the U.S. State Department.

"We don't want a world where you are limited by your government as to what you can do with your faith," Brownback told the Washington, D.C., Religious Freedom Institute webinar Dec. 10.

Chinese Christians, including Catholics, have expressed concerns about church demolitions by government authorities. In addition, soon after the pandemic began to spread early in the year, some local governments in northern China shut down churches of communities not registered with the Catholic Patriotic Association. Authorities claimed this was to control COVID-19.

Meanwhile, Catholic and other church leaders in Europe and America challenged the size limit imposed by their governments on prayer services due to health concerns posed by the coronavirus pandemic.

Bishop Matthieu Rougé of Nanterre, a city near Paris, said some of the restrictions go against something that is sacred to observant Catholics.

"Catholics in France suffer from not being able to come together for this essential moment: the Sunday Mass. Many do not understand that it is possible to shop in a supermarket filled with buyers and that it is forbidden, at the same time, to meet in our churches in strict compliance with health precaution rules," Rougé told Voice of America.

Coverage of international religious freedom issues by Catholic News Service is made possible in part by Aid to the Church in Need-USA (www.acnusa.org).