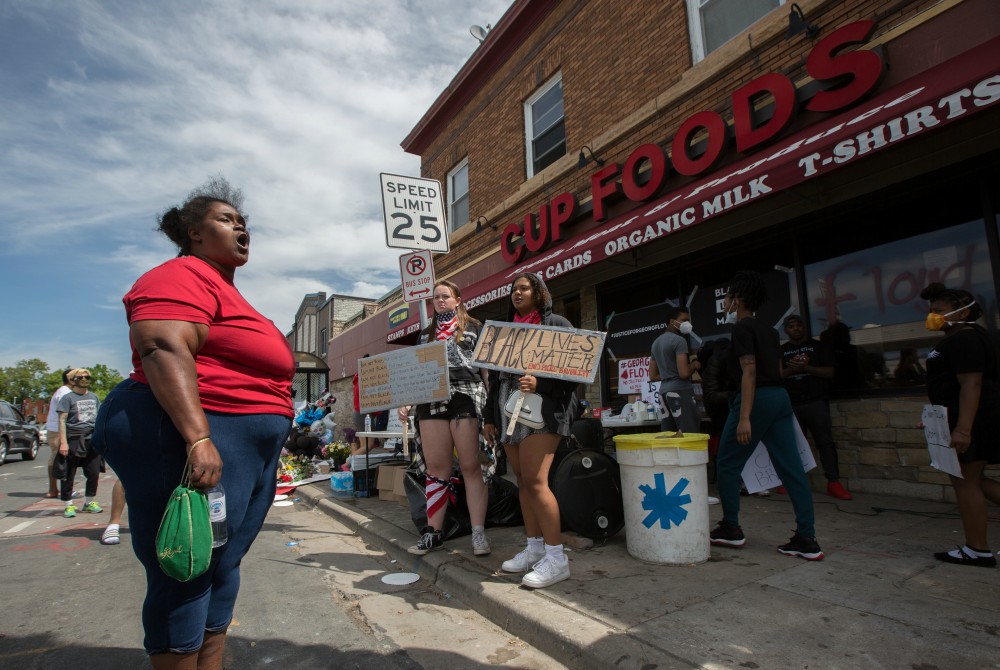 A woman in Minneapolis expresses her anger and frustration May 28 at the site where George Floyd was pinned down May 25 by a police officer. Floyd later died at a local hospital. (CNS/The Catholic Spirit/Dave Hrbacek)

In the wake of the killing of George Floyd, a 46-year-old handcuffed black man, local leaders in St. Paul and Minneapolis describe a Catholic community in anguish, a situation made worse by its inability to gather in person amid a global pandemic.

"I wish I could say we're out there and we have the church wide open," said Fr. Jim DeBruycker, pastor of St. Joan of Arc Catholic Community in Minneapolis. "But we don't even have it open for our congregants right now because of the COVID virus, and we probably won't for a couple months."

In normal times, pastors say, their churches would be places for grieving or even organizing in response to tragic events like Floyd's death. But these are not normal times, and local Catholic communities are finding other ways to show support and solidarity in the face of the pandemic.

St. Joan of Arc is located in the Regina neighborhood in South Minneapolis, just a few blocks off of Chicago Avenue where Floyd was killed. DeBruycker described the area as diverse, largely working class and, overall, "a peaceful, beautiful place to live."

Recently, however, South Minneapolis has garnered national attention for violent reasons. On May 25, a Minneapolis police officer killed Floyd by kneeling on his neck for multiple minutes during an arrest related to a counterfeit $20 bill. A video of the killing soon went viral, sparking national outrage and local demonstrations that eventually turned to riots the evenings of May 27 and 28.

Having lived in the area for more than 30 years and witnessed how police have treated people of color in the community in the past, he said that he wasn't necessarily surprised by what happened. There have been incidents in the neighborhood before, he said, where things have gone wrong in a raid and people were hurt in the heat of the moment. But Floyd's death and its graphic video are different.

"That was not heat of the moment. That was almost premeditated," DeBruycker said. "That's frightening."

DeBruycker told NCR that some individual parishioners and staff members have been attending the local protests, but St. Joan of Arc, a parish known locally for its commitment to social justice, is unable to host any physical gatherings in response to Floyd's killing due to safety concerns about the coronavirus. Instead, the parish will be hosting an online prayer service June 2.

Fr. Erich Rutten, pastor of St. Peter Claver Catholic Church, a historically black parish in St. Paul, said that his parishioners were "very angry and hurt." While parish leadership were discussing possible ways of responding to the incident, Rutten told NCR May 27 that no decisions had been made yet.

Later that day, Rutten sent a video message to his parishioners with a statement on the killing, saying: "I am saddened, I am sickened, I am angered and I am tired. I'm tired of such things happening again and again. How long, oh Lord, must we endure such things?"

Floyd's death comes after a series of racist incidents in the past several weeks that have triggered anger and unrest around the country.

In early May, video that showed Ahmaud Arbery, an unarmed 25-year-old black man, being fatally shot by two white men while out jogging went viral, sparking a state investigation and the two men's arrest.

And just earlier this week, another viral video of a white woman calling the police on a black male bird watcher in New York City's Central Park has led to national dialogue over underlying racism and dangerous attitudes toward black men in this country.

In Minnesota, too, it's been just four years since the Twin Cities were shook by the death of another black man at the hands of a police officer, an incident that similarly triggered Black Lives Matter demonstrations around the country. In 2016, Philando Castile, a 32-year-old black man, was pulled over in Falcon Heights, Minnesota, and shot to death by a police officer.

Although he was Baptist, Castile's funeral was held at the Cathedral of St. Paul in St. Paul. In a statement made at that time, St. Paul and Minneapolis Archbishop Bernard Hebda said the archdiocese was honored to host the "ecumenical service at which our community could unite with [Castile's] family to pray for peace and reconciliation."

Four years later, Hebda is once again asking the Catholic community to pray, this time for Floyd and his family.

In a May 27 statement on Floyd's death, Hebda said the video was "gut wrenching and deeply disturbing." He also called for "a full investigation that results in rightful accountability and veritable justice."

The Sisters of St. Joseph of Carondelet of the St. Paul Province similarly called for "our criminal justice systems and law enforcement agencies to pursue accountability and realistic alternatives to the use of deadly force."

"Sadness, frustration, fear, and anger are but a few of the disquieting emotions resulting from the egregious fatal arrest of George Floyd of Minneapolis," the sisters wrote in in a May 27 statement.

Derek Chauvin, the officer who pinned down Floyd, and three other officers involved in the incident have been fired in the days since the killing. While some community leaders have applauded the swift action, many people, including Minneapolis' mayor, Jacob Frey, are also calling for arrests of the officers. Frey has also requested the FBI conduct a civil rights investigation into the case.

Chauvin was arrested May 29 and charged with third-degree murder and manslaughter, Hennepin County Attorney Mike Freeman announced in a press conference.

Estelle Jones, 75, an African American woman from St. Paul and a parishioner of St. Peter Claver, said, "Everybody wants to see those police officers prosecuted."

Jones told NCR that the African American community in the Twin Cities has not had a positive relationship with the police historically. The Floyd killing has reopened many old wounds, she said, including her own.

In 2015, Jones and her family watched as police "brutally attacked" her grandson, and she and her daughter begged the officers not to kill him. (Her grandson died in a car accident in 2018.)

"Black people have been going through this for many, many, many years, and now this type of racism is just right out in the open," she said. "This is like a lynching done right in front of you."

Jones doesn't plan on protesting or demonstrating because of her age and concerns about the coronavirus. And while she may not be able to gather in person with her fellow parishioners, she said that staying connected virtually with her church community is helpful at times like this "because we're still together."

Moving forward, Jones said she'd like Catholics to continue working on confronting racism within the church. But right now, as the community processes Floyd's death, she's not sure what else they can really do at this point "but be there for each other and have strong prayers toward this."

Fr. Dale Korogi, pastor at the Church of the Ascension in Minneapolis, who was also born and raised in the city, told NCR he sees the video as "the affirmation of a system and a society that allows such heinous acts to happen."

There's a well-known phrase in the area called "Minnesota nice," Korogi said. That phrase, however, can give an idyllic impression of the region that "we're all getting along really well."

"The church and its leaders have to find a voice and say that not everything is well," he said. "So, let's sit down and talk and listen and practice what we preach." That includes "speaking out against racism in all of its forms," as well as finding more ways for the church to come together to work on issues of racism on a united front.

Like other churches, Church of the Ascension won't be able to hold any in-person gatherings related to Floyd's death. Korogi will instead be posting online video reflections and discussing the incident in Mass this weekend.

Like other local pastors, his mind is focused steadfastly on his community, especially the many young boys of color who attend the parish's Ascension Catholic School, and the trauma they'll endure from seeing the image of Floyd's limp body pinned face down on the street.

"Every day we speak to them about being beloved children of God, with all the respect and dignity that means," he said. "And then to have this experience in front of them — I don't know how their young hearts and minds respond."

Read this next: Editorial: What have you done? No accounting for deaths of Floyd, Taylor and Arbery

Story updated May 29 at 4:45 p.m. ET to note Derek Chauvin was arrested and charged with third-degree murder and manslaughter.

A version of this story appeared in the June 12-25, 2020 print issue under the headline: Pandemic hinders Catholic response to Minneapolis killing.