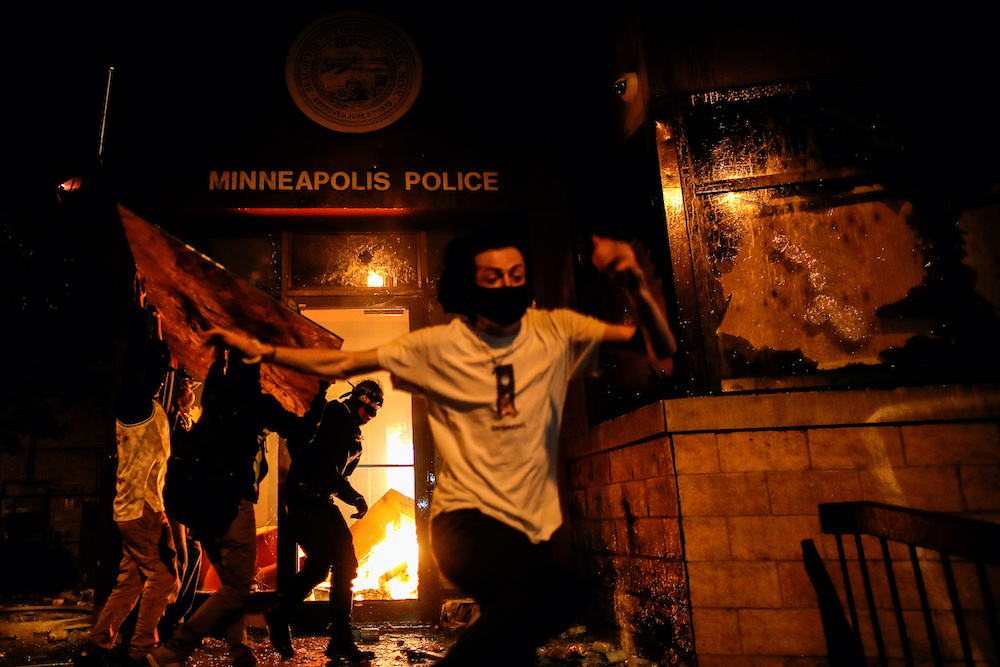 The entrance of a police station in Minneapolis is on fire May 28, as demonstrations continue after a white police officer was caught on a bystander's video pressing his knee into the neck of George Floyd, an African American, who later died at a hospital. (CNS/Reuters/Carlos Barria)

There is no accounting for the death of George Floyd. A person, a reflection of God's very image, senselessly killed, murdered.

A 46-year-old father of two daughters, stopped in Minneapolis over a report of someone nearby having tried to use a counterfeit $20 bill at a local store. Brutally held to the ground by a police officer's knee for about eight minutes, while others watched. His last words a repeated gasp, a begging for help: "I can't breathe. I can't breathe."

"What have you done? Your sister's blood cries out to me from the ground!"

There is no accounting for the death of Breonna Taylor. A person, a reflection of God's very image, senselessly killed, murdered.

A 26-year-old emergency medical technician in Louisville, Kentucky, sleeping in her apartment one March night when police enter without warning in a botched narcotics raid. After her boyfriend shoots an officer in the leg, Taylor is killed in the crossfire. Her last words are unknown.

There is no accounting for the death of Ahmaud Arbery. A person, a reflection of God's very image, senselessly killed, murdered.

A 25-year-old former high school football star, chased down by two men during a run in his Georgia neighborhood in February. His last sounds an unintelligible shout as he struggles to prevent his assailants from shooting him, before being killed at point-blank range.

There is no accounting for these deaths, or the unknown multitude of other African Americans whose deaths by police were unfilmed or otherwise unrecorded by history.

God's question to Cain repeats and repeats. All this has happened before, and all this will happen again. Who will wedge something in the gear of the machine to stop it going round and round?

So much has been said in recent months about the rending of the fabric of the nation. The images on our screens are devastating.

A police station set on fire in Minneapolis, retribution (justice?) for Floyd's death. Demonstrators, wearing pandemic face masks, arrested in New York's Union Square. Colorado's state capital put back into lockdown, this time not over a virus but because someone fired a gun at a demonstration. A driver in Denver purposefully running over a protester.

A president so detached from any sense of decency that he threatens on Twitter that "when the looting starts, the shooting starts."

And bishops. What bishops? Not a single word from the national conference on any of these deaths. Worse perhaps was St. Paul-Minneapolis Archbishop Bernard Hebda's May 27 statement on Floyd's killing. It did not even mention racism, and used the phrase "all lives are sacred" — an uncomfortable parallel to the "all lives matter" retort to the Black Lives Matter movement.

While the dignity of all human life is a core Catholic principle, there is no other word than shameful for the archbishop's echoing of a phrase used to downplay the systemic violence African Americans endure every day.

Who will put the wedge in the machine?

What have you done? What will you do?

A version of this story appeared in the June 12-25, 2020 print issue under the headline: No accounting for these deaths.