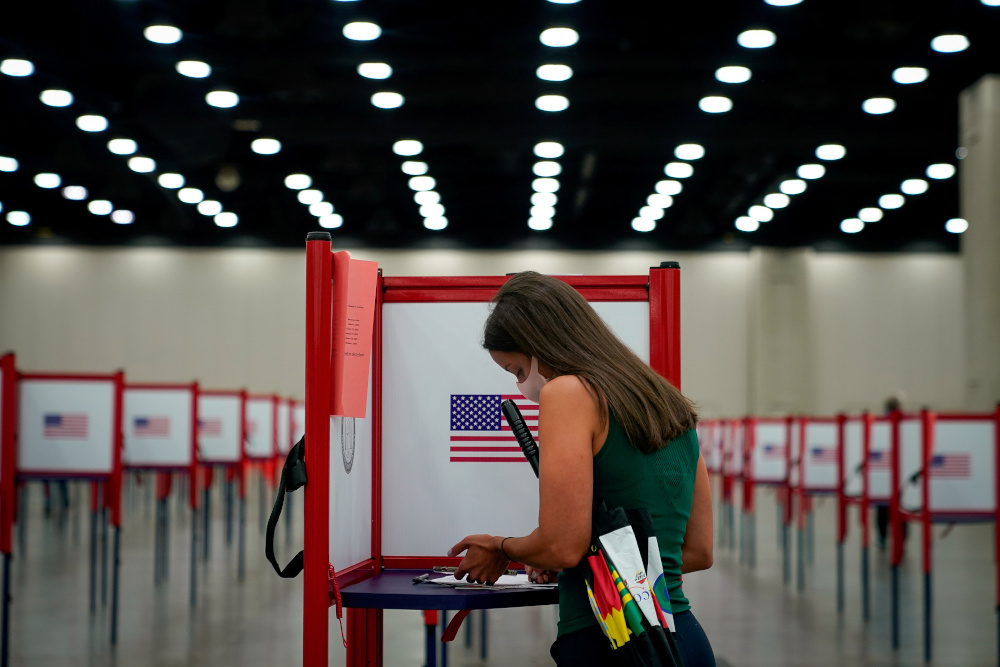 A woman in Louisville, Ky., votes during the primary election June 23, 2020, during the coronavirus pandemic. (CNS/Reuters/Bryan Woolston)

The combination of concern over government response to COVID-19 and the economic collapse brought about by the pandemic with the national reckoning over racism following the death of George Floyd in police custody in Minneapolis has found Catholics sharing in a public mood that has decidedly soured on politics, according to a panel of speakers.

Data presented at July 10 online seminar, "Faith and the Faithful," sponsored by the Initiative on Catholic Social Thought and Public Life at Georgetown University, indicates that President Donald Trump's support among Catholics, just about three months away from Election Day, has eroded.

For the April-June period, while the Pew survey results indicated a national lead by former Vice President Joe Biden, a Catholic, 54% to 44%, Catholics still favored Trump 52% to 47%.

Broken down in detail, however the results show that Trump's support has slipped even among his core voters, white evangelicals, from 78% to 72%.

For white Protestants who don't identify as evangelicals, support dwindled from 62% to 56%, and for white Catholics, 60% to 54%. Among Hispanic Catholics surveyed, Trump support went from 28% to 23%, and among Black Protestants, it dropped from 21% to 12%.

Further, Smith observed, "All three of those groups supporting Trump are declining as a share of the total population." The increasingly larger share of the base supporting the Democratic Party has been those with no religious affiliation.

"It's worth recalling," said John Carr, director of the Institute, that five months ago, Trump was acquitted by the U.S. Senate of the House's impeachment charges against him and Biden finished fifth in the New Hampshire Democratic primary. Since then, "unprecedented videos" of police brutality aimed at Black men has led "to a national reckoning on racism," said Carr.

Why the support for Trump among white Catholics, Carr asked, "when his character and policies are inconsistent with Catholic values?"

"An addiction to power," said Justin Giboney, an attorney and political strategist based in Atlanta. "Just not being able to let go of being in control. Putting winning before the witness, and it's really short-term thinking. We have to send the right message way before we worry about winning."

At the intersection of faith and politics, "white evangelicals are beginning to come to terms with the relationship in 2016 that they came to with Trump," said Washington Post columnist Michael Gerson. They had "a belief that modernity had turned against them."

With Trump, they "bought into the notion of a strongman protecting their political interests," which has brought "huge social costs." Now, "I think there's significant sobering going on," he added.

"At a moment like this, it's very easy for us to revert into fear," said Jeanne Lewis, a board member of Faith in Public Life and a member of St. Augustine Catholic Church in Washington. This "requires a level of discernment and a deep seeking of what is true."

"The political right's anemic stance on racial issues, I think has become embarrassing," Giboney said. "The way Republicans have allowed Trump to manipulate racial issues has been shameful."

Giboney thinks voters are now seeking "leadership outside of the generic conservative and generic progressive molds."

"They feel as though for the past half-decade ... there has been a growing hostility to people of faith," said Gabby Orr, a White House reporter for Politico. "They're looking for somebody who will simply be an attack dog — a defender."

Gerson called Biden "a bit of a throwback, because he actually cares what religious leaders think" and also "has the advantage of speaking about faith in terms of a personal perspective."

According to Gerson, the former vice president, who as a Catholic supports keeping abortion legal, could make an appeal "to a broadly religious audience."