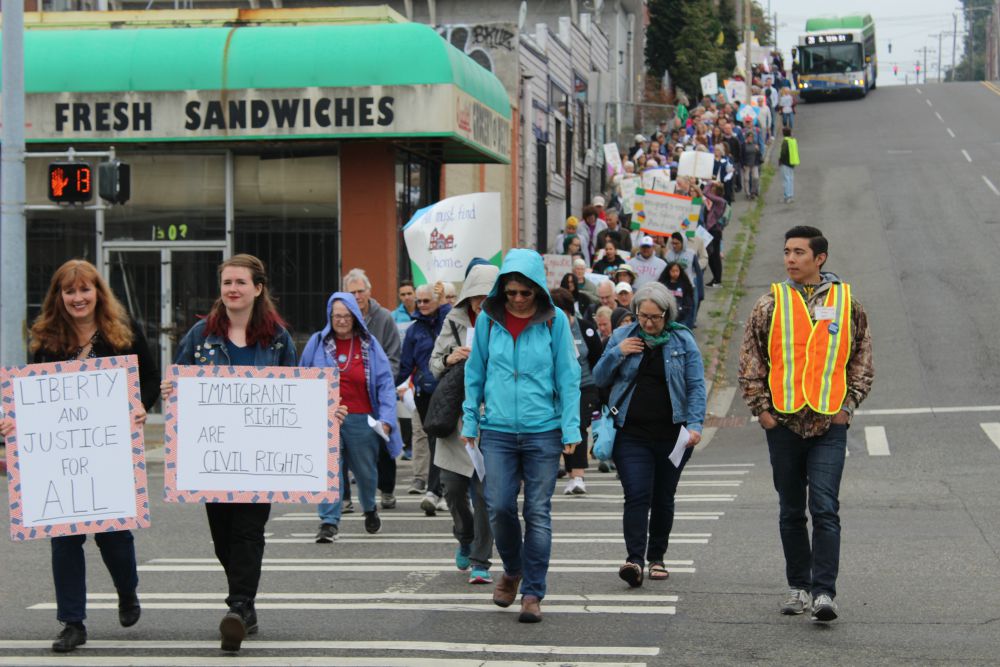 An estimated 500 persons walked 1.6 miles from Tacoma, Washington's St. Leo Church to the Northwest Detention Center in Tacoma as sign of solidarity with immigration detainees and their families. The event was coordinated by Western Washington's two Jesuit parishes, St. Joseph in Seattle and St. Leo. A bilingual Mass was celebrated outside the facility. (Jennifer Hiam)

To express solidarity with refugees and immigrants, on Aug. 25 an estimated 500 pilgrims walked 1.6 miles from Tacoma, Washington's St. Leo the Great Parish to Northwest Detention Center, where nearly 1,575 persons, the Tacoma facility's capacity, are being held pending review of immigration status and/or pending deportation.

Sponsored by the Seattle Archdiocese's two Jesuit parishes, St. Leo and Seattle's St. Joseph, the trek culminated at the center with an outdoor Mass. Concelebrants were Jesuit Frs. Matt Holland and John Whitney, pastors of St. Leo and St. Joseph, respectively. The homilist was Fr. Scott Santarosa, provincial of the Jesuits West Province. In his bilingual homily, Santarosa underscored Christians' "history as immigrants, as refugees, as aliens."

He told worshipers that two days earlier "170 people inside these walls … finished their own hunger strike in protest of U.S. detention policies which separate families." A press release from Immigration and Customs Enforcement (ICE) denied the existence of a hunger strike or work stoppage. One organizer of the action, Vince Herberholt, provided NCR a link to photos of the event.

Prior to the event, St. Joseph Parish had initiated a petition critical of U.S. immigration policy. The two Western Washington Jesuit parishes received support for the event from the national Ignatian Solidarity Network (ISN) as well as from many regional congregations and organizations. In an Aug. 22 media release, the Ohio-based ISN outlined multiple grass-roots events, programs and other efforts across the country aimed at immigration reform.

Apparently a significant number of the 640,000 parishioners' eyebrows in the Diocese of San Jose, California, were raised following the Aug. 26 report of Bishop Patrick McGrath's purchase of a $2.3 million, five-bedroom retirement home in San Jose's desirable Willow Glen neighborhood. According to the Zillow real estate website, the median home value in San Jose is $1,110,800. Home values there have gone up 23.5 percent over the past year. Zillow predicts they will rise 15.7 percent within the next year and reports the median list price per square foot in San Jose is $654. Responding to the outcry, in an Aug. 27 statement, McGrath announced that he would not move into the house, but will instead live in a rectory at a parish when he retires. "I erred in judgment in the purchase of a 5-bedroom home for $2.3 million," McGrath said. "I failed to consider adequately the housing crisis in this valley and the struggles of so many families and communities in light of that crisis." He said that the diocese would put the house up for sale, with proceeds going to Charities Housing, a division of Catholic Charities of Santa Clara County.

While active participation in a faith life has long been debated as a tool for a longer life, a recent Ohio State University study hints that volunteerism is a related factor. The researchers pored over hundreds of obituaries to gather data, concluding that persons who are members of faith communities appear to live more than four years longer than those who are not. 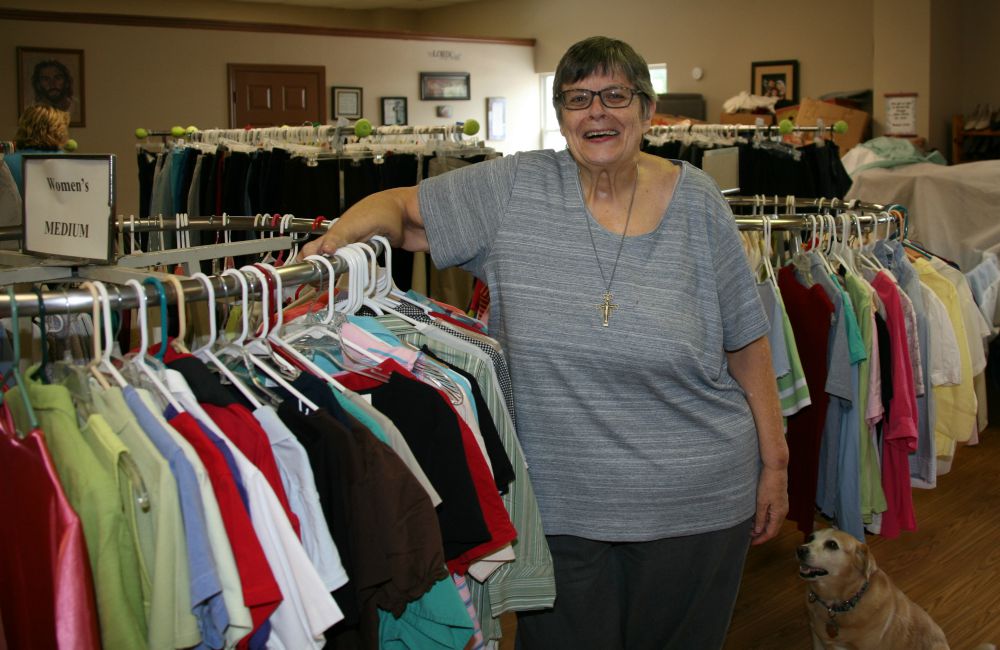 Sr. Therese Carew, a Franciscan Sister of the Sacred Heart of Frankfort, Illinois, told NCR recently that developing nations-type realities can be experienced in Mingo County, West Virginia, where the decline in coal mining has left the area with little employment, scarce opportunities, an opioid epidemic and grinding poverty.

Carew directs Christian Help, Inc., a non-denominational ministry in Kermit, West Virginia, that for a quarter century has provided clothing, food, furniture, household items and, when possible, financial assistance to help with utilities, rent, medication, gasoline, propane and kerosene. It was recently featured in The Catholic Spirit, the newspaper of the Diocese of Wheeling-Charleston.

Nearly 200 YMCAs, college entities and religious congregations — including many Catholic parishes — support the work of the non-denominational homeless ministry Room In The Inn in Nashville, Tennessee. With roots in the city's Holy Name Parish dating to 1986, Room In The Inn's core outreach is providing shelter and nourishment during the winter months, Dec. 1 through March 31. 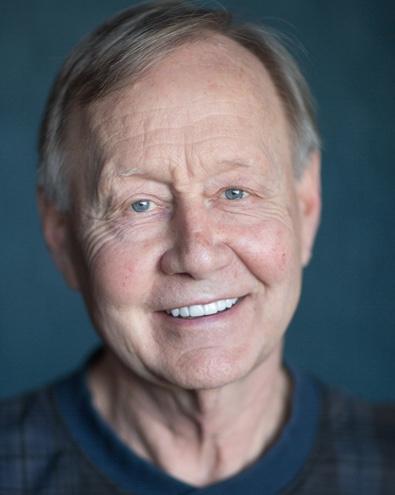 During the winter season on any given night, 10 to 15 host sites provide meals, movies, fellowship and shelter to 12 to 14 guests. From Dec. 1, 2016, through March 31, 2017, Room In The Inn recorded 16,834 overnight accommodations for 1,490 different people. Hosts provide transportation to and from their sites. Nearly 7,000 volunteers take part. The organization now also makes essential services available year-round at its activity center.

An off-shoot of Room In The Inn was started eight years ago in Memphis.

Founder of Room In The Inn, Charles Strobel, will be presented the 25th annual Joe Kraft Humanitarian Award from the Community Foundation of Middle Tennessee in November.