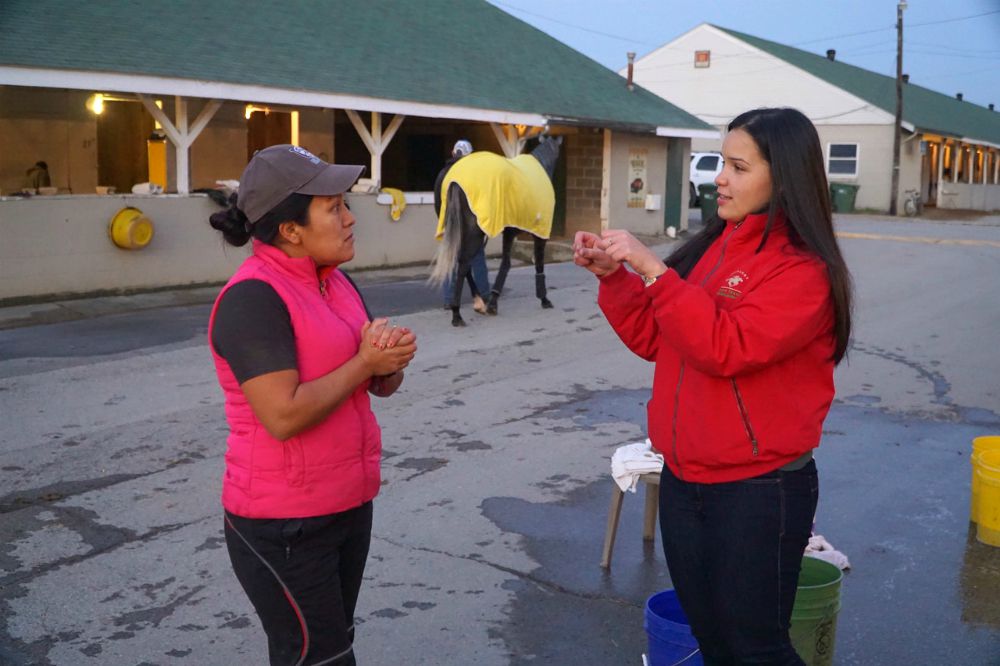 Daisy Baez, right, an associate chaplain at Christ Chapel that serves Churchill Downs, talks with a woman at Churchill Downs in Louisville, Kentucky, home to the Kentucky Derby and the work site for hundreds in the sport's "backside." (CNS/The Record/Jessica Able)

The Kentucky Derby — won this year by Justify on May 5 — looks much different to those working on the "backside" of Churchill Downs than to the vast global audience who watched the world's most famous horse race. About 30 churches volunteer time and resources to minister to the hundreds of race track workers, many of them from Central America.

At least four Catholic parishes are among that 30 congregations supporting Christ Chapel, officially sponsored by the Kentucky Race Track Chaplaincy. Three of the parishes are in Louisville — Epiphany, Our Lady of Lourdes and St. Edward — and one, St. Gregory the Great, is in Samuels, Kentucky.

St. Sava Serbian Orthodox Cathedral of New York City filed suit April 30 against Church Mutual Insurance Company, claiming the insurer woefully underinsured the congregation, leaving it $47 million short of being able to reconstruct the iconic Manhattan church following the May 1, 2016 fire that destroyed the 160-year-old structure. The church website carries a pastoral letter from the cathedral's dean and a press statement about the litigation. 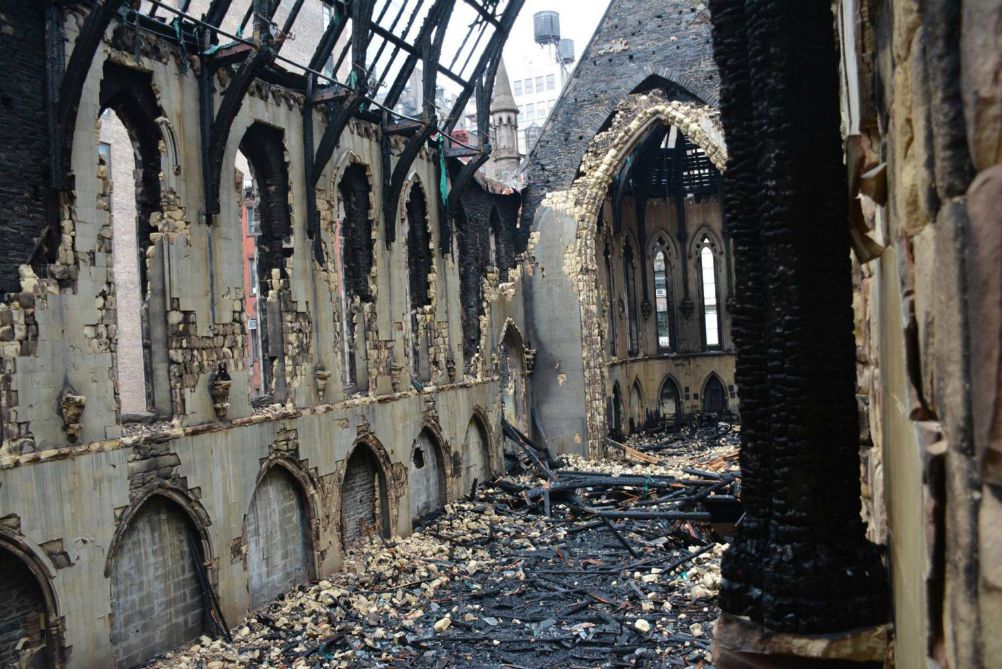 Artist Donna Slade, a member of Church of the Nativity in Dubuque, Iowa, teamed with a young member of Dubuque's Tri-State Islamic Center, Fayez Alasmary, and the Center's imam, Adib Kassas, to create intricate Arabic calligraphy now featured on the arch above a central point of the mosque's worship space. The lettering is a verse from the Quran, the Muslim holy book. The idea of Fr. Alan Dietzenbach, parochial vicar at St. Raphael Cathedral and St. Patrick Parish, the art was presented as a gift to the center from the Catholic parishes of Dubuque. 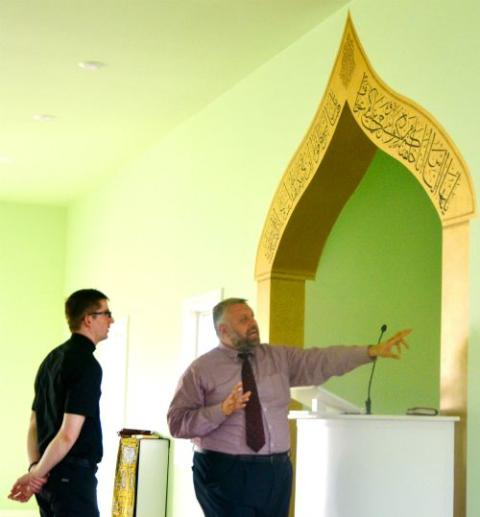 Fr. Alan Dietzenbach, left, and Adib Kassas, acting imam at the Tri-State Islamic Center in Dubuque, Iowa, speak about Arabic calligraphy and the decoration around the arch. (CNS/The Witness/Dan Russo)

The 11th step in Alcoholics Anonymous' well-recognized 12-step program emphasizes the pursuit of "conscious contact with God" through prayer and meditation and seeking "knowledge of His will for us and the power to carry that out." Thus, the "11th Step Retreat" title of the annual gathering for recovering alcoholics, their friends and families at St. Meinrad Archabbey, a Benedictine monastery in southern Indiana. The ninth such retreat will take place July 13-15 with a theme of "The Joy of the Journey." Presenters will include John A. MacDougall, Ph.D., author of Being Sober and Becoming Happy, and Franciscan Fr. Richard Rohr, author of Breathing Under Water.

Just about any day can be Mother's Day for midwife Carissa St. Onge Carneiro, reports Katie Scott in The Catholic Sentinel, newspaper of the Portland, Oregon, Archdiocese. With a wide range of experience and education, including a master's degree in nursing, St. Onge Carneiro has been captivated since her teens by the accompaniment of mother and child at childbirth. A member of Holy Trinity Parish in Beaverton, Oregon, the 40-year-old mother of three "dreams of one day being part of an out-of-hospital birth center that builds community and serves the poor and those in need from all backgrounds," wrote Scott. Sidenote: St. Onge Carneiro attended the birth of reporter Scott's second son in last fall.

Speaking of childbirth and motherhood, Mary Haseltine has written a book from a Catholic perspective on her experiences as a certified birth doula and mother of five boys: Made for This: The Catholic Mom's Guide to Birth. Haseltine resides in the Buffalo Diocese.

A special "quasi parish" to serve the thousands of people of Hmong heritage in the Diocese of La Crosse, Wisconsin, is scheduled to be up and running by the end of the year. Located in Wausau, it will be named Mary, Mother of Good Help. Hmong people first started arriving in the U.S. in significant numbers following the end of the Vietnam War and also as a result of civil strife in Laos where the Hmong are an ethnic minority. 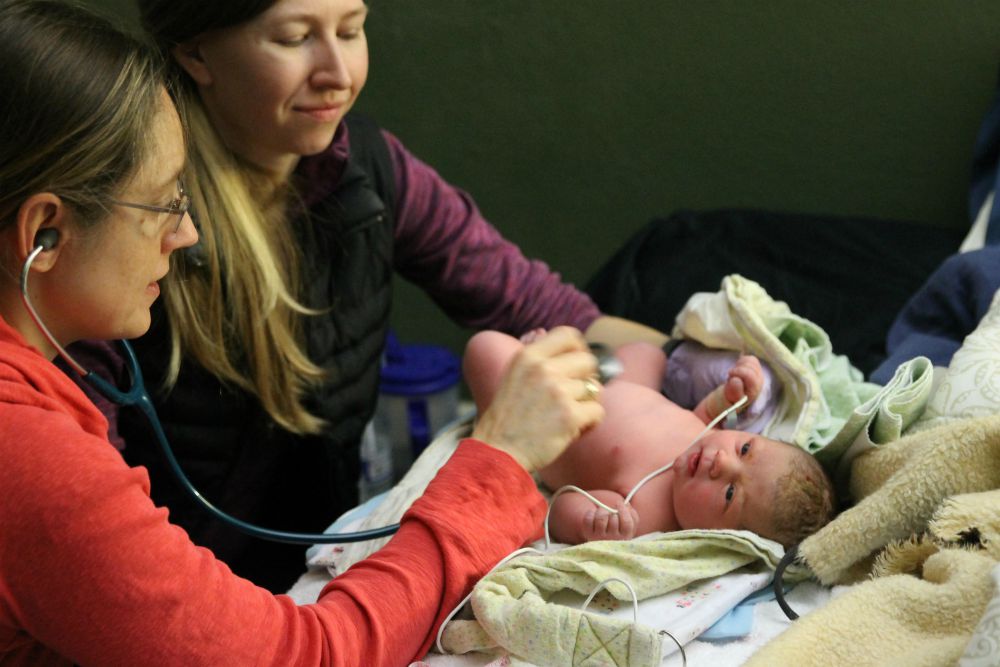