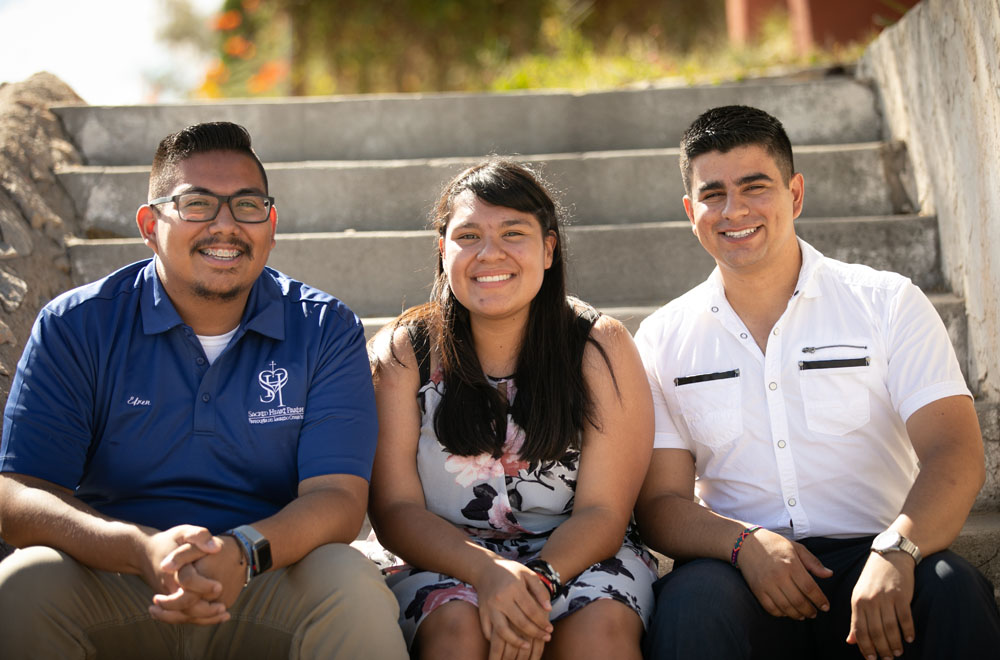 "Dreamers" Efren, Mariana and Sebastian from the Diocese of El Paso, Texas, pictured in a late August photo, are finalists for the 2018-2019 Lumen Christi Award given by Catholic Extension. (CNS photo/Rich Kalonick, Catholic Extension)

In his homily at the five Sept. 8-9 weekend masses at Holy Spirit Parish in San Jose, California, pastor Fr. Brendan McGuire shared that he had been abused as an 18-year-old by a priest. The San Jose Diocese's vicar general for special projects, McGuire had kept the abuse a secret for 35 years. Standing ovations followed three of the homilies, and "thunderous applause" marked the other two.

McGuire told Catholic News Service that since that weekend, he had heard from nearly four dozen men who had been sexually abused, five of whom were priests.

For the past three years Holy Family Parish in Lawton, Oklahoma, has focused its annual Lenten project on outreach to Syrian refugees through gifts to the Catholic Near East Welfare Association. CNEWA's work in the Middle East was described during talks at masses at several parishes in Western Washington state in September, including Holy Disciples in Puyallup and Our Lady of Good Counsel in Eatonville.

Three young people with Deferred Action for Childhood Arrivals status (or "Dreamers") -- Efren, Mariana and Sebastian -- from the Diocese of El Paso, Texas, are among finalists for Catholic Extension's 2018-19 Lumen Christi Award which annually "honors an individual or group who demonstrates how the power of faith can transform lives and communities," reports Catholic News Service. Efren, 20, is a parishioner of Sacred Heart Church, a Jesuit parish just yards from the border in El Paso's Segundo Barrio neighborhood. Efren coordinates religious education for youth.

Mariana, 17, attends El Paso's Our Lady of Assumption Church and is a youth minister, altar server and catechist. She hopes for a career in law enforcement.

Diocese of Charlotte, North Carolina, parishioners have been asked to support a special collection for relief efforts following Hurricane Florence which struck the area earlier this month. 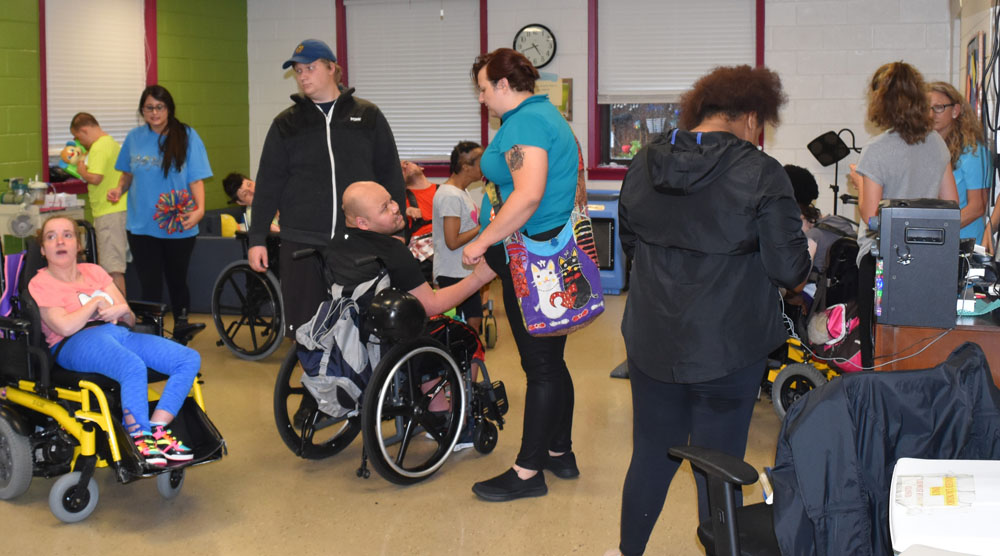 Residents of Carobell, a home for people with intellectual and developmental disabilities in Jacksonville, North Carolina, take refuge Sept. 16 at Holy Angels in Belmont after Hurricane Florence forced them from their home. Forty-six residents and staff of Carobell left the small town of Hubert Sept. 12 in a caravan of 11 vehicles, slowly making the 260-mile trek to Holy Angels, their designated emergency safe site. (CNS/Courtesy of Holy Angels)

Fleeing Florence's destructive winds and rains, a large group of medically fragile North Carolinians found refuge and welcome at Holy Angels, a home for persons with intellectual and developmental disabilities in Belmont, North Carolina, operated by the Sisters of Mercy.

As a symbol of courage and inspiration, a monstrance resurrected from Hurricane Katrina-generated mud in 2005 is going to visit U.S. communities still reeling from disasters of 2017 — Houston (Hurricane Harvey); Las Vegas (the deadliest mass shooting in modern U.S. history); and Santa Rosa, California (wildfires destroyed 5,000 homes in Sonoma County). Known as "Hope Monstrance," the ostensorium was buried in mud and debris when Katrina flooding overwhelmed the free-standing chapel of St. Dominic Parish in the Lakeview neighborhood of New Orleans. Parishioner Susie Veters had removed the Blessed Sacrament as a well-planned precaution. 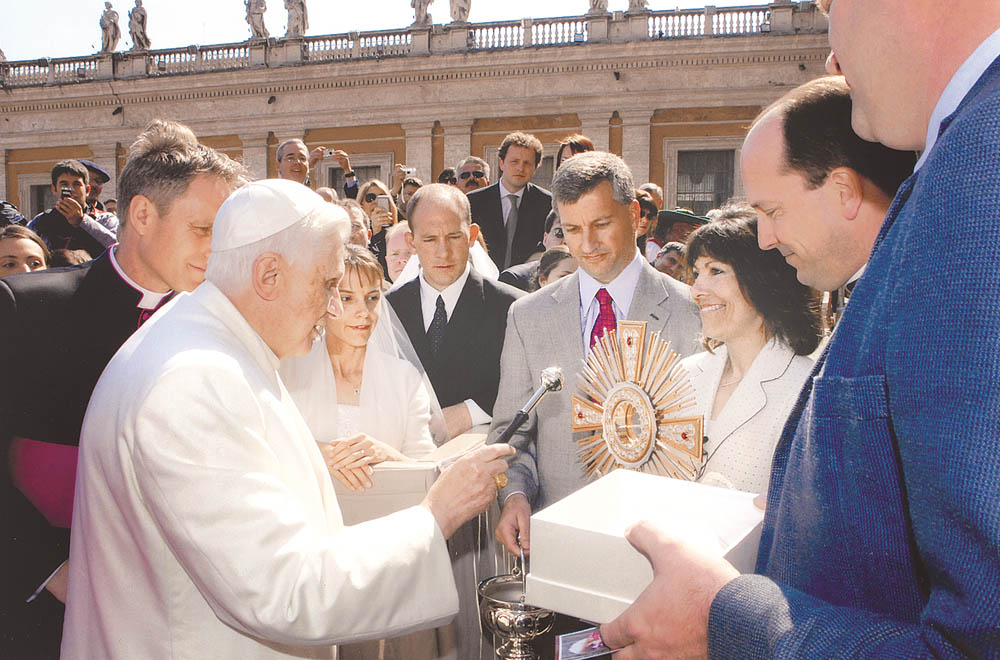 After his weekly general audience in the Vatican's St. Peter's Square March 15, 2006, Pope Benedict XVI blesses the Hope Monstrance, recovered from the mud left behind by Hurricane Katrina in 2005 in New Orleans and restored by a parishioner at St. Dominic Church. (CNS/Courtesy of L'Osservatore Romano)

Parishioner Michael McGee meticulously restored the vessel. Pope Benedict XVI blessed it in March 2006 after a general audience at St. Peter's Square and granted a plenary indulgence to those who prayed before it and fulfilled other condition, reported Peter Finney in The Clarion Herald newspaper. The monstrance was also scheduled to make an appearance at the national V Encuentro conference in Grapevine, Texas. The artifact traveled in 2006 and 2007 to 140 churches across Louisiana and Mississippi to promote Katrina recovery and perpetual adoration.

St. Dominic's also has an active and ongoing relationship with Mount Carmel Parish in rural Haiti, helping parishioners there in ongoing recovery efforts from the devastating 2010 earthquake.