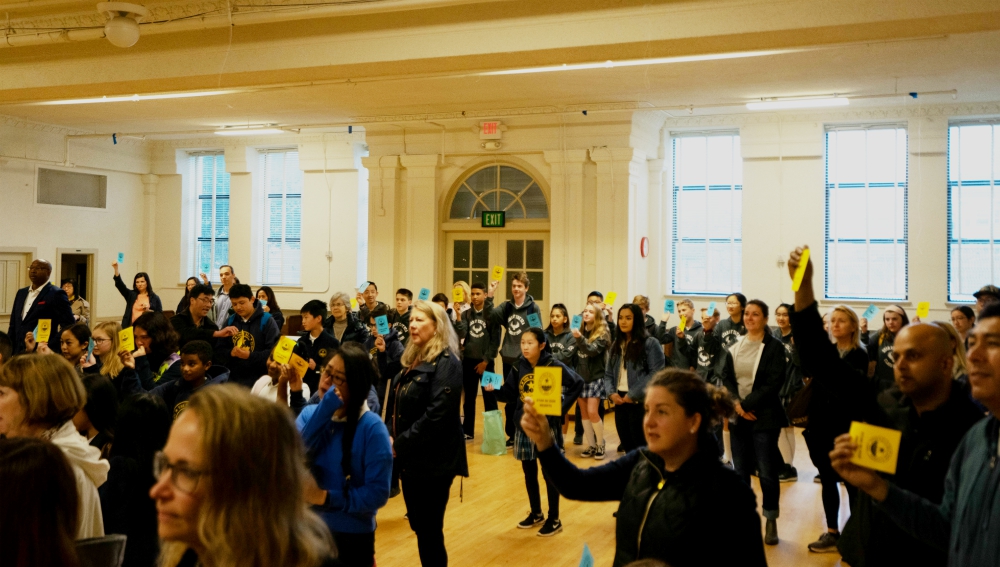 Parents and others gather April 4 at Star of the Sea School auditorium in San Francisco to show support for faculty members who have served the school, which will suspend classes at the end of the school year. (Courtesy of anonymous parent)

While holding his granddaughter in his arms, Jose Ortiz watched news reports "as children were being taken apart and broken apart from their moms." Pastoral assistant for social outreach at St. Charles Parish in Burlington, Washington, Ortiz told Northwest Catholic magazine that he "needed to go beyond prayers" to help. He has spearheaded organization of an archdiocesan-wide pilgrimage, "Walking and Witnessing for Immigrant Families." The pilgrimage will begin April 29 at three cities north, south and adjacent to Seattle — Bellingham, Vancouver and Kirkland, respectively. Pilgrims will converge at the Northwest Detention Center in Tacoma on May 11 where Seattle Auxiliary Bishop Eusebio Elizondo will preside at an 11 a.m. Mass. Parishes along the routes will provide support and hospitality. Privately owned, the Tacoma facility is one of the nation's largest immigration prisons with 1,575 beds. The trek is co-sponsored by the archdiocese, the Washington State Catholic Conference, Catholic Community Services of Western Washington, and the Intercommunity Peace and Justice Center.

Following nearly five years of tension and turmoil, San Francisco's Star of the Sea School will suspend its K-8 operation at the end of this school year, it was announced April 3. Preschool classes will continue, said an archdiocesan statement, as will efforts "to develop an Integrated Classical Program, including curriculum development, market strategy and effective business model." Parental reactions were mostly sadness, reported the San Francisco Chronicle. Many faulted the leadership of Fr. Joseph Illo, named to head the parish in 2014.

Led by Knights of Columbus Council 12458 in Bentonville, Arkansas, parishioners of St. Stephen Parish there over several weeks garnered more than 60 pieces of medical equipment, more than 800 used-but-good suitcases, and hundreds of children's books. The medical gear is made available to parishioners in need; the luggage and books are destined for the Northwest Arkansas Children's Shelter, a 24-hour emergency residential care facility for children who are victims of family violence, neglect, and physical and sexual abuse.

Speaking of the K of C: The fraternal organization's Columbia Magazine reports that St. Katharine Drexel Council 11177 in Cape Coral, Florida, and its women's auxiliary "helped the Sisters of the Blessed Sacrament, the order founded by the council's namesake, convert part of a former post office in Belle Glade into a food bank and diabetes-friendly food pantry to serve thousands in the community." The council is affiliated with Cape Coral's St. Katharine Drexel Parish.

Catholic parishes' work and cooperation with groups such as Alcoholics Anonymous and Narcotics Anonymous is significant and praiseworthy, but "there's more to be done to deepen that friendship, awareness, respect and support," reflects Dr. Tim Flanigan. Flanigan is an infectious disease doctor, faculty member at Brown University Medical School, and permanent deacon at St. Theresa and St. Christopher Catholic Communities in Tiverton, Rhode Island.

How Catholic parishes and other faith communities can respond to the opioid epidemic is the topic of a four-part conference series in West Virginia sponsored by the Wheeling-Charleston Diocese, Catholic Charities of West Virginia, and the West Virginia Council of Churches. The final gathering is scheduled May 18 at St. Francis de Sales Parish in Morgantown.