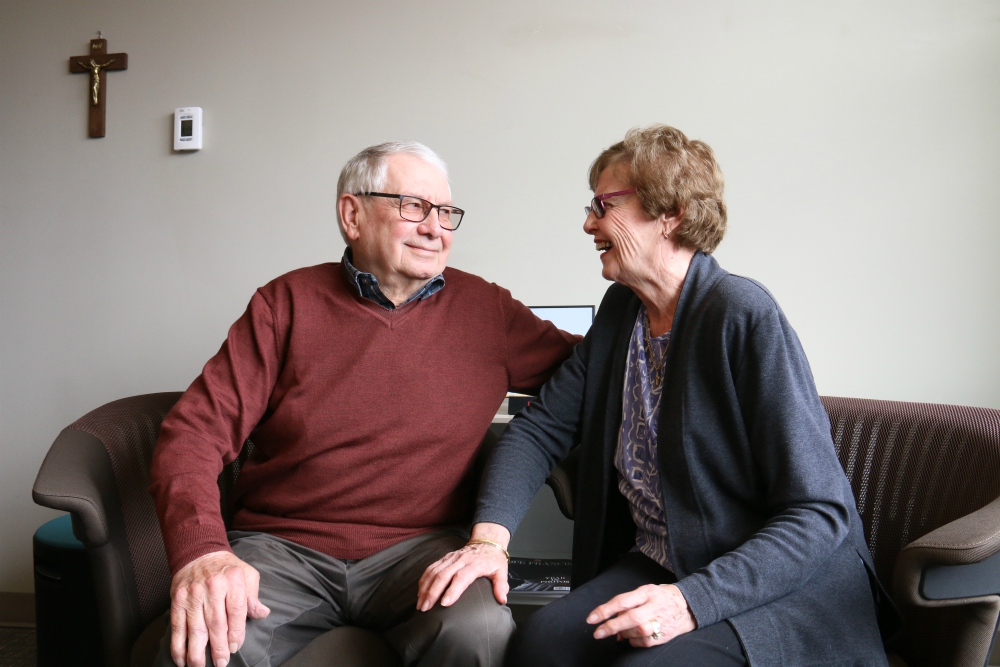 Married 60 years, Stan and Marilyn Pidsadny have volunteered for the past 15 years in prison ministry. (BC Catholic/Agnieszka Krawczynski)

"In 60 years of marriage, Marilyn and Stan Pidsadny have found one of the most fulfilling things they've ever done together is to go prison," reports The B.C. Catholic newspaper. Members of Star of the Sea Parish in Surrey, British Columbia, the couple has been volunteering with the Vancouver Archdiocese's prison ministry program for 15 years and for the past five also with the restorative justice organization Circles of Support and Accountability.

"I never saw it coming, a British royal wedding that brought American black culture center stage before the world!" writes longtime Catholic News Service columnist Carole Norris Greene. Director of the Office of Black Ministry for the Diocese of Brooklyn, New York, in the 1980s, Greene provides a unique perspective on the event.

While homelessness is hardly a laughing matter, laughs will matter June 24 when Christ the King Parish in Hollywood, California, hosts a fundraising performance featuring marquee comedians associated with Catholic Laughs, a venture that fields clean and clever stand-up comedy for Catholic organizational gatherings. The event will support the parish, which has a long history of homeless ministry, and the nearby Center at Blessed Sacrament, a ministry to the homeless "that has drawn praise from many quarters for its holistic and innovative approach," an event organizer told NCR.

Speaking of fun and Catholicism, three young parishioners from the St. Paul-Minneapolis Archdiocese are lead organizers in founding of one of the most recent chapters of the Catholic Beer Club, now operative in more than 20 cities. From different parishes, Isabel Brown, Tim Cahill and Wesley Sandholm met at the Archdiocese Young Adult Cookout last fall and brewed up the project.

In other news from that archdiocese, on May 26 Twin Cities' native Fr. Toulee Peter Ly, 35, became the first American-born person of Hmong ancestry to be ordained a priest. After California, Minnesota is home to the largest population of Hmong-Americans in the U.S., and St. Paul has the nation's largest Hmong-American population per capita. 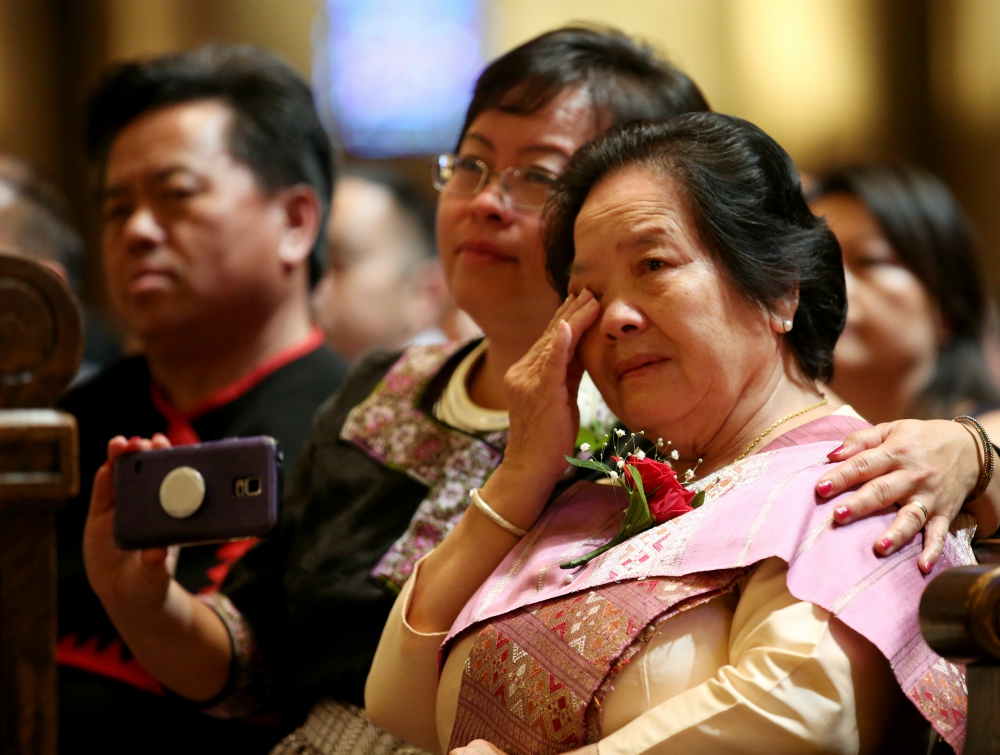 Blia Yang, mother of Fr. Toulee Peter Ly, wipes away a tear during his ordination Mass May 26 at the Cathedral of St. Paul in St. Paul, Minnesota. (CNS/The Catholic Spirit/Dave Hrbacek)

St. Paul Parish in Ellicott City, Maryland, was a helping neighbor in many ways following recent heavy flooding there and nearby Catonsville.

How to fend off discouragement and despair in ministry to immigrants and refugees, notably at the U.S.-Mexico border, was addressed by Jesuit Fr. Sean Carroll during a keynote talk at the May 30-June 1 annual convention of the Catholic Legal Immigration Network Inc. (CLINIC), held in Tucson, Arizona. Carroll is executive director of the Kino Border Initiative, a binational humanitarian organization working at the U.S.-Mexico border. CLINIC was founded in 1988 by the U.S. bishops.

Also during the CLINIC conference, Bishop Jaime Soto of Sacramento, California, said vilification of the Trump administration for its harsh immigration policies should be considered in the light of a long history of U.S. Congress inaction. "They just kicked the can down the road," he said.

And panelists described the intimidation, fear, heat and anguish experienced by persons trying to cross the Sonoran Desert into Arizona. 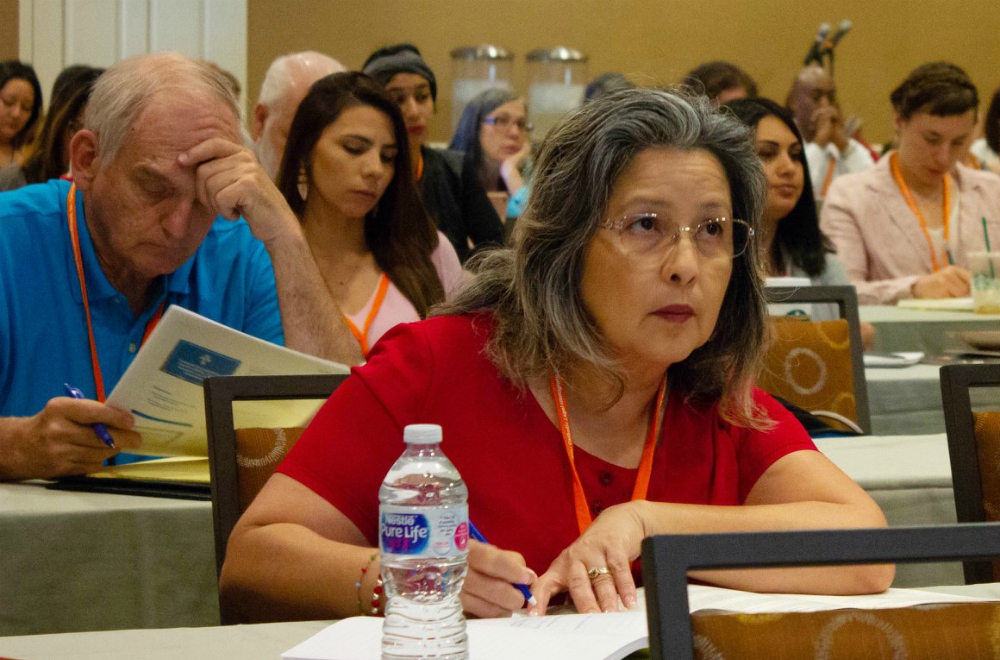 Participants take notes during a May 30 workshop at a meeting convened in Tucson, Arizona, by the Catholic Legal Immigration Network Inc. (CNS/Courtesy of CLINIC)

They are graduates of JustFaith Ministries training. Vic is past executive director of the Volunteer Missionary Movement as well as former director of programs and publications for the National Federation of Priests' Councils.