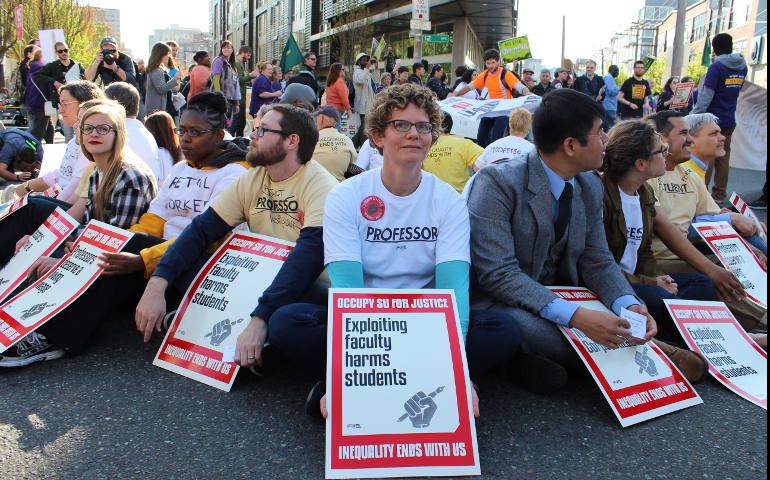 Supporters of unionization of adjunct faculty at Seattle University stage a sit-in April 15 on a street north of the Jesuit campus. More than 20 people were arrested for civil disobedience. (SEIU 925)

Kansas City, Mo. — More than 200 rallies held Wednesday across the U.S., including one here drawing hundreds, marked Tax Day with calls for fair wages for a diverse cohort of labor groups.

The "Fight for $15" that began with a single protest in late 2012 with fast-food workers demanding living wages has since expanded its camp to include other low-wage workers. In many places, janitors, home health care workers, union representatives and adjunct professors stood alongside them in their push for better pay and more resources.

"You can't survive on that job, just can't do it," said Tyrone Branfield, 23, as he watched demonstrators march from Theis Park to the nearby University of Missouri-Kansas City. Employed at McDonald's for six months at $7.50 an hour before quitting, he has since found better work and wages in construction.

"If I'm going to bust my tail and work hard all day, at least give me a decent amount of pay where I can do something with my life," he said.

At the rally in Cleveland, a home health care worker's description of her profession inheriting a greater responsibility of care for those living at home rang true to the experience of an adjunct college professor.

"The similarities are that we are doing important work and not being recognized for it," said Yvonne Bruce, an adjunct English professor. Since moving to the area in 2003, Bruce has taught at several Cleveland-area colleges, including 11 years at Jesuit-run John Carroll University.

"The burden of teaching has shifted, in some cases, almost entirely to adjunct faculty, but the average salary for a part-time faculty worker who works a full-time slate of classes is less than $25,000 a year," she said.

Nationwide, contingent faculty -- adjuncts, part-time faculty, full-time non-tenure-track faculty and graduate students -- make up more than 75 percent of the 1.8 million higher-ed faculty members, according to several reports. A January 2014 study out of the U.S. House of Representatives Committee on Education and the Workforce found an average salary among adjuncts of $24,926, with a median $22,041. It estimated adjuncts would have to teach 17 courses each year -- more than twice a typical full course load -- to receive pay equal to the median for full-time professors, $47,500.

The Faculty Forward campaign seeks $15,000 per course for adjunct teachers.

The day that largely focused on the Fight for $15 also saw several demonstrations at Jesuit colleges, the largest at Seattle University, where more than 20 adjuncts, students, alumni and other workers were arrested on civil disobedience charges for blocking an intersection north of the campus.

Contingent faculty* at Seattle University -- the part-time and full-time, non-tenure-track professors who account for half of the faculty -- voted on unionization in May 2014. The administration sought to have the ballots impounded on grounds that its status as a religious institution placed it outside the jurisdiction of the National Labor Relations Board. In March, a regional labor board rejected that claim and ruled they must count the ballots. The Seattle administration has since appealed the ruling.

In addition to higher wages, adjunct faculty at Seattle University seeking unionization have called for greater resources, such as increased office space -- and greater job security for positions that can often leave professors uncertain if they will be hired for the upcoming semester. The university administration has countered criticisms by highlighting that it has risen base salaries for full-time, non-tenure-track faculty from $24,600 in 2012 to $45,000 for the current semester -- all in the absence of a union.

"I am part of this movement because my future and the future I care about depend on it," said Ben Stork, an adjunct film professor among those arrested, in a press release. "The same ideas and beliefs that inform my teaching and scholarship bring me to working with my colleagues to improve our conditions as workers and educators."

In a statement Wednesday, Seattle University said it "welcomes peaceful demonstrations," and called activism on workers' rights and other social justice issues "part of what a Jesuit Catholic education is about." As for the unionizing push, the school stated "There is a process in place for resolving that issue and it will work itself out in due course. It is a disagreement over means, not the end.

"We share the same goal of supporting our adjunct faculty, who like all faculty are important contributors to our Jesuit Catholic-inspired educational mission," the statement said.

The demonstrations at other Jesuit schools lacked the strife of the Seattle scene. At John Carroll and several other Midwestern campuses -- among them, Rockhurst University in Kansas City, Mo., St. Louis University and Loyola University Chicago -- groups of adjunct faculty and supporters delivered petitions asking each institution to implement a Jesuit Just Employment Policy.

A concept that developed out of Georgetown University's Kalmanovitz Initiative, the just employment policy seeks for schools to apply the principles of Catholic social teaching in its relations with its workforce.

"As students, adjunct faculty, full-time faculty, contract workers, direct employees, community members, and alumni, we call upon John Carroll University to immediately implement a Jesuit Just Employment Policy recognizing all campus workers' right to a living wage, fair and equitable pay and benefits, a safe and just work environment, and the freedom to organize to form unions without any employer interference or retaliation," read the John Carroll petition, which gathered more than 200 signatures, as did the Rockhurst petition. The SLU petition had more than 600 people sign in support.

Compounding the pay disparity, Bruce said it's typical for adjuncts to work without retirement benefits, professional support and adequate office space, all while moving from college to college to teach courses.

"How are we supposed to provide the best education for the students when we can't meet with them?" she said.

She called the situation for adjuncts at John Carroll "frustrating" but noted the administration has seemed receptive to their concerns in the meetings they've held. Aiding their cause she believes is student support for better conditions for cleaning staff that is now represented by the Service Employees International Union, which has worked with adjunct faculty on numerous campuses and assisted in organizing the Fight for $15 rallies.

"This is starting to hit a nerve with people because tuitions are skyrocketing relative to wages, which have remained largely stagnant for the last 30 or 40 years. But where is that money going? It's not going into paying the educators," Bruce said.

In delivering the petition at Rockhurst, Nicola Matthews, an adjunct in the business school, connected their cause to the construction of a new academic building to be named after Jesuit Fr. Pedro Arrupe, superior general of the order from 1965-1983.

"During his life, Father Arrupe was an outspoken advocate for social justice. He called on all Jesuits and Catholics to put justice at the center of their education and mission. While we acknowledge the importance of maintaining and upgrading the brick and mortar classrooms, labs, and lecture halls of this university to ensure the future success of its students, we believe the university must make an equally concrete commitment to its students by demonstrating justice to the people who build, teach, lecture, clean, and otherwise support the daily operations of this campus," she read from a prepared statement.

Nicoya Helm, an adjunct professor at the University of Missouri-Kansas City and Penn Valley Community College, said the group of 15 professors and supporters targeted Rockhurst not necessarily in response to current conditions but more to challenge it to lead on an issue of growing concern on all campuses.

"Jesuit universities and colleges have historically been leaders in social justice, and so it seems right that they should set the standard and set the tone for other educational institutions," she said.

Speaking to the significance of holding the rallies for higher wages on the deadline for filing income taxes, Bruce of John Carroll said the purpose of paying taxes is to give up something for a greater good.

"We're paying taxes for safety, for infrastructure, for civilized living, and that's essentially all we're asking. We're happy to give back to the community but we need something for ourselves before we can do that," she said.

*This post was updated to clarify who is considered contingent faculty at Seattle University.

Parish | Adjunct faculty join Fight for $15 rallies across the country

Miners in Kentucky are still feeling the hurt

Mary Poppins takes on Republicans in Funny or Die skit