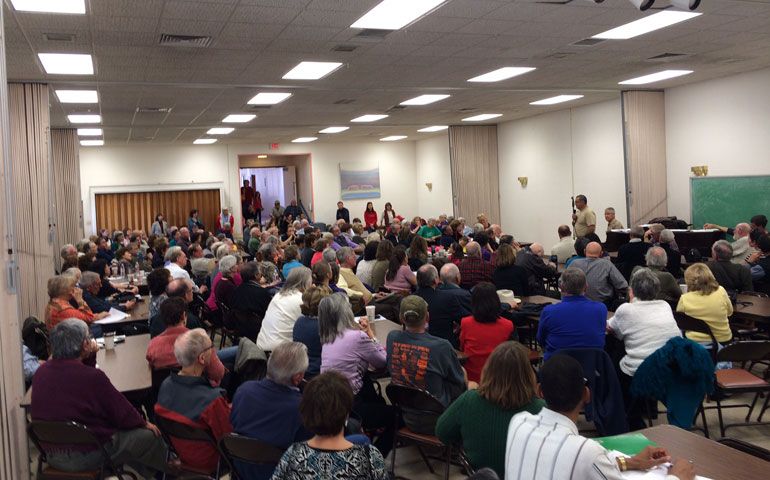 The Dominicans who have served the University of New Mexico's Aquinas Newman Center in Albuquerque since 1950 were told Jan. 13 that they would be replaced July 1. The Santa Fe archdiocese assured parishioners in a press release that "fine young priests" were taking over.

Without previous consultation, Archbishop Michael Sheehan told the pastor of Aquinas Newman Center that the Dominicans' service to Newman Center would be terminated in less than six months. Sheehan also made the surprising announcement that only two diocesan priests would replace the four Dominican priests and one brother currently staffing the center.

"The parishioners are very progressive, very intellectual, and they resonated with the way we preached," Davis said. "The Newman Center tends to be a conglomeration of disenfranchised Christians from around the city -- which confirms the very things that the bishop is contesting."

Chuck Wellborn, a former University of New Mexico student and longtime parishioner of the Newman Center, circulated an email to parishioners that echoes Davis' suspicions: "The Archbishop has made critical statements about our parish to others in the Archdiocese. ... These comments suggest that he believes our parish is insufficiently doctrinaire. It is certainly true that the Newman Center attracts parishioners with a wide variety of backgrounds and views, in particular university students and faculty. In that sense, our parish is quite dissimilar and perhaps more liberal in its thinking than at the Archdiocese's non-university parishes."

Sheehan is quoted in the archdiocese's press release as saying, "Having archdiocesan priests at the Newman Center will enhance relations with pastors and parishes of the archdiocese whose young adults attend [the University of New Mexico], as well as promote diocesan vocations."

Davis reiterated, "The whole issue of vocations is what's at play here."

He explained that the Dominicans don't aggressively promote religious vocations, but rather strive "to be an academic community."

"Over a 50-year period, we've had maybe eight or so [religious] vocations. We have one right now -- the first in the last six or seven years," Davis said.

The archdiocese's vocation director, Fr. Michael DePalma, was chosen as the new pastor of the Newman Center. He is a University of New Mexico alumnus. Fr. Simon Carian, 26, who was ordained less than a year ago, was chosen for the role of parochial vicar. Carian is a University of Notre Dame alumnus, and he is currently studying medical ethics in Rome. As the press release points out, DePalma and Carian are "young priests."

The Dominicans, on the other hand, are not.

When Wellborn spoke to NCR about the Dominicans' departure, his voice filled with emotion. "Fr. George [Reynolds] is 82, and when he came [to the Newman Center], he said he had brought his casket with him. Now he has to pack it up."

In the April 2013 Santa Fe archdiocesan newsletter, People of God, DePalma wrote that the "average age of our new seminarians is much younger. It is a national trend ... that is definitely present in our archdiocese."

DePalma speculates as to what is causing this trend, and he attributes it to "the great influence of John Paul II and Benedict XVI on the youth. Our last two popes were great inspirations to many of our young adults in motivating them towards considering a religious life."

A homily of Sheehan's, printed in the October 2013 People of God, reveals similar leanings. "Now I must admit that some post [Vatican II] activities were not so good. Some people went to extremes in liturgy and in moral living and twisted the true meaning of the council documents. We are back on track now thanks to Pope John Paul II and Pope Benedict XVI."

A letter to the editor printed Jan. 29 in the Daily Lobo, University of New Mexico's student newspaper, also displayed these concerns. Colt Balok wrote that the Newman Center "needs to be a place where the body and blood of Christ is adored and worshipped, not a place where the altar servers wear polo shirts and fail to honor and respect our Lord Jesus Christ. ... Thank you, Archbishop, for making the Newman Center Catholic again. My friends and I will no longer have to travel to other parishes to attend Mass."

Balok posted on his Facebook page Jan. 13 a picture of himself having dinner with Sheehan. The caption read, "I had a great dinner with Archbishop Sheehan tonight. UNM, he has some great news for us Catholics!"

"We have a pre-Vatican II archbishop," Wellborn told NCR, but the Dominicans run the Newman Center like "a Pope Francis church."

After Sunday Masses Jan. 19, Wellborn gathered 700 parishioners' signatures on a petition addressed to the archbishop expressing "grave concern regarding the replacement after 62 years of the Dominican religious community." The petition requests dialogue between the archbishop and "a delegation of responsible lay leaders from the Aquinas Newman Center parish" before Sheehan makes an "irrevocable decision."

That night, close to 200 parishioners gathered for an informal meeting about the leadership change. Wellborn said, "The dialogue was really wonderful. ... It was not angry talk, mostly how unique our community is, with many saying they don't know of a Catholic parish that is similar and that they would be at sea without it."

The petition was delivered to the archdiocese Jan. 20, but when the archdiocese issued a press release Jan. 21, there was no mention of the petition. Instead, Sheehan is quoted as saying, "I hope and pray for a smooth transition. I would hope parishioners of the Newman Center will give my new team an opportunity to prove themselves."

By the following Sunday, Jan. 26, the petition had more than 1,000 signatures. More than 200 parishioners attended another community meeting, and from that meeting's notes, the purposed plan of action ranged from "Start praying a Novena regularly" to "Have someone go directly to Rome."

"I have attended several parishes throughout the archdiocese and this is the only parish where I have seen young adults attend," a parishioner said at the meeting. "Young adults are drawn to this parish and the Dominican priests. If something is not broken, why fix it?"

Another said, "I've looked around at many other churches and I chose Newman. If it changes, I don't know where I will go."

A Facebook page, "Save Our Dominicans," was created based on feedback from the parish meeting. One of its first posts is a link to San Ysidro's Jan. 26 church bulletin, in which DePalma wrote a farewell letter to his parish.

In the letter, DePalma seems pained to speak of the future: "Yes, last weekend's news of my leaving to go and become the pastor of the Aquinas Newman Center at UNM still has my head spinning and I'm sure that many of you are still hoping that my announcement is some sort of prank and that everything will go back to normal. Life has a way of sometimes being quite unfair."

"It does seem so strange to cause this much grief to two communities," Suzanne Marie Buck wrote. "Some Catholics are just hanging on by their teeth -- why would we want to create an atmosphere of instability and uncertainty?"

LaDonna Giron simply stated, "Sounds like sadness for all around."

DePalma revealed similar emotions in his letter, writing, "What is going to happen on July 1st when I have to report to the Newman Center is that a father will have been taken away from his children. ... This will be my fourth move in my 11 years as a priest, and I'm getting a little bit tired of having to leave my spiritual children every 3 to 4 years."

"I asked [the current pastor, Fr. Rob Clements] about vocations, and he said that [Phoenix] Bishop [Thomas] Olmsted's expectations were unrealistically optimistic. I suspect the same is true of the Archbishop of Santa Fe," Thompson wrote in an email shared with NCR.

Thompson also noted, "The Office Manager told us that though attendance at the new Chapel has been good, that has not translated in increased offerings; they have not yet replaced the financial base of non-student supporters they had before."

The students at Aquinas Newman Center gathered for dinner Jan. 26 and a similar concern arose -- that the leadership change would cause non-students to leave. Student coordinator Catherine Loweree wrote in an email to NCR, "Many students said that while they want to fight the decision, they feel we should accept whatever the outcome is and preserve the community as best as we can. Many are concerned that people will leave and there will be nothing left of the community that the students love."

Davis agrees, saying that he reminds his congregation, "We've been preaching peace and justice a long time -- let's not go to war over this. Don't take it out on the next guy."

"Maybe we need to die before we can be reborn."

This is in reply to your January 20 letter in which you enclosed a petition. ... I am reluctant at this time to have a meeting with parishioners as they seem to be emotionally charged right now. ... I hope that we will have a smooth transition and that the parishioners will give the new Diocesan Team of young priests a chance. ...

Unfortunately many untruths have been published in the secular newspaper; and have taken the form of rumors which I have received via emails, phone calls and regular letters. ...

The decision to make this change was not done using "pre-Vatican II" methodology. In the spirit of Vatican II, I did consult many people before making this decision. ...

By the way, I had my staff check the signatures on the petition against the list of those registered at Aquinas Newman Center. Of the 704 signatures, many were not from registered families.

Please know that I have also received letters in support of this decision. ... I ask that you be part of those who will embrace the transition. ...