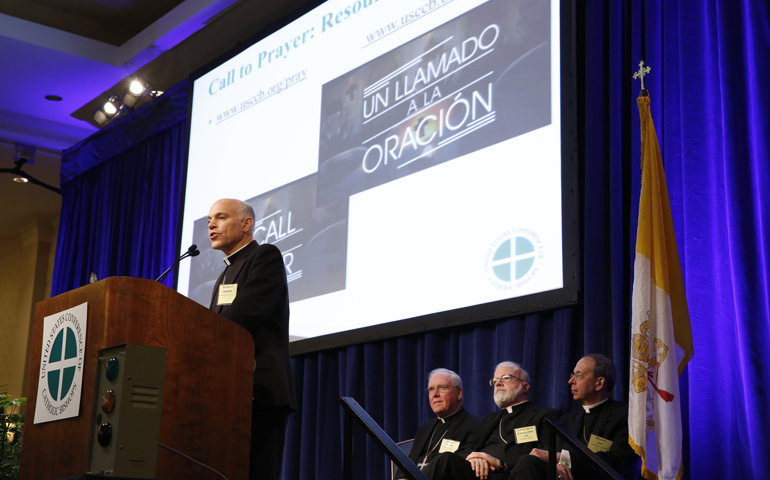 The Supreme Court's ruling that rendered the federal Defense of Marriage Act unconstitutional, and the Senate's passage Nov. 7 of the Employment Non-Discrimination Act put the legal defense of marriage "at a critical point in this country," said the archbishop who heads the U.S. bishops' Subcommittee on the Promotion and Defense of Marriage.

The Supreme Court's DOMA decision is now being used to judicially challenge marriage laws in more than a dozen states that still recognize marriage as the union of one man and one woman," said Archbishop Salvatore Cordileone of San Francisco.

The effects of ENDA, Cordileone said during a presentation Monday at the U.S. bishops' fall general meeting in Baltimore, "go much further" than preventing employment discrimination on the basis of sexual orientation and gender identity to the point where "ENDA-like laws have contributed to the erosion and redefinition of marriage at the state level."

The bishops, though, voted 203-17, with five abstentions, to extend through 2016 a "Call to Prayer for Life, Marriage and Religious Freedom," originally intended to coincide with the now-ended Year of Faith and was itself scheduled to end with the Nov. 24 feast of Christ the King.

Cordileone said the language in the DOMA ruling was "particularly disheartening, setting a troubling precedent for increasing efforts to redefine marriage."

He added, "The legal and practical implications are significant, implicating the more than 1,100 federal statutes in which marital status is a factor for determining rights, benefits and privileges."

According to Cordileone, "the State Department has indicated that the U.S. government will now recognize same-sex marriages performed in foreign countries where marriage has been redefined."

One remedy, he said, could come in the form of the Marriage and Religious Freedom Act, which would bar the federal government from discriminating against those who "act upon their religiously motivated belief that marriage is the union of one man and one woman, or that sexual relations are properly reserved for such a marriage." The bill's scope would include protection for individuals and organizations, both nonprofit and for-profit.

Cordileone pointed to a case in New Mexico where a unanimous state supreme court ruled that a photo studio must photograph a same-sex commitment ceremony "if they wish to remain in business."

He noted that of the 15 states that now permit same-sex marriages, voters in only three of those states actually gave their approval for marriage definition." (Illinois became the 15th state to legalize same-sex marriages when the state House passed the Senate bill; the governor must still sign the measure into law but he has promised to do so.)

In asking for an extension for the call to prayer, Cordileone noted it had gotten a "favorable response from the field," promotes the new evangelization, is simple, flexible and adaptable, follows the collaboration principles in the U.S. bishops' strategic plan, and gives Catholics the "opportunity to do what we do best: pray and fast."

Cordileone said the Friday fast reminders were "one of the most popular regularly scheduled viewed items ever" on the U.S. Conference of Catholic Bishops' website. As to its flexibility, the call to prayer was able to incorporate Pope Francis' plea for peace in Syria this summer.

"The need is evident, and we are only at the beginning," he said. "This has great potential to make a significant impact in the lives of the faithful, given enough time and promotion."