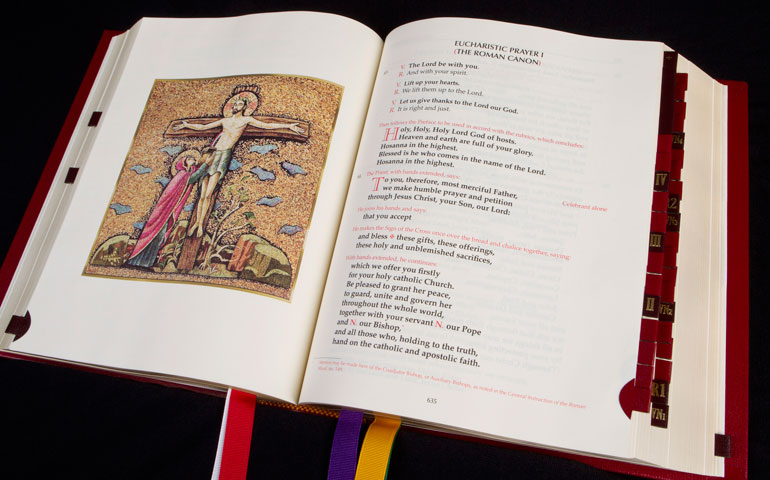 The first eucharistic prayer is seen on a page from a copy of the new Roman Missal in English published by the U.S. Conference of Catholic Bishops.

The first Sunday of Advent, Dec. 2, marks one year since the new translation of the Roman Missal was implemented in parishes in the United States and much of the rest of the English-speaking church. Here's the good news: The transition to the new English missal has gone better than many of us expected. After a month or two of awkward and hesitant liturgical exchanges, the people in the pews seem to have gotten used to the new texts. By now the responses mostly come automatically, as ritual texts should. New musical settings are starting to become familiar. Despite the misgivings many of us had about the missal, we labored mightily to make it work, and we pulled it off.

I suppose a bishop who had wondered how much flak he'd get can heave a sigh of relief a year later and say to himself, "It worked." I suppose a curial official intent on "reforming the reform" can say to himself, "We got away with it." The people are putting up with it, the clergy didn't rise up in revolt. Call it a success.

But do we really want to set the bar that low?

What about building up the church in love and peace? What about a buzz of excitement around a widely welcomed liturgical improvement? What about strengthening the bonds of mutual respect between the hierarchy and liturgical scholars? What about having church leaders we're proud of?

I don't see much evidence of that.

Anecdotal reports suggest that many people in the pews don't embrace the new missal very warmly and still don't see the reason for the change. "Why?" is the question I hear most often. "Why did they do this?" When the dental assistant at my last appointment learned I'm a priest, she told me that some things don't make sense to her now, "like 'consequential,' or whatever it is, in the creed."

The reaction to the new missal mostly seems to be mild bemusement or irritation or confusion, but not protest or outrage. When it comes to liturgy, Catholics are quite patient. Most Catholics have no reason to track the dirty politics behind the scenes of how the Vatican centralized and micromanaged the translation process beginning in 2001, threw away 17 years of transparent and collegial work on a very fine revised English translation, and botched the new missal by making some 10,000 mostly ill-advised changes at the last moment.

And when they're attending liturgy, most Catholics are probably also not tracking the convoluted and inelegant language of the new missal. I haven't heard anyone report they've detected more scriptural allusions in the revised priests' prayers. It's rather easy to tune out what lacks appeal, and people's reduced attention to liturgical texts is a significant piece of why "it worked."

There is some heartfelt and enthusiastic support for the new missal. It is limited to a small band of the church, as anyone who spends much time in the Catholic blogosphere can attest. These are the traditionalist conservatives most upset with the direction of liturgical renewal since the Second Vatican Council and most anxious to "reform the reform." From this quarter, and only from there, comes the claim that the new texts are beautiful and poetic. One wonders whether this small group isn't increasingly the bishops' base of support, whether it's the missal or any other church controversy.

In the discussion of liturgical translation at the November meeting of the U.S. bishops' conference, Bishop Robert H. Brom of San Diego and Bishop Salvatore R. Matano of Burlington, Vt., offered contrasting visions of leadership, church unity, collaboration, and the relationship between bishops and priests. This is significant, for the new missal isn't just about texts -- it's also about power.

Brom expressed opposition to retranslation of the Liturgy of the Hours and other liturgical books because of negative reactions to the new missal on the part of priests. "I have listened to priests," he said. They have difficulty with "complicated and awkward phrasing" and "strange vocabulary" that make the new prayers "aggravating." The priests expressed "in something of a unison" that the new missal "is more of a burden than a blessing." Priests are anxious that they will not be heard by bishops. "We should be asking, how is the new translation being received?" Brom advised not rushing headlong into further translations until work is done on improving the missal.

Matano was of a different mind. He thinks it would be "counterproductive" to critique the new missal, when "so many of us are doing everything possible … to create unity in our dioceses." Critique "only opens the door for further criticism and disunity." We should simply accept the missal, support and encourage it, and use it to "communicate again the awesome and transcendent nature of the liturgy." With proper preparation for the Mass, the new texts "can be prayed in a very beautiful manner."

In this second view, bishops promote unity by stifling criticism, with the expectation that everyone accept their decisions in obedience. The new missal is but one among an increasing number of instances in which church leaders are pushing this second view of authority more strongly.

The problem that keeps coming up and won't go away is the credible exercise of authority. It is a structural issue that has to do with power and accountability. The new missal has shown us how a secretive central authority, absent mechanisms of accountability, can impose its will. Of course, top-down absolute monarchy need not malfunction in this way. In the Catholic model of governance at its best, the ruling class is accountable to the Gospel and exercises authority humbly and lovingly, with a listening ear and a view to consensus, though the institutional structures do not require this.

The proper response to the new missal is not to storm the Bastille and topple the monarchy (though it is interesting that the small group inclined to this view seems to be growing). Most Catholics are merely disappointed and irritated, which is hardly the basis for a revolution. Most of us who see the deeper problems represented by the missal are committed to working collaboratively with our leaders to make a constructive contribution to the renewal and reform of our church. It is not unreasonable to hope that voices like Brom's will grow louder, with a revision of not just the missal but also the misguided translation principles that made it possible. And let it be said, there are certainly some good things in the new translation worth retaining.

To frame the question accurately is one of the most important services we can offer. There are issues of collegiality and the violation of Vatican II's explicit stipulation that approving translations belongs to bishops (not the Holy See); ecumenism and the abandonment of liturgical texts formerly held in common with our Protestant brothers and sisters; inculturation and the imposition of a liturgical aesthetic from above onto widely diverse cultures; and collaborative leadership and the rejection of input from experts in liturgical translation. There is much to face up to.

Short term, we must all work together to make our current church structures work as well as possible. Longer term, we must be open to the promptings of the Holy Spirit when the time is right to change structures. Let us hope and pray that our response to the new Roman Missal, and so many troubling issues like it, truly contributes to the renewal of our church.

A version of this story appeared in the Dec 7-20, 2012 print issue under the headline: Bar is set low in acceptance of year-old English missal.